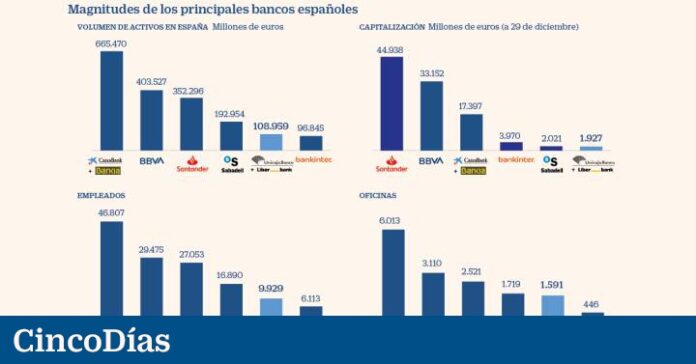 The merger between Unicaja and Liberbank threatens to take away from Sabadell its position as the fifth largest Spanish bank. And the difference is just 100 million euros: the entity chaired by Josep Oliu closed the session on the Stock Exchange yesterday with a capitalization of 2,021 million for the 1,927 million that Unicaja and Liberbank would add.

Although at the moment the way to calculate the size that the resulting entity will have is by adding the magnitudes of both, without taking into account the correction that the market may apply and the adjustments that occur in the integration, the operation will create a new large bank that It will compete with the Ibex majors: it will be the fifth largest bank by volume of assets, it will have the fifth largest staff and it will also control the fifth largest branch network on the Peninsula.

With regard to the number of employees, the new entity would have a workforce of 9,929 workers, which means being above Bankinter (it had 6,113 employees at the end of September) but well below the rest of the large banks. However, it must be borne in mind that one of the reasons for undertaking a bank merger is to add synergies through the closure of duplicate branches and the reduction of employees with the aim of improving efficiency and profitability. Therefore, once the operation is carried out, an adjustment will foreseeably occur.

The unions, in favor of the union between the two entities, already have a staff reduction, although they hope that it will not be massive and will be carried out through voluntary departures and early retirement, as has been done in the sector in recent months . In addition, they consider that the possible adjustment may be due to an oversizing of the central services and not so much due to the closure of offices.

And it is that although a cut in the branch network is also expected, analysts estimate that the overlap between both entities is low and would be limited to a figure of less than 10%, so that the possible cost savings would also be limited.

Each bank has the bulk of its network in complementary autonomous communities: Unicaja dominates in Andalusia and Castilla y León and Liberbank has a greater presence in Asturias, Castilla la Mancha, Cantabria and Extremadura, since it includes the heritage of Cajastur-Banco Caja Castilla La Mancha (CCM), Caja Cantabria and Caja Extremadura.

According to Álvarez & Marsal’s calculations, the merger between Unicaja and Liberbank has a return on investment of 270%, with a generation of value that would amount to 1,000 million. Restructuring costs could amount, according to analysts’ estimates, to around 290 million, to which would be added the new provisions and endowments.