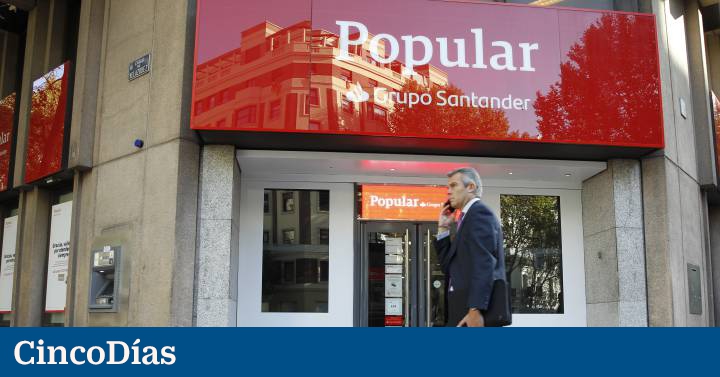 Santander has divested itself of most of the branches inherited from Popular. Almost five years have passed since the bank chaired by Ana Botín took over the entity after its bankruptcy, barely 350 of the 1,400 branches that joined its network are still standing as of September 2018. This means that Santander has already closed 75% of the offices that were integrated into the group, practically eight out of ten branches.

According to sources from the entity, when closing offices, usual criteria are taken into account in network restructuring processesas the location of the establishments, the size of the premises, duplications, conditioning or possible contractual conditions, depending on whether the properties are rented or owned. In addition, the same sources detail that in the months prior to Santander taking over Popular, the entity had begun an investment plan in its offices to update them, so that, in many cases, Santander branches were, in general, , larger and more modern than Popular.

In no case, they point out, have the closures been carried out taking into account the bank of origin of the branch, since, once integrated, all the branches form part of the same banking group.

At the end of September 2018, when Santander made the absorption of Popular effective, the group had in Spain 4,469 offices, of which 1,400 came from Popular (31% of the network), according to data from the Bank of Spain. At that time, Popular had at least one branch in each of the 50 Spanish provinces and in the two autonomous cities (Ceuta and Melilla).

Comparing the postal addresses of the offices that Popular had before being absorbed and the locations of Santander’s current branches, the number of offices that remains standing is the aforementioned 350. At the end of 2021, the banking group had 1,998 offices in Spain (less than half that of five years ago) so that the establishments absorbed from Popular represent around 17.5% of the network.

Anniversary of the ‘rescue’

2022 marks the fifth anniversary since Santander legally absorbed Popular, but the entity chaired by Ana Botín really came to the rescue of the bank failed a year earlier, in June 2017. On the 7th of that month, the European Single Resolution Mechanism (SRM) decreed the sale of Popular to Santander for the symbolic amount of one euro due to the deterioration of the entity and the risk that it would not have sufficient liquidity to serve its customers. .

Although with the sum of the banking business that Popular had at that time, Santander announced that it would become the first entity in the Spanish market in terms of market share in loans and deposits, the entity also had to carry out a capital increase for 7,000 million of euros with the aim of digesting the absorption, since it did not receive any public aid.

In fact, it was the first time that the MUR decreed a dance in of a private financial entity, which means that it is the shareholders and owners of debt that can be calculated as capital who lose their investment to avoid putting state aid on the table.

Banco Popular was founded in 1926, with management focused on Spain, Portugal and Mexico. Historically, it was one of the most profitable and efficient entities in Spain, with management characterized by prudence. However, it changed its strategy in 2006 with investments in the real estate sector, which collapsed as a result of the economic and financial crisis that Spain suffered from 2008.