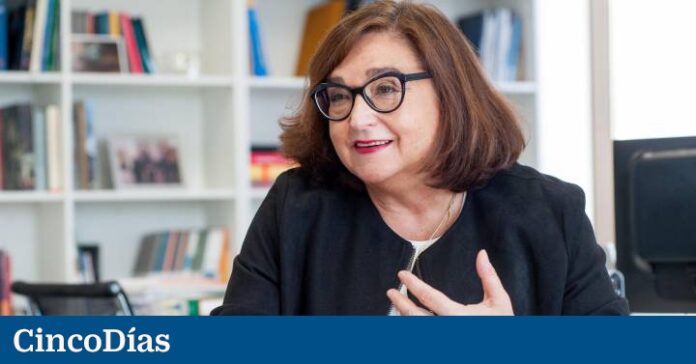 Marina Serrano came to the presidency of Aelec (heir to the historic Unesa) in October 2017. Her extensive experience in the sector (she has held senior positions at REE and the former National Energy Commission; she is now a director of OMEL and vice-president of CEOE) supports her to lead the Association of Electric Energy Companies (Aelec), which, arising from Unesa, has represented the large companies in the sector (Endesa, Iberdrola, Naturgy, EDP Spain and Viesgo) for more than two years. Serrano comments in an interview with Five days the lines of the National Fund for the Sustainability of the Electricity System (FNSSE), with which the Government intends to reduce the electricity bill by 13% in five years after removing the cost of premiums for renewable energies from the receipt.

The FNSSE, still in the draft law phase, will assume the costs associated with the specific remuneration scheme for renewables, cogeneration and waste (Recore), which amount to 7,000 million euros per year. The subjects obliged to finance it will be the marketers of all energy sectors. In Serrano’s opinion, it is “a necessary measure that balances the rules of the game among all energy consumers.”

“The financing of the efforts or costs that are made to decarbonise electricity through renewables must be borne in an equal way and shared by all,” he replied when asked about the criticisms expressed by the CEO of Repsol, Josu Jon Imaz, who went on to say a few days ago that the FNSSE will only serve to “pay for the electricity parties.” “Other energy consumers have not been adequately decarbonized and that cost must be shared; we are in a global environment ”, warns Serrano.

According to the economic report of the bill, the oil companies will be responsible for financing 43.7% of the premiums for renewable energies by 2025, which represents some 2,085 million euros. The president of Aelec clarifies that even with the new fund, “the electricity sector will continue to bear the burden of renewables to a greater extent.”

The president of Aelec also highlights that the fund has “Gradual, with a five-year implementation schedule”, and includes exemptions and bonuses for sectors that may be most affected. Exemptions include electricity consumption for storage, agricultural diesel, natural gas for cogeneration and electricity generation. In the discounts for indirect costs that could be derived on consumers are professional diesel, the electro-intensive industry and the consumer of natural gas.

According to the Ecological Transition, there will be between 500 and 1,000 companies affected, but Serrano believes that these will not transfer the cost of financing the fund to the consumer by any other means (other than the electricity bill). At first, “the measure will be neutral for the energy consumer, since it will be distributed among the various energy vectors,” he says. And in the end, “the measure for the electricity consumer is going to mean a price drop,” he highlights. It ensures that Aelec’s calculations coincide with those of the Government in the reduction of the electricity bill, around 13%.

“[El FNSSE] it is going to suppose a reduction of price for the consumer that was necessary; Electricity is in all households and especially affects the lowest incomes and most vulnerable consumers. And it occupies the highest percentage in your basket of consumer goods. In addition, today’s electrical model is different: the consumer will be able to store and produce their own energy, pour into the grid. At the end of the transitional period it will benefit ”, he highlights.

Investment funds will be an important contribution to achieve decarbonisation

The Government has also just given the green light to the Statute of Electro-intensive Consumers, pending since April 2019. Although it plans to benefit 612 companies with high electricity consumption, reducing their electricity bill and increasing their competitiveness, there are associations such as the Asturian employer’s association Fade that warn that it has fallen short, leaving out many companies.

For Serrano, “it makes sense that those companies with high energy consumption have a specific regime like this.” “It is also linked to renewable consumption with clean energy. It will allow the recovery of the industry. Investing in renewables means taking advantage of the values ​​that we have as a country, such as the wind and the sun ”, he explains.

The Government will hold the first renewable auction since 2017 on January 26, kicking off a calendar to auction 20 GW until 2025. The president of Aelec supports this mechanism. It highlights that it gives visibility to the path towards compliance with the National Integrated Energy and Climate Plan (PNIEC). “It is important to make all the planned investments in renewables and to comply with all the elements of the PNIEC. If we want greater ambition, it can only be achieved with more electrification, which is what this national fund makes possible. [el FNSSE]”, He argues, highlighting that renewables“ are more or less small investments ”.

On the other hand, Serrano affirms that investment funds make an “important contribution” to achieve decarbonization. “BlackRock is the last to have that sustainability poster. The regulation of access to the networks is necessary because they are limited and a natural monopoly cannot extend unlimitedly in the territory ”, he adds, ruling out that a new bubble in renewables is being generated with the new regulation.

For sectors where electrification is not so easy, such as heavy transport, Serrano points out that the so-called green hydrogen It’s a good solution. Spain “is well positioned to be a leader” in this technology thanks to the amount of renewables it has. “It has to be produced close to where the consumption is to avoid transportation and distribution costs. It is one of the elements to follow and it will have its place ”, he says.

The Government plans to mobilize 8.9 billion euros in investments related to green hydrogen. This will contribute, according to Serrano, to meeting the EU’s new CO2 emission reduction targets, which has expanded the cut planned for 2030 from 40% to 55%.