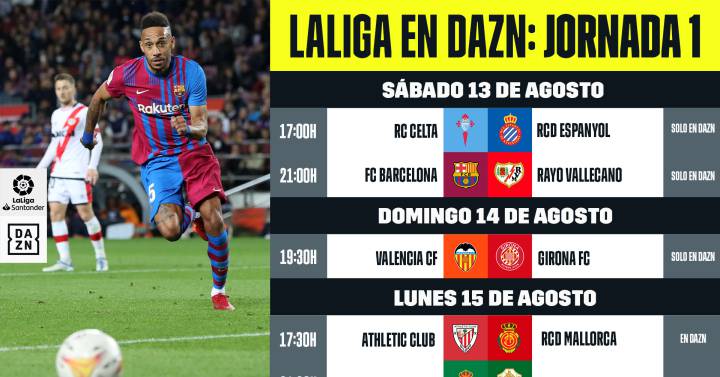 LaLiga began this weekend with the news of the incorporation of Dazn to broadcasts in the First Division, as holder of the exclusive rights to five games in 35 days until 2027. The global streaming platform, unlike Movistar+, has opted for its own production of the signal, displacing narrators and commentators to the stadiums themselves, and with half-hour pre- and post-matches.

However, the first weekend of Dazn in LaLiga has also featured the app access issues that users began to report, especially on Saturday night. The platform itself informed its clients last Wednesday that, if they intended to change their subscription to the plans that include LaLiga matches, they should do so well in advance due to the high demand. “We want to inform you that, due to the high demand for requests, changes to the Dazn Total and Dazn LaLiga plans may take up to 24 hours to complete. In case you intend to make any changes to your subscription, we recommend that you do so with at least one day in advance so that you can access the content of LaLiga from the first day,” he explained in an email.

This high demand for applications was confirmed during the following days, not only by those who contracted directly with Dazn, but also by customers who arrived from Movistar + and Orange. These two companies have included the Dazn LaLiga channel in their offer. In the decoders of both, this appears as one more of the grid, but so that the subscribers of the two telecoms can watch these matches on other devices, such as smartphones or tablets, they must create an account and access through the application of the streaming platform.

A funnel that caused the first problems in the FC Barcelona-Rayo Vallecano on Saturday night. Sources from Dazn Spain explain that the service was given normally in the first game broadcast that day, Celta-Espanyol, but that they detected “stability” issues on the platform during the night game, and that prevented some users from accessing the service in the first part. In addition, Movistar and Orange customers could not activate their subscription. Faced with this situation, Dazn and the telecoms activated the emergency plan for Sunday: to include the Dazn soccer channels as one more within the telecoms’ applications.

The DAZN soccer CHANNELS will be available on the Movistar+ App today.

Movistar customers will be able to access the channels section of the M+ App to be able to enjoy all the matches from their devices.

However, the problems continued. Users from Spain, and from other key markets for Dazn such as JapanGermany and Italy, experienced platform access problems throughout Sunday afternoon. In the Spanish case, coinciding with the broadcast of Chelsea-Tottenham in the Premier League, or Valencia-Girona. The customer watched as he was suddenly kicked out of the app, which then required him to enter his email and password. Once entered, an error message appeared that prevented access.

In the Spanish case, Dazn provided users, through social networks and push notifications, with an alternative access link before Valencia-Girona in the event of possible “access problems”. For those who accessed regularly, the problems were repeated for several moments in the afternoon.

From Dazn it is explained that there was a global stability problem, which affected customers from several countries, which is separated from the high demand experienced in Spain for the start of LaLiga. Platform sources indicate that work is being done to guarantee that stability for the two games that will be offered this afternoon, Athletic-Mallorca and Betis-Elche. In the event of problems, an alternative entry link to the app will be offered. On possible compensation, from the company they limit themselves to expressing their “effort” to solve the access problems.