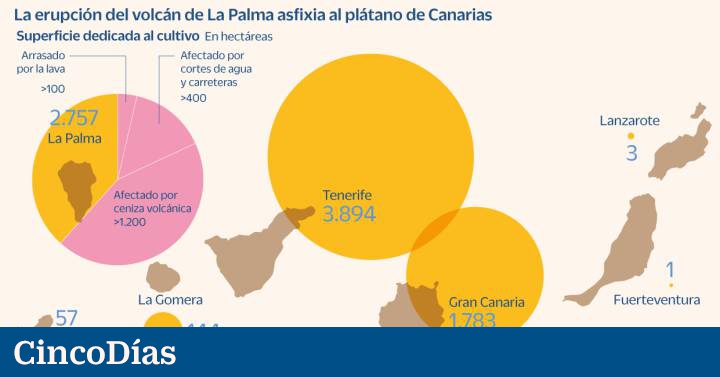 President Pedro Sánchez ate a Canarian banana during a recent official act in solidarity with the farmers affected by the La Palma volcano eruption. Other authorities and public figures have made similar gestures. But it will take more than a bite to save the banana industry from disaster.

The Canarian banana is one of the most popular fruits in Spain and since November 2013 it has been protected by a community quality seal. However, since the European market was opened to free competition in 1993, its producers have relied on aid from Brussels to be able to compete with lower banana prices. Subsidies that from time to time are threatened with cuts.

The ravages caused by the geological phenomenon have focused on a sector that employs 15,000 people throughout the archipelago (between 7,000 and 8,000 only on La Palma) and that contributes 2% of the regional GDP (and around 10% of the island’s GDP).

The lava has already destroyed more than 100 hectares of banana plantations, but if to these are added those harmed by the cut off of the water supply or the blocking of access, the compromised area reaches 400 hectares of banana and 100 of vineyards and avocado , according to the Coordinator of Organizations of Farmers and Ranchers (COAG) of the Canary Islands.

And if to the latter are added the areas covered by ash –which causes scratches and not specks on the skin of the fruit, an aesthetic defect that prevents their sale–, the damaged area is close to 1,500 hectares. “Taking into account that an average person works in each hectare, that means that there are at least 1,500 direct jobs affected”, estimates Rafael Hernández Reyes, president of COAG Canarias.

At least 40 million kilos are in danger, a third of the pretty island’s production

Around 6.5 million kilos came out of the plantations calcined by the laundry, approximately 4% of the total produced by La Palma in 2020 (149 million). These lands, according to Domingo Martín, president of Asprocan (the Association of Organizations of Banana Producers of the Canary Islands), “will disappear”, while those bathed in ash, if the volcanic activity ceases, “will be able to recover within a year ”.

“The physical damage caused by the ash is considerable. We expect that no less than 40 million kilos will have problems to be marketed, more than 30% of the island’s production. Added to this are the problems of irrigation and the blocking of crops due to the closure of the roads, which we still cannot evaluate, ”says Martín.

COAG estimates that, at least for the moment, 26 million kilos have been lost in the 400 hectares directly affected by the disaster, 17% of the island’s total production. Taking as a reference an average price of between 30 and 40 cents, the sector would stop billing this harvest between 7.8 and 10 million euros, although to this we would have to add the damage to the infrastructure of the farms. Asprocan, for its part, puts the losses at 72 million.

From the La Palma delegation of the Santa Cruz de Tenerife Chamber of Commerce, they maintain that as long as the volcano continues to spew magma, any attempt to quantify the economic impact of the eruption will be “hasty”, because the damage will continue to increase. “Problems with irrigation and complications for optimal maintenance of crops are beginning to add to the buried plantations. We are at the starting point of reconstruction,” they point out.

In the past, as happened after the 1949 eruption, the burned earth could have been removed, drained and plowed, but the current environmental legislation prohibits it, so Martín sees it very difficult that on this occasion the surface devastated by the tongue of fire can be recovered for agriculture. In his opinion, the urgent thing now is to save an area that has been isolated and is not receiving irrigation. The government has sent portable desalination plants to pump water to these crops.

Even if environmental regulations allowed the operations to be rebuilt, Hernández, from COAG, maintains that the investment would be so high that it could not be amortized at current market prices. Although the 8,000 Canarian banana trees and the 50 packaging companies are associated in six cooperative organizations, they have not achieved greater bargaining power vis-à-vis distributors and supermarkets, which raise and lower prices based on their commercial strategies. “That is doing us tremendous damage. For the small farmer, the price is given ”, he laments.

For this reason, the project approved by the Government in November 2020 to modify the food chain law put the sector on alert, since although the reform proposed that the price agreed between buyer and seller should at least cover production costs, It did not clarify whether these would be calculated on the total billing at the end of the year or on each operation.

Alicia Vanoostende, Minister of Agriculture of the Government of the Canary Islands, explains that the problem with leaving this ambiguity in the standard is that fruits and vegetables are perishable goods that are subject to peaks and falls in production that are very difficult to foresee, because they depend on a multitude of variables, including the weather. These ups and downs can cause mismatches between supply and demand. “Sometimes the farmer has to sell below cost so that his harvest is not lost and other times above, but at the end of the year this is compensated”, he says.

In this sense, Asprocan defends that the cost is calculated on the average price of the year and not on that of each individual transaction, an amendment to the law that Congress approved at the end of September, in full emergency. Parliament also clarified that European aid will be included in the calculation of costs. These are vital for the Canarian banana industry because, without them, its ultra-peripheral and insular condition would prevent it from competing with the banana.

386 million euros invoiced the banana of the Canary Islands in 2019, according to the latest statistics from the Ministry of Agriculture. Of this total, the sector sold 384 million in the domestic market and 1.7 million abroad.

375 million kilos Spain imported in 2020, worth 213 million euros, according to the Ministry of Foreign Trade. Costa Rica, Colombia and Ivory Coast were the main countries of origin.

96.5 million kilos of banana exported Spain in 2020, for an amount of 66 million euros, especially to Portugal (85 million kilos). But a large part of that volume is re-exports of bananas from other countries.

Bananas receive from Brussels about 141 million euros per year through the Posei (Program of Specific Options for Remoteness and Insularity). These funds risked a 3.9% cut this year due to the UK’s exit from the EU, but ultimately remained intact until 2027.

Normally, farmers receive the money in two parts, one half in December and the other in June, however, this year, in response to the situation, the Government of the Canary Islands, which manages the subsidy, will advance palm producers by 70 % of the amount in December.

Unlike other Spanish foods protected by designations of origin, the Canarian banana depends a lot on the national market. Of the 430 million kilos it produced in 2020, it barely exported 2.5 million, mainly from the organic category to Switzerland. Hernández points to a historical reason: until 1993, Spain could only consume Canarian bananas, while the rest of the EU was open to American bananas.

After liberalization, that inertia has been maintained. 60% of the banana consumed in the Spanish peninsula comes from the Canary Islands and the remaining 40% from other countries, especially from Costa Rica, Ivory Coast, Colombia and Ecuador. “The share of our rivals grows year after year. Even so, we have a consolidated market niche that we must not neglect ”, he says. “We have a limited production and our most mature market is Spain. It’s our choice ”, confirms Martin.

The Palmeña delegation of the Santa Cruz de Tenerife Chamber of Commerce blame the low internationalization of the Canarian banana the increased costs associated with its outermost location and the lower price at destination, as well as the conditions for the fruit to arrive in optimal quality conditions, taking into account its ripening process. “To this we must add that the European market has traditionally been dominated by the large banana operators,” they point out.

However, they highlight that in recent years, the Canarian banana has launched a strategy to be able to cross the borders of the peninsula, reaching markets such as Switzerland, France or Germany, where it has managed to position itself as a quality food, both in its conventional line as bio.

The banana industry of La Palma is waiting for the aid that will arrive for those affected by the eruption of the Cumbre Vieja volcano. The Government has approved a package of more than 213 million euros that includes 20.8 million in subsidies for the primary sector of the island, of which two million will go to guarantees and the rest will be transferred to the autonomous community to be take charge of managing it. This may allocate 14 million euros to agriculture and livestock and 500,000 to fishing.

While the funds arrive on the island, the Canarian Government processes an item of 10.5 million euros on account of the regional budget. Depending on the damage suffered by their exploitation, each producer will receive from this line an aid of up to 20,000 euros, indicates Alicia Vanoostende, the community’s Agriculture Councilor. “We expect these amounts to begin to be delivered in a month. We are going to prioritize the most affected area, the Aridane valley, ”he says.