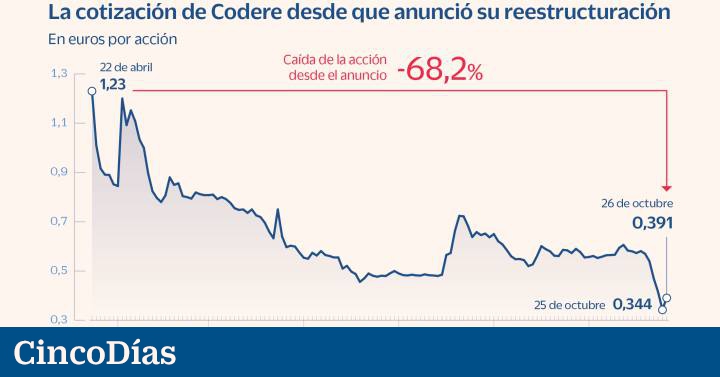 Codere It is heading into the last weeks of its complex restructuring process, which will give 95% of the ownership to its main creditors, the bondholders, and which will transfer its holding to a new Luxembourg company. Something that he hopes to finish before November 15 and that will lead to the withdrawal from listing of the Spanish Stock Exchange. However, the roadmap agreed between the company and its future owners sets a specific date to explore the return to the market: the end of 2023.

By then, just two years after they take control, the company’s board of directors will have to analyze the viability of the return to the Stock Market as a formula to give an exit to these investors, mainly opportunistic funds, as stated in one of the clauses incorporated in the extensive documentation that details the entire restructuring process.

It will have to do it before the end of 2023, and if the board gave its approval, the shareholders, that is, the bondholders, could approve it with a simple majority. This is the first option that the documentation indicates as a formula for the new owners of Codere to monetize their participation in the company, which by then will have its holding company located in Luxembourg. But it is not the only one.

From the moment they take control of the group, a simple majority of bondholders may also, at any time, initiate a divestment process, for example, with a sale to another financial or industrial investor. In this case, the board of directors will have the obligation to initiate a sales process, such as the preparation of the reports, their presentation to the interested parties, or the hiring of advisers, among others.

The current shareholders of Codere SA will not benefit from this future sale, whose weight in the group will be reduced to 5%, after the company rule out the distribution of warrants for them to participate in that operation, as was the initial idea.

In two years, Codere hopes to have recovered the income lost due to the pandemic and how hard it is to recover. In its last semi-annual financial report, it projected an income recovery that would be between 75% and 90% from pre-Covid levels at the end of 2021, to “slowly walk towards the full recovery between 2022 and 2023”. However, at the end of that first semester, their total income was at 37% of the level they had two years before. The reopening in all its markets and the better situation of the pandemic suggest a more accelerated recovery in the final stretch of the year.

During it, the group hopes to complete its restructuring. Once the formality of the request for consent to the bondholders has been completed, and with 129 million more in bonds prepared to be issued, Codere plans to close the process between November 5 and 15, as it explained yesterday in a statement, in which it had to clarify that the restructuring does not affect the normal performance of the group’s operations ”, after sinking 19% in the stock market on Monday.

Once completed, its board will convene a shareholders’ meeting, to be held before the end of November, to approve the dissolution of Codere SA and open the liquidation period.

The key point in the process is the liquidation of the current head of the group, Codere SA, since the holding will be transferred to a newly created Luxembourg company, of which the bondholders will have 95%. The remaining 5% will correspond to the current shareholders of Codere SA, which will be liquidated as part of the restructuring. At that time, those shareholders will be able to liquidate their securities in exchange for cash. However, the assessment of this amount will correspond to the settlement firm designated by Codere, after analyzing the company’s balance sheet and setting a settlement plan. Since the restructuring was announced, Codere shares have fallen 70%.