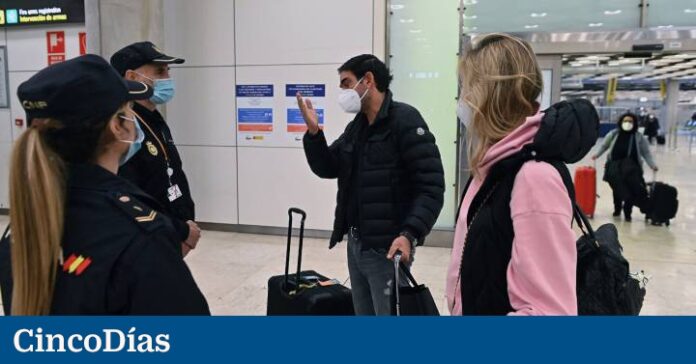 The 15 airports in the Aena network with the highest passenger traffic will soon have clinical spaces dedicated to performing diagnostic tests to detect Covid-19. At least that is what the company intends when launching a contest in which it looks for candidates to manage these areas in the departure terminals. They must face paying a rent.

The main scale for scoring the participants will be the price of the tests: those companies win make a bigger discount on a price level that will be updated every month.

Aena seeks to facilitate the movement of people who require evidence at origin to avoid quarantines at the point of destination. This would be facilitating the departure of Spaniards who need to travel abroad and, especially, the return of tourists to their countries.

In any case, PCR with a negative result will continue to be mandatory for those who want to enter Spain by air and come from countries classified as risky.

The possibility of accessing a test as cheap as possible, and very close to the boarding gate, it tries to alleviate the disincentive effect of the various mobility restriction measures adopted around the world to stop the pandemic. The airports chosen by Aena to implement the clinics are Madrid-Barajas, Barcelona-El Prat, Malaga-Costa del Sol, Alicante-Elche, Valencia, Seville, Bilbao, Palma de Mallorca, Ibiza, Menorca, Tenerife South, Gran Canaria, Fuerteventura , César Manrique-Lanzarote and La Palma.

The successful bidders will be able to perform diagnostic tests for active infection (PDIA) for SARS-CoV2. This includes the PCR test (RT-PCR of Covid-19, nasal and pharyngeal exudate); rapid antibody tests; rapid antigen detection tests or high-throughput serologies (Elisa, CLIA, Eclia), as well as clinical analyzes. Each of these diagnostic tests must comply with health regulations and be approved by the Ministry of Health.

The contest is open and the management of these spaces will be private. The contracts will have a duration of six months, extendable for an identical period. Aena has already turned to private medical companies for the health control of travelers from abroad. In that case, the service is being provided by Quirón and Interserve, which complement the Foreign Health personnel.

The airport manager has stated in the bidding documents that, in the event of detecting positive results for Covid-19, in each of the airports the health alert protocols already established will be activated and action will be taken in coordination with the health authorities of each autonomous community.

Among the obligations of these clinics that will be temporarily enabled is the availability of a telephone number and a website to facilitate test reservations. Before conducting the tests, the time traveler must also be informed to obtain the result.

At first, passengers who need the test at the destination airport will have priority, and in no case has this solution been thought of for those who must bring the negative test from origin. The aim is to avoid, in this way, the disembarkation in Spain of people infected by the virus, who should be detected at their starting points and not get on a plane.

Nor have these clinics been thought of as a solution open to the public on the street. And is that Only those with a boarding pass will be able to access them.

The tender has been divided into four lots. In the center-south are Madrid-Barajas, Malaga-Costa del Sol and Seville. The northeast lot is made up of Barcelona-El Prat, Alicante-Elche, Valencia and Bilbao. The three airports in the Balearic Islands, Palma de Mallorca, Ibiza and Menorca, make up the third group. And, finally, you will be able to choose a fourth lot made up of the Canary Islands Tenerife South, Gran Canaria, Fuerteventura, Lanzarote and La Palma. Interested companies can bid for one, several or all lots.

The decision to carry out tests in the terminals has already been made at the airport of Dublin or in the Londoners of Heathrow y Luton, the latter managed by Aena itself. Lufthansa has also developed this type of expertise in German airports, coming to bear the costs of the tests.

In Spain, the airline industry is clamoring for the validation of the antigen test, instead of the PCR, to enter the country. The aim is to reduce the costs that the traveler must bear.

The structure of the clinics. The new spaces for conducting diagnostic tests must have an area for conducting the tests, preserving the privacy of the traveler, and areas for both waiting and isolation.

Economic prices. The specifications of this tender seek to guarantee that the price of the tests are competitive and adequate. In no case may they be abusive or be above the price of identical tests in reference establishments.

Proven experience. Candidates to enter airports must prove experience in conducting clinical tests at least in the last two years. They must also have authorization from Health to import, buy, distribute and sell medical supplies.

Backup facilities. Another requirement is to have an authorized clinical analysis laboratory and qualified personnel to carry out the tests and prepare the reports. The capacity of these laboratories must be a minimum of 128 daily tests and the maximum time to issue the results will not exceed 12 hours.