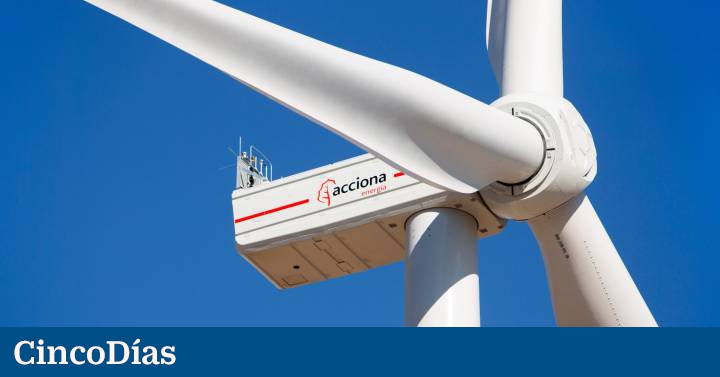 From hell to heaven of the Stock Exchange. Acciona Energy has gone from the historic low marked last February to a record. In this time, it has recovered 60.5% of its value and has positioned itself as the second most profitable company in 2022 on the Ibex with a profit for its shareholders of almost 30%. This achievement coincides with the first year of its IPO.

In the first place, the company has taken advantage of the redoubled commitment to renewables after the outbreak of the war in Ukraine and the EU’s decision to reduce its energy dependence on Russia. The latest growth spurt has been accompanied by the results of the first semester, which reflected an increase of 155.5% in profit (up to 390 million), and which surprised analysts favorably. “The numbers far exceeded expectations due to high prices [de la energía]in Spain, a market that accumulated more than 70% of the Ebitda, after almost quadrupling its contribution to 676 million euros”, comments Guillermo Barrio, of Intermoney Valores.

The recent signing with Fortia – the energy management platform for large industrial consumers – of the largest renewable corporate PPA (long-term purchase and sale of energy) with physical delivery for industry signed in Spain has also been a catalyst.

Acciona’s renewables subsidiary has shown strength even in the face of the Government’s decision to tax 1.2% on energy companies with more than 1,000 million revenues for two years. Goldman Sachs places Endesa and Naturgy as the most affected, since they would account for 15% and 12% of the 2022 turnover, and Acciona Energy, as the least affected, with 3% of sales.

In this regard, José María Entrecanales, president of Acciona, has stated that “it would be fair for renewables to be exempted in view of a profitability that has been historically low, especially after the regulatory reform of 2012, and given the need to encourage investment in the ecological transition.

Acciona Energía continues to be a firm bet for the market: it has 74% buy recommendations, and the rest hold. But it is trading above the average market consensus target of 40.94 euros. Société Générale, Alantra and Goldman Sachs have just lowered the board to neutral.

Goldman Sachs has been the last to relax its optimism about the company and argues for “the solid evolution of the shares.” “The value responds well to our vision of the sector, and we have improved Ebitda by 8% for 2022, but we consider that the success (and profitability) of the additional capacity to 2035 is being quoted,” adds the bank, which has set a target for the titles of 43.50 euros at 12 months, with hardly any potential for an increase.

Citi highlights, on the other hand, “the good positioning of renewables to achieve a record year”, although it recognizes that “profitability will normalize as energy prices decrease”. “Global footprint and technology diversification should allow it to capture the opportunities of decades of renewable growth, while lowering the risk profile.” Likewise, he highlights that its leverage is lower than that of its competitors, which reduces exposure to the increase in interest rates”.

Guillermo Barrio is committed to value due to his “excellent track record in the development of new capacity; its successful concentration of growth in a limited number of stable markets, and its adequate financial situation”. Looking to the long term, the expert points out “the moderation of prices in Spain, between 60 euros/MWh and 65 euros/MWh for 2026 and 2027, compared to a forecast in 2022 of 156 euros/MWh”. This decrease would be “more than compensated” by the growth capacity of other markets.

Quotation. Acciona Energía joined the Ibex 35 last June. One year after its IPO, it has made the leap to the index of large companies, even surpassing the capitalization of its parent company, which is 10,800 million euros compared to 13,800 for renewables. Trading has grown remarkably; If in 2021 23.58 million shares were exchanged from the IPO on July 1 to the end of the year, in 2022 31.40 million have already been moved. It is one of the few positive stock market debuts in the last decade (57%).

Rating. Fitch has just maintained the long-term rating at BBB- (investment grade). The agency argues that the decision reflects the solid profile of the business, geographically diversified and with a good forecast of income from long-term contracted and incentivized production. It also highlights its “ambitious growth plan”, where it plans to almost double its capacity by 2025 to 20 GW.

remuneration. It distributed its first dividend in April, of 0.28 euros per share; 25% of the benefit of 2021. The profitability reaches 1%.