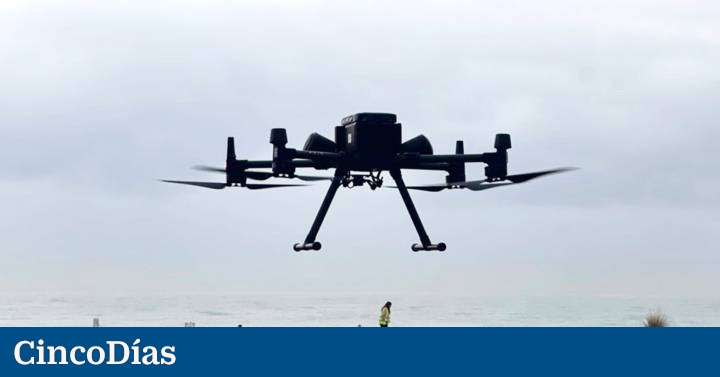 Spain accelerates its logistics future from the sky. Enaire, the Spanish air navigation manager, completed a test with 200 drone flights simulating logistical transport and parcel delivery operations, bringing the Peninsula closer to the dream of the European Union: that in 2035 drones are used regularly for package delivery.

For these tests, the first to be carried out in Europe, the Castelldefelds beach setting in Barcelona was chosen. Along three kilometers of beach, the drones came and went to four landing and take-off points (vertiports), simulating continuous deliveries at 11 delivery points that were set up in the sand. Up to eight drones from four different operators belonging to the UPC, the UAB, the Hemay Foundation and Mars Intelligence were flown, completing almost 30 routes in a single day.

The simulations allowed Enaire to test the U-Space system on a large scale, developed in collaboration with Aslogic and Indra, to establish the safe air corridor for drones that the EU plans to have operational in twenty countries by 2025.

“The U-Space platform will allow the automated and digitized integration of drone aviation with manned aviation,” explained Victoria González, Enaire’s ATM operations technician, in a statement.

On the last day of testing, interspersed flights were simulated with a Castelldefels Local Police drone to test viability in flight contexts near restricted areas –geofences–, a way of checking the integration of the U-Space system in emergency situations.

The trial is part of the European project Corus-XUAM, led by Eurocontrol and in which Enaire participates, under the umbrella of the Horizon 2020 program, financed with European funds. “This project tries to define the services and solutions so that urban air mobility (UAM) operations are efficient, safe and complementary to the current transport system, making it much more sustainable and allowing the transport of parcels and passengers,” he explained. his part Giancarlo Ferrara, responsible for Eurocontrol.

Some 30 organizations have been involved in the project to carry out large-scale drone demonstrations across Europe and thus promote U-Space services and solutions for technological, industrial and commercial development of unmanned aircraft and operations management. of flight integrated in the scope of the UAM.

After the tests in Spain, those in Italy, Belgium, and France will arrive before the summer, and later the U-Space systems will be tested in Germany, the United Kingdom, and Sweden.

The implementation of the new system is expected to be ready in Spain in 2022, prior to the entry into force of the European U-Space Regulation next year.

Between January and March, more than 2,250 drone operations have been managed in the airspace controlled by Enaire with an average of 123 flights per day. The figure reflects the boom in the use of drones in the last three years: in 2021, 6,101 drone operations were carried out in Spanish airspace, 5,546 in controlled airspace, 370% more than in 2020 and far from the 536 of 2019.

By autonomous communities, the regions that registered the most operations are Catalonia (283 flights), the Canary Islands (200) and Madrid (161).