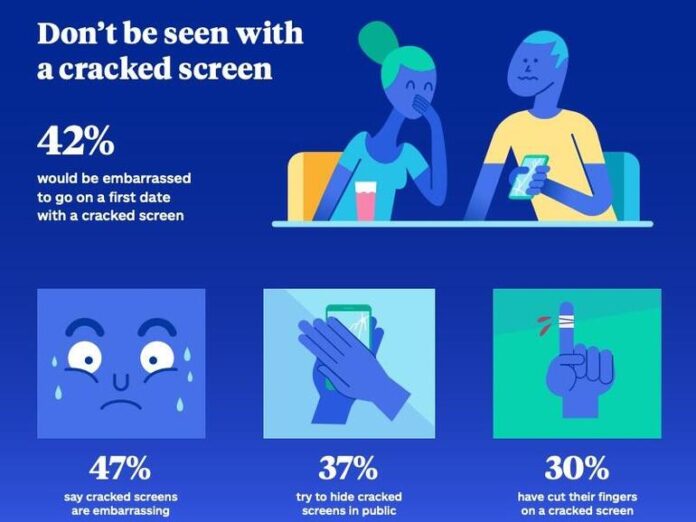 Survey also finds that 63% of people avoid repairs because of the cost and 30% have cut their fingers on broken screens.

A new study finds that smartphone owners in the US often underestimate how often repairs are needed and how much those repairs will cost. A survey by Allstate Protection Plans found that 87 million Americans have had a smartphone mishap in the last year, with the most common problem being a cracked screen.

The Mobile Mythconceptions Study looked at the common causes of smartphone damage and attitudes about replacements and repairs.

Survey respondents estimated that only 43% of smartphone owners have had an accident that required repair. The actual number was 61%, according to the survey.

Forty-seven percent of respondents said they would be embarrassed by a phone with a cracked screen and 49% saying a phone with this problem looks unprofessional.

Sixty-three percent of the people surveyed have avoided fixing a broken smartphone because of  repair costs. Almost the same amount–64%–said they would upgrade to solve the cracked screen problem rather than fix the phone.

This seems to lead to ultimately putting the broken phone in a drawer, according to the survey. More than half of the respondents said they know how to recycle an old smartphone, but only 21% actually take the time to do so, with 68% of people admitting they have an old phone in their house.

In addition to managing repairs, SquareTrade, an AllState company, also tests phones for reliability. In a blog post about the reliability of the iPhone 11 series, Jason Siciliano, vice president and global creative director at SquareTrade, said the iPhone 11 Pro was the most durable iPhone the company has tested in generations.

The Allstate Protection Plans 2020 Mobile Repair Study was conducted online in August 2020 among a sample of 1,009 American adults.

“It’s the first smartphone to survive our tumble test, which simulates the effects of multiple, random impacts experienced by a smartphone during long-term use,” he said in the blog post.

The company tests a variety of physical factors in the breakability tests, including bending, dunking, repairability, and face-down as well as back-down drop tests.

The company tested the iPhone 12 also and reports that it is the most durable smartphone they have ever tested. Drop tests provided that the ceramic shield screen is “a leap forward for durability, though not indestructible.”

There are options for fixing your phone, even when Apple stores are shut down and other repair shops may have limited hours. Jason Cipriani on CNET explains the options for the DIY approach or shipping your phone into the manufacturer.

The pandemic also has influenced smartphone sales. Smartphone sales were down 5.7% in Q3 of this year, which was an improvement over the 20% drop in Q2 according to Gartner. People bought 366 million smartphones in the third quarter. Sales improved slightly over Q2.

Even new 5G smartphones and an easing of quarantine restrictions could not boost sales, according to Gartner.

5G networks and devices, mobile security, remote support, and the latest about phones, tablets, and apps are some of the topics we’ll cover.
Delivered Tuesdays and Fridays