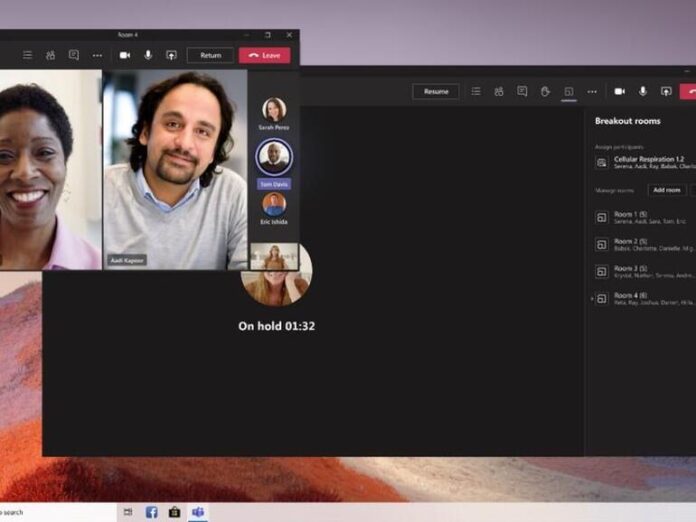 has introduced breakout rooms and announced that Together Mode is now available on the web version of the virtual meeting platform, along with some new festive-themed backdrops.

Breakout rooms allows meeting organizers to split meeting participants into smaller groups and send them into their own closed meeting spaces for discussions or group work, before recalling them back into the main meeting at the end of the session.

Up to 50 breakout rooms can be created by an organizer, who can choose to either manually assign people to individual rooms or have it done automatically by Teams. The organizer can join each breakout room, send announcements to each group and rename or reassign rooms throughout the meeting. Participants can join a breakout room from desktop, web or mobile.

Microsoft hopes that breakout rooms will prove popular with the virtual office parties that will be taking place this year in place of traditional Christmas get-togethers and end-of-year mixers. The company
announced breakout rooms

at its virtual Ignite conference in September, alongside a long list of other updates and improvements that it plans to introduce to Teams throughout the remainder of 2021 and into next year.

Rival platforms, including Zoom and some Google Meet licenses, also have a breakout rooms feature.

Also new on Teams – for the web version of the app, at least – is
Together mode.

Together mode has been available on the desktop version of Microsoft Teams for a few months, but compatibility has now been expanded for those who access Teams via their web browser.

In non-technical terms, Together mode slices up individual participants’ video feeds and then puts them into a shared space – such as a lecture hall or coffee shop – so that meeting participants can experience the feeling of being in the same room as their colleagues, classmates or family members.

Together mode is now available in preview for Teams web users, along with a large gallery mode that enables users to view the video feeds of 49 other participants in the same windows (50 in total). In keeping with the festive season, Microsoft has released a new set of “winter wonderland” backgrounds for Together mode, including a bauble-adorned snow-scape and snow fort.

“We hope these new experiences and tips bring joy to your workplace and make meetings and office parties more festive this holiday season,” Microsoft said.