A flying car that tackles climate change, a speedboat that travels to space, and a watch that can alert emergency services depending on its wearer’s movements are just some of the ways children have predicted technology will shape our future in a new competition launched by Revolent.

Primary school pupils in the UK and Australia were asked to draw their own vision of how tech could change the world, with shortlisted entries also seeing their creations mocked up by a professional 3D designer, bringing their inventions to life. From that shortlist, Revolent’s President Nabila Salem then selected a winner from each country, who received Amazon vouchers as their prize.

The final entries found that automation was the favoured theme amongst children, with over a third of drawings reflecting ways that tech could assist with everyday tasks. As industries around the world look to AI, machine learning and robotics to help automate functions that allow businesses to grow and be more productive, it appears that the next generation have already seen its potential and adopted it as part of their own vision of the future.

Teleportation was the next most popular subject, closely followed by the environment. “I think it’s really amazing that even at a young age, children are seeing that tech can make a positive impact on the planet,” added Salem. “It’s sobering that the climate plays such a big part of their world view already, but also encouraging that their minds are focused on ways to tackle it.” 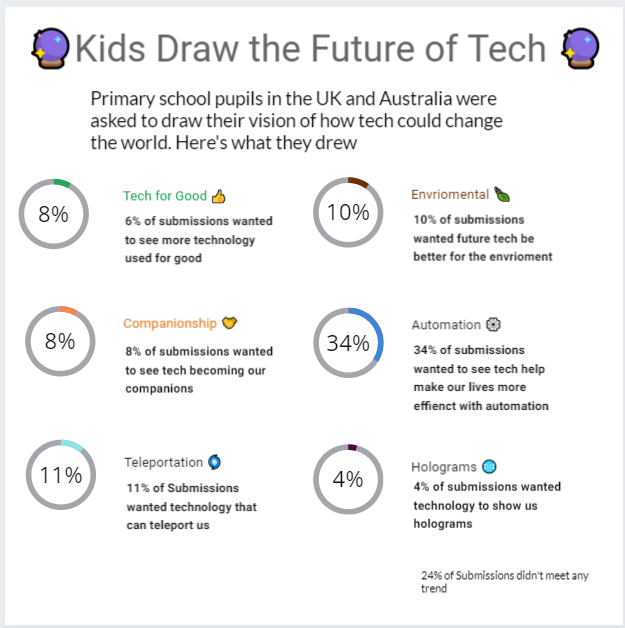 In the UK, eight-year-old Cup won for his invention of a mobile phone that monitors your health, with its headline feature being robot arms that dial emergency services if they detect no movement in the wearer. “How many lives could that save?” asked Nabila when announcing the winners. “How many people just don’t get to the phone quick enough? I feel like that would make a significant impact on the world we live in.”

Third grader Liam edged the Australian entries, for his solar-powered flying car that tackles climate change. “In order for us all to thrive in future, we need to focus on sustainability,” added Salem. “Not only would this be a huge technological advancement if it happened, but the fact that it also tackles climate change is fantastic.”

“I think both these entries were hugely innovative, creative, and most importantly they look at sustainability. A lot of people fear technology, but this just shows that if we work with it, it has phenomenal potential to help individuals and for the world itself.”

Looking to the future 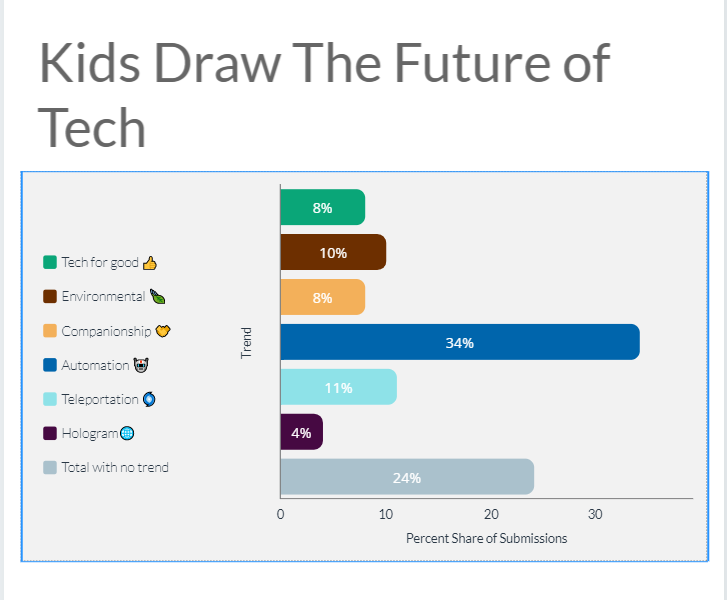 Many surveys have highlighted the importance of teaching digital skills to children in order to enhance their career prospects, but education still lags behind in supporting them with the relevant know-how. While tech remains a creative industry for many, it’s underlined by hard skills that help to make dreams a reality for organizations around the world.

With children already imagining digital solutions throughout the competition, it’s clear the creativity needed to succeed in digital careers is there—the onus is now on the parents and educators of the world to equip them with the skillsets needed to make a difference in the future.

For instance, as tech has become more and more open source, coding has emerged as a very basic skill that could help a child seeking a digital career. Similarly, with the cloud continuing its rapid growth, having a basic understanding of what the cloud is will also be incredibly useful. That doesn’t have to be complex knowledge of the concept, but just thinking about where this data exists, how it’s stored and why it’s important to be secured.

For parents, simply facilitating a child’s interest in tech can already help foster a lifelong passion. Whether that’s listening to their conversations when they talk about their digital aspirations, or even allowing them to get involved with organizations such as Coder Dojo, who will help equip them with the tech skills they need to succeed.

Behind all of this, of course, lie role models who will inspire children of all backgrounds that this is an industry that will welcome, and elevate, them. Whether that’s YouTubers talking about the digital solutions they’ve come up with, to highlighting those in the industry that young people may wish to emulate, and allowing their stories to be heard.

There’s no getting away from the fact that tech has become a part of our children’s present, as well as their future. Their world will be shaped, and potentially saved, by digital innovation. That means finding and highlighting those that will inspire them to be a part of it, and also encouraging them through offering our own support on their journey through digital revolution.