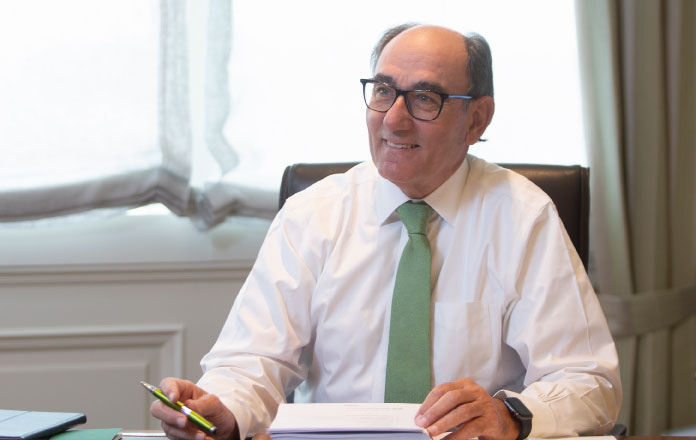 Ignacio Galán, Chairman of Iberdrola: “The current crisis demonstrates the need to accelerate the energy transition to achieve energy self-sufficiency in Europe and decarbonize our economy. To achieve this, solutions based on the European framework and a continuous dialogue between market players and administrations are needed”

Growth driven by investment in renewables and grids, and the international build-up

o The company already has 1,258 MW in operation and expects an additional 7,200 MW by 2027, of which 2,600 MW are under    construction.
o Planning consent received for the 2,900-MW East Anglia Hub in the United Kingdom.
o A power purchase agreement for the Commonwealth Wind farm was signed in the United States, which will involve an investment of €4 billion.

A short and long-term resilient model

Iberdrola continues to pursue its strategy, committed to clean energy in order to accelerate the energy transition and the planet’s decarbonization. To this end, the company has invested almost €10 billion over the past 12 months. With more than €2.1 billion invested in the first quarter of the year, with over 90% allocated to smart grids and renewables.

Thanks to investments and the international contribution, net profit grew to €1.05 billion in the first quarter of 2022, up by 3% compared to the same period in 2021. The growth in the international business – 33% in Avangrid and 20% in Neoenergia – offset the adverse result of Iberdrola Spain, which recorded a 29% drop in net profit, to €337 million, due to high energy prices which were not passed on to its customers who has acquire energy at previously agreed fixed prices. With this decline, Spain now accounts for less than a third of the group’s total profit. 80% of the energy sold to Iberdrola’s liberalised market customers is at prices that are between one-half and one-third lower than the regulated tariff prices.

Gross operating profit (Ebitda) increased by 5% in the first quarter of 2022, to €2.95 billion, thanks to the good performance of the United States, Brazil and the international area.

By business, the networks area grew by 20% to €1.58 billion, while the energy production and supply business fell by 6.8%, to €1.36 billion, mainly affected by high energy prices, low renewable production and the unscheduled shutdown of the Cofrentes nuclear plant – now resolved -, which forced the purchase of almost 4.5 TWh in the market.

Ignacio Galán, Chairman of Iberdrola highlighted that “the current crisis demonstrates the need to accelerate the energy transition to achieve energy self-sufficiency in Europe and decarbonize our economy. To achieve this, solutions based on the European framework and a continuous dialogue between market players and administrations are needed.”

Greater commitment to renewables and countries engaged with decarbonization

The company has allocated more than €1.12 billion of its first-quarter capital expenditure to renewables. This investment drive has enabled the group to install 3,500 MW new clean capacity in the last 12 months – 1,218 solar PV, 1,136 MW onshore wind, 998 MW hydroelectric and 111 MW of batteries – and to reach 38,300 MW of renewable capacity worldwide.

The company currently has 7,500 MW under construction and a project pipeline totaling 90,000 MW. By country, the company has accelerated development in regions with greater climate ambition and more stable regulatory frameworks, such as the United States – with more than 22,100 MW in the pipeline –, the United Kingdom – 15,400 MW – and other international geographic areas – with 24,800 MW – including countries such as Sweden, Germany, Australia, Poland and Japan.

One of the group’s main growth platforms is the development of offshore wind projects, where it already has 1,258 MW in operation. During the first quarter, the company reached important milestones in offshore wind, such as the planning consent for the 2,900-MW East Anglia Hub in the United Kingdom and the power purchase agreement for the Commonwealth Wind farm (1,232 MW) in Massachusetts, United States, which will involve an investment of €4 billion. Thanks to the new projects, the company will have 7,200 MW of offshore wind power in operation by 2027, of which 2,600 MW are already under construction.

Within the networks business, Iberdrola has invested almost €800 million, in line with the group’s strategy to increase and reinforce a key infrastructure for the energy transition and the electrification of the economy. The United States and Brazil together contributed 64% of the investment while Spain and the United Kingdom accounted for the remaining 36%. One of the key milestones this quarter was the provisional approval by the British electricity market regulator (Ofgem) for the construction of the 2 gigawatt (GW) power transmission line linking Scotland and the northeast of England, which is expected to come into service in 2027.

As part of this investment effort, Iberdrola made purchases from suppliers totaling €12 billion in the last twelve months, which allows it to employ 400,000 people across its

Iberdrola continued to improve its financial strength in the first quarter thanks to the generation of operating cash flow, which grew by 32% to €3 billion.

During the first part of the year, the group once again reaffirmed its leadership in green financing, with €41 billion outstanding under green (€17.9 billion) or sustainable (23.4 billion) formats. In fact, during the first quarter of 2022, Iberdrola reopened the fixed-income Euromarket with a €1 billion green bond issue with a 10-year maturity. This operation allowed it to reinforce its already comfortable liquidity position, closing a large part of the 2022 financing at excellent conditions while reducing market risk due to the evolution of interest rates and credit margins.

The group’s liquidity currently exceeds €21 billion, covering its financing needs for 22 months. In an inflationary context, the company has 80% of its debt financed at fixed rates.

During the results presentation, the Chairman of Iberdrola highlighted the company’s resilient business model in the short and medium term: it is highly diversified – 70% of gross margin comes from the international area –, it has a solid financial structure – 80% of debt is fixed-rate and long-term – and procurement with closed or assured prices for 2022, thus avoiding the current commodity tensions.

Despite the regulatory uncertainty in Spain, Galán reaffirmed profit growth forecast for 2022, thanks to five main factors: the more than 3,800 MW of additional installed capacity planned for this year; the €4 billion investment in networks that will contribute to this year’s result; additional growth in the United States and Brazil due to investments; the positive impact of foreign exchange and improved margins of the retail business in the United Kingdom. With these elements, Iberdrola expects to post net profit of between €4 billion and €4.2 billion, which will allow a dividend distribution for 2022 in line with the same, setting a floor of €0.44 per share.

The Board of Directors will propose to the Shareholders’ Meeting the approval of a final dividend distribution for 2021 of €0.27 per share, in addition to the €0.17 euros per share paid as interim dividend in February.

This communication includes certain Alternative Performance Measures (“MARs”), as defined in the Guidelines on Alternative Performance Measures published by the European Securities and Markets Authority on October 5, 2015 (ESMA/2015/1415en). MARs are measures of financial performance prepared from the financial information of Iberdrola, S.A. and its group companies but which are not defined or detailed in the applicable financial reporting framework. These MARs are used with the objective of contributing to a better understanding of the financial performance of Iberdrola, S.A. but should only be considered as additional information and in no case replace the financial information prepared in accordance with IFRS. Furthermore, the way in which Iberdrola, S.A. defines and calculates these MARs may differ from that of other entities that use similar measures and, therefore, they may not be comparable with each other. Finally, it should be noted that some of the MARs used in this communication have not been audited. For further information on these issues, including their definition or the reconciliation between the corresponding management indicators and the consolidated financial information prepared in accordance with IFRS, please refer to the information available on the corporate website (https://www.iberdrola.com).

This communication contains forward-looking information and statements about IBERDROLA, S.A. and AVANGRID, Inc. Such statements include financial projections and estimates and their underlying assumptions, statements regarding plans, objectives, and expectations with respect to future operations, investments, synergies, products and services, and statements regarding future results. Forward-looking statements are not historical facts and are generally identified by the use of terms such as “expects,” “anticipates,” “believes,” “intends,” “estimates” and similar expressions.

In this regard, while IBERDROLA, S.A. believes that the expectations contained in such statements are reasonable, investors and holders of IBERDROLA, S.A. and AVANGRID, Inc. shares are cautioned that forward-looking information and statements are subject to risks and uncertainties, many of which are difficult to predict and are generally beyond the control of IBERDROLA, S.A. and AVANGRID, Inc, risks that could cause actual results and developments to differ materially from those expressed, implied or projected in the forward-looking information and statements. Such risks and uncertainties include those identified in public documents filed by IBERDROLA, S.A. with the Comisión Nacional del Mercado de Valores and by AVANGRID, Inc. with the Securities and Exchange Commission that are available to the public.