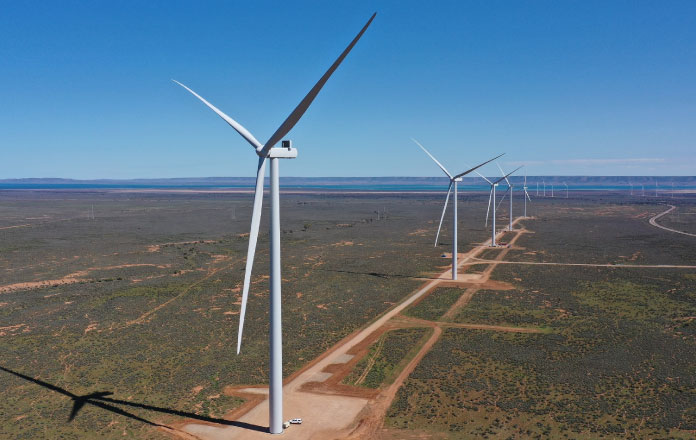 The renewable energy supply arrangement is in place until 31 December 2030. The arrangement comprises a retail electricity supply contract with the supply of renewable energy certificates to come from Iberdrola Australia’s newly constructed Port Augusta Renewable Energy Park, the largest hybrid wind-solar plant in the southern hemisphere. The 320MW facility comprises 50 wind turbines and 250,000 solar panels and will generate a total of approximately 0.9TWh per year of renewable electricity. The project has created 200 full time jobs during its construction phase and will create 20 permanent full-time roles in regional South Australia throughout its operational life.

Woolworths Group is Australia’s largest retailer, representing around one per cent of the country’s total energy use. In line with the milestone announced for the retailer’s South Australian operations today, over the next three years Woolworths Group will gradually replace traditional energy contracts in other states with green agreements. These practical steps form part of Woolworths Group’s commitment to become 100% powered by renewable energy by 2025.

“South Australia has long been a world leader in renewable energy, paving the way for more businesses to switch to clean energy.

“This is the way the world is moving. Private capital is now leading the charge in backing clean energy, which presents a big opportunity for South Australian jobs. Which is why the State Labor Government is working to ensure we maintain our position as a national leader on renewable energy.

“I congratulate Woolworths Group on this exciting initiative.”

“South Australia will be the first state where every one of our sites are powered by green energy, and we’re excited to use renewable energy generated locally to reduce the footprint of our stores from Roxby Downs to Renmark.

“South Australia has helped lead the transition to renewable energy in Australia, combining solar, wind and batteries to enable us to make this leap forward in our mission to be powered entirely by renewable sources by 2025.

“Our customers want us to make shopping better for the planet, and renewable energy is just one of the ways we’re boosting sustainability – along with reducing plastic and increasing recycling – with the support of our sustainability innovation business Woolworths360.

“We’re proud to be making tangible changes today that will create a better tomorrow for generations to come and we look forward to building on this in other states over the next three years.”

“We are delighted to be supporting Woolworths Group in their sustainability journey by providing their retail stores in South Australia with 100% green energy. Woolworths is demonstrating that together we can decarbonise our electricity sector, preserve our natural environment and create jobs in Australia’s regional communities.

“The Port Augusta Renewable Energy Park is the largest hybrid wind-solar farm in the southern hemisphere. It operates alongside Iberdrola Australia’s large and rapidly growing fleet of wind, solar, battery and peaking generators, enabling us to provide our customers with electricity supply arrangements that are at once reliable, affordable and clean.”

Iberdrola Australia is leading Australia’s transition to a clean future, today. Our strategy is to put customers at the centre of the renewable energy transition by providing them with firm supplies of clean energy at affordable prices. We partner with our customers to help them deliver their sustainability and renewable energy goals. At Iberdrola Australia we operate one of the largest portfolios of renewable energy assets in the country and we have invested in a fleet of flexible, fast-start firming assets that manage intermittency risks. We also offer behind the meter solutions such as rooftop solar, battery storage and microgrids, enabling our commercial and industrial customers to have more control over their energy costs. Iberdrola Australia’s customers include retailers, manufacturers, universities, councils, food and beverage producers, electric vehicle manufacturers, commercial property operators, industrial utilities, timber processors and large-scale infrastructure asset owners. More information on our customer offerings is available at: www.iberdrola.com.au

Woolworths Group is a food and everyday needs retailer united by the shared purpose of creating better experiences together for a better tomorrow. With more than 1,400 stores across its Woolworths Supermarkets, Countdown Supermarkets (New Zealand) and BIG W brands, B2B business serving wholesale and export markets, and a range of fast-growing eCommerce businesses, Woolworths Group is Australia and New Zealand’s largest retailer. A top 20 company on the Australian Securities Exchange (ASX), Woolworths Group employs more than 180,000 team members and serves more than 20 million customers a week.

Holiday hack: How you can double your Paid Time Off