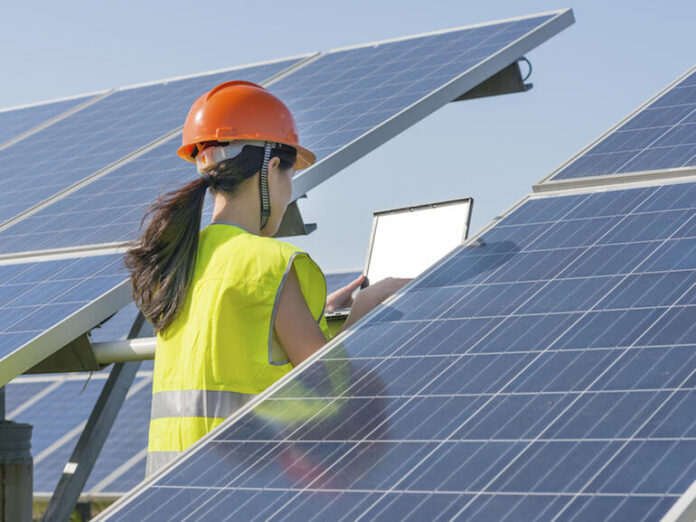 Researchers have developed a health tracker for solar panels to make it easier to measure performance out in the field instead of just in the lab.

Alexander Killam, an electrical engineering doctoral student and graduate research associate at Arizona State University, came up with the measurement technique. Killam is the lead author of “Monitoring of Photovoltaic System Performance Using Outdoor Suns-Voc,” a paper about the new measurement tool published in the journal Joule.

The Suns-Voc measurement records a solar panel’s voltage as a function of light intensity in an outdoor setting. Solar cells are tested in the lab with this measurement before being installed but often aren’t tested again. Killiam has adapted this measurement to outdoor use by using temperature sensors and on-site weather stations to account for current weather conditions.

Stuart Bowden, an associate research professor who heads the silicon section of ASU’s Solar Power Laboratory, said that the advantage of this new method is that it creates a new data stream. Understanding how solar panels degrade over time and in different environments will help the industry extend the lifespan of the panels beyond 25 years, he said.

“This is a cost-effective way of collecting that data and one the industry is already familiar with,” he said.

When panels are tested after installation, the system has to be shut down. The Suns-Voc method allows operators to do remote monitoring, another improvement over the current methods. Traditional measurement tools also don’t show change over time.

“You know how much power a panel is producing but you don’t know if the panels are producing less power than last year,” Bowden said.

Killam said that another advantage to his new measurement method is that installers can track the performance of panels even during cloudy periods.

“You’ll have less power production in cloudy years but you don’t know if it’s because of less light or degradation,” he said. “With this method you can normalize to a particular set of conditions to take measurements in different temperatures or light levels.”

Bowden said that the Suns-Voc method measures the voltage of a cell when it is not under a full operating load. This means solar panel operators can take two measurements a day—one at sunrise and one at sunset.

The paper published on Dec. 4 and Killam said that he has already heard from operators at a power plant in Europe who want to use his method to understand why panels are losing performance.

“This technique is easily adopted for existing power plants and it is even easier if this is added to preliminary designs,” he said.

Also, this method can be used to track the health of an individual panel or an array of 20 up to 100 modules.

“We can get whatever resolution we would like for a particular use case,” he said.

The ASU lab develops new technology for the solar industry. In a conversation with the ASU communications department, Bowden said that if Bill Gates’ smart city which is planned to be built 30 miles west of  Phoenix, decided to use the team’s measurement technology, it could become the IoT of solar panels.

According to the Solar Energy Industries Association, residential installations of solar panels dropped 23% from Q1 of this year to Q2. Non-residential installations were down 12% from the previous quarter. On the bright side, solar made up 37% of all new electricity generating capacity in the US in the first half of this year. That figure is similar to the amount of new capacity added in 2019. Also, more than 70% of the quarterly capacity came from utility companies which is a Q2 record.

Many homeowners get a loan to cover the installation of solar panels. The Federal Housing Administration has a program to help homeowners cover this cost and many solar panel installers also offer loans. Bowden said that this new measurement capacity adds more predictability to the long-term capacity of solar panels, which could make it easier to finance these installations.