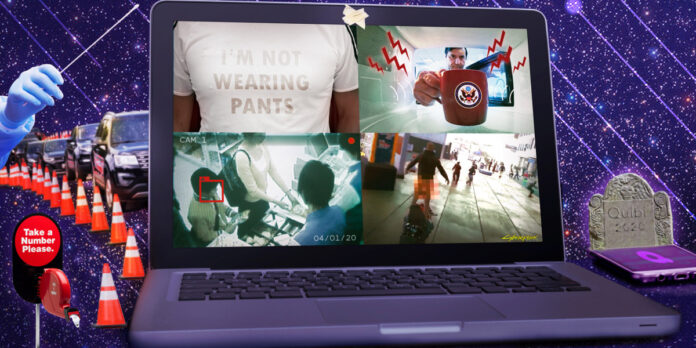 This was a year we needed technology to save us. A pandemic raced over the land, there were wildfires, uneasy political divisions, and we gasped in the miasma of social media. In 2020, the ways in which technology can help or hurt never seemed clearer.

In the success column we have covid-19 vaccines. But this article is not about successes. Instead, this is our annual list of the worst technology flops and failures. Our tally for 2020 includes billion-dollar digital business plans that faceplanted, covid tests that bombed, and the unforeseen consequences of wrapping the planet in cheap satellites.

The polymerase chain reaction is not a new technology. In fact, this technique for detecting the presence of specific genes was invented in 1980, and its inventor won a Nobel Prize a decade later. It’s employed in a vast array of diagnostic tests and laboratory research.

So it counts as a historic screw-up that at the beginning of the covid-19 pandemic, the specialized laboratories of the US Centers for Disease Control and Prevention sent states lab kits with wrong ingredients that didn’t work. So began the failure to stop the pathogen, the sidelining of nation’s top public health agency, and, more broadly, the unexpected inability of the country that invented PCR to get coronavirus tests to everyone who needs one. Widespread and frequent testing is what economists said would be the swiftest, cheapest way to keep the country up and running. Even now, 11 months later, lines and delays are still the testing norm in the US, even as private labs, universities, and health centers run approximately two million tests per day.

Stop covid or save the economy? We can do both, MIT Technology Review

The CDC’s failed race against covid-19: A threat underestimated and a test overcomplicated, Washington Post

Imagine a grainy video from a convenience store robbery. A shoplifter looks at the camera and presto, police use face recognition to identify a suspect. Now imagine a city—like Portland, Oregon—that decides it has to ban police from doing that.

The ability to match faces is one of the signal triumphs of the new generation of artificial intelligence, and the technique is appearing everywhere. That includes settings where its use can seem intrusive or unfair, like schools or public housing. The result this year: a run of bans and restrictions by cities, states, and companies that could stifle one of the first and most significant results of superhuman AI.

The reason the technology is accelerating is that cameras are everywhere—and we all handed over our selfies. “We have allowed the beast out of the bag by feeding it billions of faces, and helping it by tagging ourselves,” says Joseph Atick, who built an early face recognition system using special cameras and a custom image database. Now there are hundreds of face recognition programs crunching pictures online. Controlling these systems, says Atick, “is no longer a technological issue.”

Over the summer, Microsoft and Amazon both denied police access to their face-matching systems, at least temporarily, and cities like Portland enacted sweeping bans that also stop hotels and shops from identifying people. What’s still missing is a national framework to guide right and wrong uses.  Instead of a cycle of abuses and bans, we need policy. And in the US, we don’t have it yet.

Listen to more: Attention, Shoppers: You’re Being Tracked, In Machines We Trust podcast

“Quick bites. Big stories.” That was the motto of Quibi, a Hollywood-powered streaming service that set out in April to revolutionize entertainment with 10-minute shows for phone screens.

But the big story ended up being Quibi’s fast demise. Six months after its debut, the company was firing talent and giving what remained of its $1.75 billion budget back to investors.

The misfire reminded us of journalism’s infamous 2018 “pivot,” in which news sites reassigned reporters en masse to manufacture ultra-short text-on-screen videos before brutally firing everyone. Similarly, Quibi was using well-paid pros to make slick $4.99-a-month subscription content that competed with YouTube, TikTok, and hordes of creators who film cat videos and dance moves for free.

In a farewell letter, studio mogul Jeffrey Katzenberg and Quibi CEO Meg Whitman said their pursuit of a “new category of entertainment” might have been misguided, but they also directed blame at the pandemic, which kept people at home in front of the TV. “Unfortunately, we will never know, but we suspect it’s been a combination of the two,” they wrote. “Our failure was not for lack of trying.”

Since 2016, several dozen US diplomats and spies in Cuba and China have been hit by a spectrum of painful and strange neurological symptoms. They’ve woken to sharp noises and experienced loss of balance and a feeling of pressure in the face. The most plausible cause of their torment, according to the National Academies of Sciences: a microwave weapon.

No one can say for sure if a directed beams of pulsed radio energy aimed into diplomats’ homes and hotel rooms are to blame for “Havana syndrome.” The US was slow to recognize and investigate the pattern of injuries and still can’t name a cause with certainty. What is clear is that anyone using a microwave weapon in deliberate attacks has failed to think things through. Other powers, including the US, can also generate powerful, invisible beams to cause headaches, clicking noises inside the skull, nausea, and hearing loss. The clandestine use of such over-the-air technology, the academies said, “raises grave concerns about a world with disinhibited malevolent actors and new tools for causing harm to others.”

Some weapons just shouldn’t be used.

Have you ever had a dream where you show up at work or school in your underpants? With Zoom, it’s entirely possible.

During the pandemic, the video app became our new office, our schoolyard, and our way to socialize. With it came the hazard of broadcasting what should remain private. There was the toilet flush as the Supreme Court held oral arguments, and the Mexican senator who changed her top on video without realizing it.

Gross-out humor turned to tragedy in the case of prominent CNN and New Yorker legal critic Jeffrey Toobin, who allegedly exposed his genitalia to coworkers as he fumbled between a work Zoom and a pornographic interlude. Many said Toobin deserved to be fired by the New Yorker, citing the #metoo movement (#metoobin became the hashtag). Others sympathized with an all-too-human situation. “There but for better camera work go I,” they seemed to be saying.

Since prehistory, humankind has looked upwards for awe and inspiration, to imagine what forces created the world—and which might end it.

But now, that cosmic view is being contaminated with the reflections of thousands of inexpensive commercial satellites put aloft by companies like Amazon, OneWeb, and SpaceX, who want to cover the Earth with internet connections. Sixty satellites can swarm out of a single rocket.

The problem for astronomers is that sunlight reflects from the satellites, which race by at low altitudes at dawn or hover overhead, perpetually illuminated. Their sheer numbers pose a problem. SpaceX plans to launch 12,000 of its Starlink satellites, while other operators plan 50,000.

Concern is greatest for wide-field optical telescopes sitting atop mountains, whose job includes detecting exoplanets or near-Earth objects that could collide with our planet. Now there’s an after-the-fact attempt to fix the problem. SpaceX tried coloring a satellite black, but it heated up too fast. More recently, the company started equipping satellites with sunshade visors to stop the reflections.

The vaccine that make you test positive for HIV

We knew things could go wrong with the rushed vaccine effort against covid-19, but the fate of Australia’s homegrown candidate was still a surprise.