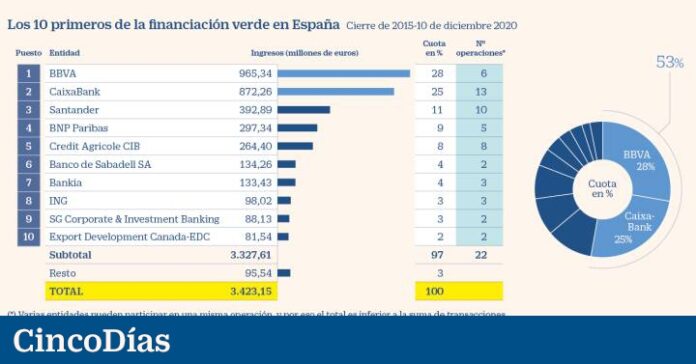 The ecological transition requires the financing of massive investments. The National Integrated Energy and Climate Plan, sent in February to Brussels, contemplates that Spain will mobilize 236,000 million euros in sustainable investments in the next decade. Of these, 80% will correspond to the private sector.

In the five years of the Paris Agreement, between December 2015 and December 2020, the Spanish financial sector has issued 3,423.15 million euros in green financing, according to data collected by Dealogic. BBVA stands out in first position for having contributed with 965.34 million. Its activity includes the financing of 11 wind farms in Spain. During the first half of 2020, the entity has participated in a total of 11 new origination operations.

Banks have issued $ 3,423 million since the Paris Agreement

In second position, with 872.26 million euros, is CaixaBank. Among the operations that have financed these years, the one formalized last March with Aguas Industriales de Tarragona stands out in the entity headed by Gonzalo Gortázar. “It was the first project finance green for a water treatment plant ”, they affirm. Also the financing granted in August to a new logistics center operated by Amazon, which has the sustainable Breeam certification.

In the third position of the Dealogic ranking appears Santander Bank, with 392.89 million euros. The entity ensures that it remains focused on promoting the financing of renewable energy and reducing its own environmental footprint in all the countries in which it operates.

The ecological transition in Spain requires the mobilization of 236,000 million

Sabadell Bank it is sixth with 134.26 million. Among the projects developed, they highlight Alpha by Enlight, the park merchant (executed without premium and without auction) the largest in Europe, with 300 MW, and a global debt volume of 160 million euros, as well as the 250 MW park of Elawan Energy, of the Gestamp group.

Behind, in seventh position, is placed Bankia with 133.43 million. Among the projects completed in Spain, the bank emphasizes its participation with 80 million euros in the syndicated financing of the Gecama wind farm in Cuenca, one of the largest wind farms in the country.

Next in the classification is placed, with 98.02 million granted, ING. Among its projects developed in Spain, the entity highlights the financing of its own headquarters for buildings that it occupies on a rental basis and that has the Leed Platinum rating. It has been built with recycled materials, solar thermal panels and rainwater collection systems, guaranteeing efficiency in the consumption of resources.

Only one in three banks (30.4%) offers financing to individuals for sustainable projects, according to an analysis carried out by HelpMyCash, in which more than twenty banks operating in Spain have been studied.

The purchase of electric vehicles and the improvement of the energy efficiency of the home are two of the purposes for which banks mostly offer their green loans to individuals.

Electric vehicles stand out in loans to individuals

The financial comparator calculates that, on average, the cost of these loans stands at 4.8% compared to 8.3% at which, according to the Bank of Spain, common consumer loans are being issued.

This is the line of the new green mortgage from Banco Sabadell for the acquisition and renovation of homes with energy rating A or B. It offers an additional 0.10% discount compared to the current offer.

BBVA. By 2025, the entity intends to mobilize 100,000 million euros in sustainable financing. In the green loan business, it has been a pioneer and fundamental driver and is today one of the most active entities on a global scale and a leader in Spain. In Europe it occupies the fifth position and on a global scale, the 16. The bank has led a total of 18 operations in Europe and America in 2019 and has been the entity that has acted more times as a coordinator and / or sustainable agent.