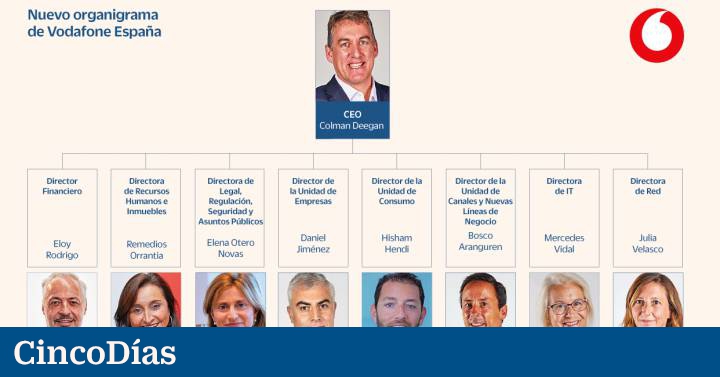 Vodafone Spain has completed a comprehensive reorganization of its top management. The company faces a new stage, with the execution of the new strategic plan, called ReStart, designed by Colman Deegan, who assumed the position of CEO a year ago.

The executive committee of the operator has four new faces, and is divided into eight main areas, of which four are led by women. The teleco has wanted to show its commitment to gender equality.

Deegan has chosen to set up a new executive committee tailored to the aforementioned strategic plan, after the departure, naturally, of Andrés Vicente, former general manager of Individuals, who has joined as CEO of Ericsson Spain, and Ismael Asenjo, former general director of Technology and Systems.

The operating areas, where the Companies business unit is located, led by Daniel Jiménez, is where the main changes take place. The operator has created two differentiated units, reporting directly to the CEO, to boost competitiveness and digitization in the consumer business of individuals.

In this way, Vodafone has created the Consumer Unit, which will ensure the development of relevant products and services related to connectivity, including their life cycle management. In this area the functions of branding, marketing, commercial planning, customer experience, big data and prepaid, among others. The person in charge is Hisham Hendi, former CEO of Vodacom Tanzania, who has more than 15 years of experience in the telecom sector, with responsibilities in Vodafone Egypt and in the group itself.

Teleco has also established the Channel Operations and New Line of Business unit, which will be in charge of expanding the portfolio of products and services beyond connectivity, promoting more efficient channel management, digitizing them and providing an omnichannel vision. This area, which opens the door to the creation of new services, is led by Bosco Aranguren, until now director of Digital Growth. Aranguren joined Vodafone in 2018, after having held different positions of responsibility in groups such as Microsoft and Google, among others.

In addition, it has appointed Mercedes Vidal with a double role as IT director of Vodafone Spain and of the group’s Global Channels. Vidal, who joins the executive committee, is an expert in technology and digital transformation, as well as leading global teams to drive consumer-centric business growth. The executive spent 16 years at IKEA, where she led the digital customer experience both in the more than 400 stores in 42 countries and in the rest of the channels. She was previously the IT Director at Ericsson Mobile.

Vidal’s arrival comes after Vodafone’s decision to implement a new operating model in the Technology area, with the integration of this unit in Europe and centralized management, to be more agile in the development and commercialization of products and services. In addition, it separated IT and network functions, internalizing software engineering capabilities.

Likewise, Julia Velasco, appointed Director of the Vodafone Spain Network, joined the executive committee in April. The executive is also director of the network core of data in Europe of the Vodafone group, which gives it a global vision and agility in the sharing of good practices between operators. Velasco, who reports to Alberto Ripepi, director of European networks, has been with the company for 20 years, with different roles in the Technology area at Vodafone Spain, Vodafone UK and the group itself.

Finally, within the areas of staff With a business support function, there is the Finance team with Eloy Rodrigo at the helm. Elena Otero Novas continues as head of the Legal, Regulation, Security and Public Affairs team, while Remedios Orrantia continues with her responsibility at the head of Human Resources and Real Estate, with the presidency of the Vodafone Spain Foundation.

Vodafone faces a time of tough competition in Spain, with a drift towards the low cost, which has caused a significant drop in revenue and profitability. The teleco has just reached an agreement with the unions on an ERE, which will mean the departure of 442 employees.

With the new strategic plan, Vodafone seeks to reposition itself commercially to preserve competitiveness, boost digitization and automation in the organization, and maximize efficiencies and synergies to become a more digital and profitable company.