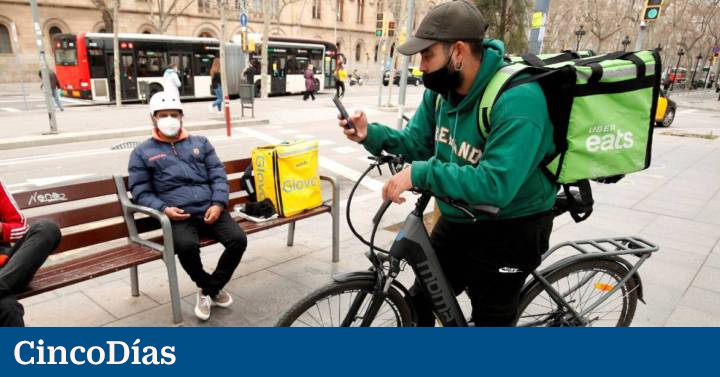 The company Uber Eats explores a new alternative and “hybrid” home delivery model that combines the contract to third parties -as at present- with work with freelancers, to whom it resorted before the entry into force of the Rider Lawaccording to sources from the company have informed Efe.

The signature, which with the application of the Rider Law Just a year ago he decided to partner with fleets that employ delivery men as salaried workers, he has sent a letter this week to a group of self-employed delivery men with whom he worked before August 2021.

The idea, according to the sources, is to inform them that Uber Eats “is exploring this possibility”, a route that would give them the option of choosing the delivery people if they work contracted by fleets or as freelancers.

“Given the evidence that the majority of delivery people in Spain want to work as self-employed, we are exploring a new model that allows them to do so while complying with current regulations,” according to the sources. “In any case, we will continue to offer the option of working with our collaborating fleets,” they added.

The new model that Uber Eats is studying, according to the sources, would give delivery drivers full control over their work, including the ability to set the price of their own fares at any time.

Uber Eats has insisted that in August 2021 it changed its model to comply with the Rider Law and opt for contracting the distribution to third parties. According to the company, “only 26% of self-employed drivers who delivered with Uber Eats before the Rider Law decided to be hired by one of the associated fleets.” The remaining 74%, having added the sources, decided to stop using the app, with many choosing to switch to an alternative option instead.

Last March, Uber Eats alerted the Second Vice President of the Government and Minister of Labor, Yolanda Díaz, of the lack of delivery men as a result of the Rider Law. Uber Eats said then that many of them preferred to work with Glovo, and assured that this firm was not complying with the law by keeping them as self-employed.

This Tuesday, Uber Eats has assured that as a result of the entry into force of the law, it has had to close operations in 66 markets (such as Ibiza) and reduce opening hours in another 120 (such as Bilbao). The same sources have highlighted the lack “of a clear direction” by the Ministry of Economy, before which it is exploring “flexible opportunities for delivery men who do not want to be hired.

Sources from the delivery associations have confirmed to Efe that they have received the communication from Uber. The spokesman for the United Distributors movement, in favor of riders or distributors remain autonomous, Gustavo Gaviria, has assured that the decision of Uber Eats allows them to return to operate with that company and that “it was seen coming”, given the “delays in their deliveries” and the loss of competitiveness against Glovo.

Regarding the possibility that Uber Eats allows delivery men to set the price at any time, Gaviria has pointed out that they still do not have more details of a change that would be a “novelty” regarding the way that company operates worldwide. “It is something positive, but it is not what we claimed in the demonstrations last year, when we wanted a reinforced autonomous model,” added the spokesman.

For its part, the Ministry of Labor has indicated that it will use all the elements to prevent compliance with the law from being flouted and that they will be “relentless” in the face of the changes that the delivery companies plan to implement.

“We are going to be implacable with the fulfillment of the law. We will do it with the resources that we have at our disposal and without ruling out even demanding responsibilities from those who make use of a distribution system that violates the law”, assured the Secretary of State of Employment and Social Economy, Joaquín Pérez Rey, in statements sent to the media this Tuesday.