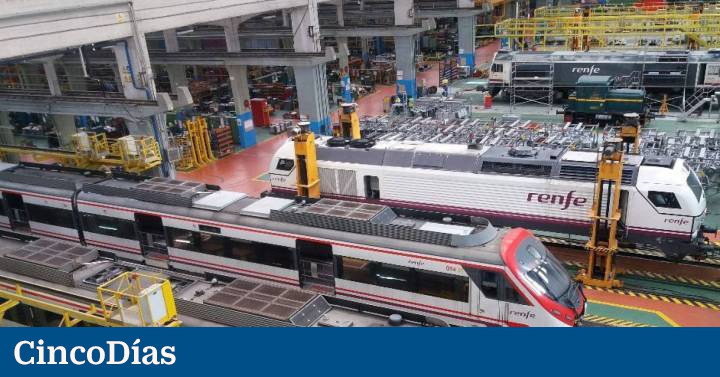 The visit of the Minister of Transport, Rachel Sanchezlast Thursday at the Valencian Stadler plant ended with a statement on Twitter that serves as an acknowledgment of receipt for a widespread claim among train manufacturers: “We take care of your concern about the increase in production costs caused by the current situation international”.

The representative of the Government was aware at the factory of how the runaway increase in copper, steel, aluminum, the price of electricity or the lack of chips is affecting an industry that serves orders for more than 4,300 million from the public Renfe.

Among those affected are the aforementioned Stadler, Alstom, CAF and Talgo, where requests for compensation mechanisms come from. Something that at the beginning of the year did not enter into the Government budgets, and that now has the support of Transport and full knowledge in the environment of the economic vice president Nadia Calvino. The hot potato must go through the Treasury.

Renfe it kept its competitions going in the midst of the coronavirus crisis as a lever for activity and employment, but the subsequent problem of inflation is putting the profitability of the contracts at risk. “If a price review mechanism is not activated, we run the risk of losing a lot of money,” explains a senior manager of a Renfe supplier.

What does not fit in the plans of the companies is the postponement in the production and delivery of the trains in search of a better economic moment. And Renfe itself urgently needs the entry of this rolling stock after putting off the acquisition of Cercanías trains since 2007 due to the financial crisis.

Three months ago he was the president of Alstom Spain, Leopold Maestuwho raised alarm about the situation in an interview given to Cinco Días: “The situation for the industrial sector is unsustainable; there is no capacity to absorb these impacts [por el encarecimiento de las materias primas]. And delaying deliveries wouldn’t help anyone. For this reason, what I ask the Treasury and Transport, aware of the situation, is that they put the solution as soon as possible”. For those dates, in Adif the review of prices was already included in the construction contracts, before which the person in charge of Alstom urged that Renfe “also do it in the technological part on contracts that were awarded with a cost base of 2019”. When manufacturers presented their offers, copper, aluminum, steel and electronic components were in another dimension.

The four major affected are going separately with their claims despite various attempts to open a common forum to channel this emergency. Renfe’s rolling stock contracts, that were received as manna by all of them, no price revision clause, as specified in the specifications. And the operator did not plan to “do anything other than what the corresponding contracts determine,” public sources pointed out weeks ago.

A situation that has signs of changing after the wink of the Minister of Transport, which would require the passage of the rebalancing mechanism by the BOE with the modification of the Deindexation Law.

Renfe has acquired 305 trains in the midst of a pandemic and has signed options on another 178 units. The investment is 3,228 million in Cercanías, 241 million in metric gauge trains, and dedicates 673 million to medium-distance electric models and Cercanías. In total they are 4,142 million in a historic program after the previous Government ordered 30 high-speed trains from Talgo, already in the approval process and which will begin to be delivered in the coming months. It is about the reinforcement before the liberalization of passenger transport and in search of the expected jump to France.

Among the main awards between 2020 and 2021 are that of 152 commuter trains to Alstom for 1,442 million; the order for 59 units from Stadler, also for Cercanías, for 988 million; 40 power units ordered from Talgo for 281 million to create new high-speed trains, and the 31 meter-gauge trains contracted from CAF for 258 million.

Regulatory modification. The railway industrial sector demands the modification of the Deindexation Law of 2015 (Law 2/2015) to allow the revision of prices when there is an increase in basic materials in supply contracts. In the infrastructure business, a reform of the same Law is also demanded to avoid that the yields of possible concessions are linked to the Spanish bond.

Fear of inflation. There is currently a new tender order for 57 electric trains for Cercanías and Media Distancia for 483 million. Only CAF has submitted an offer and the opinion is widespread in the sector that the absence of a price review mechanism has scared away potential competitors.