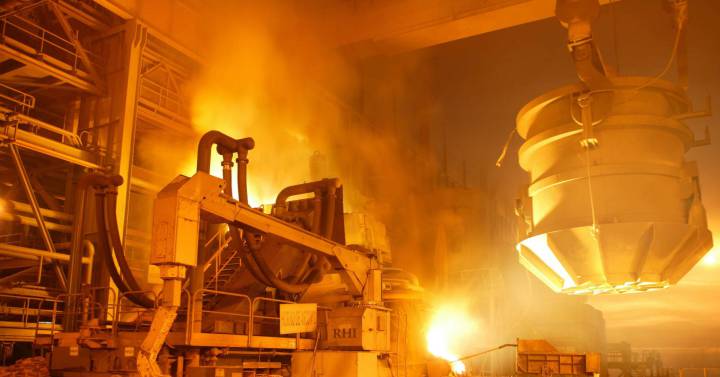 The Union of Iron and Steel Companies (Unesid) on Thursday called for “competitive” energy prices so that the steel sector can maintain planned production levels, after a “slight” reduction in activity in the first quarter of the year, motivated by the spikes in electricity prices that were registered last March and by the carriers’ strike. Its president, Bernardo Velázquez, has called for “a stable framework in which to carry out our activity, since it is not good that the rules of the game are continually changing”.

When asked what would be an optimal price level, Veláquez gave the example of the French energy model, with a fixed price of 42 euros per megawatt hour (MWh), established based on the nuclear park. In this sense, from Unesid they expect the megawatt hour in Spain to stabilize between 130 and 160 euros. “It is not about paying more and expecting to be compensated later. We want to pay a price that allows us to compete in the global market,” they warned.

In relation to the measures that have been proposed by the Government to deal with the increase in prices, the president of the association has recognized the efforts made, but has expressed that the tax reductions do not reduce the energy costs faced by the companies, “although they are positive for families. In this sense, the employers have avoided entering to assess the announcements of possible measures that could be approved in the Council of Ministers next Saturday, since, “at the moment, they are still mere rumours” and they wanted to send a message of optimism because “there is not a single forecast that points to a drop in world steel demand. As far as we know, there is not going to be a recession”.

Despite the current context, the president of the steel employers’ association has highlighted the recovery of activity in 2021, which reached 14.2 million tons produced in that year, 27% more than in the previous year. However, the steel industry fell slightly in the first quarter of this year, mainly due to energy costs and the stoppage of transport, leaving a figure slightly below one million tons produced.

As immediate threats, Unesid only believes that the activity of the plants could be interrupted in the second half of this year if the high energy costs cannot be stopped. In the steel sector, competition is worldwide, the countries all compete with each other, and if there are cheaper prices elsewhere, Spanish firms lose their attractiveness. “If the price of electricity crosses the cost curve of the Spanish steel industry, the case may come in which it is necessary to consider whether it is worth continuing to work,” they have explained from the employers’ association. In this sense, and referring to another of the risks that grip the activity, they have shown their conviction that the transport sector will not stop again because it would be “a broken one for the entire Spanish economy”.

Regarding the forecasts for this year, the general director of Unesid, Andrés Barceló, has stated that they do not expect the sector to slow down its activity, since “the order book remains strong”, although production will be marked by the evolution of the economy. “We are a very cyclical sector, dependent on the good performance of the economy”, pointed out the president of Unesid.

Among the reasons that lead us to think that activity will not be reduced is the importance and weight that steel mills have in all industrial activities, even to maintain renewables. “Faced with the problems, which exist, we cannot allow ourselves to fall into pessimism”, expressed Barceló.

In line with what was expressed by the president, the general director of the employer’s association criticized the current pricing system in Spain. “Faced with the situation in France, what is not ideal are the prices that are coming out in the pooleven after the application of the mechanism that caps the price of gas for electricity production”, said Barceló.

In his opinion, there is a “perversion” of the system, because if instead of matching the last price of a combined cycle gas plant, a hydroelectric plant does so at a higher price, it receives the price charged by that hydroelectric plant, plus the compensation for the existence of the cap of 40 euros/MWh on gas, something that he has said “is hard to understand”

Finally, Velázquez and Barceló have once again insisted on authorizing the increase in the maximum authorized mass of road freight transport vehicles to 44 tons, since it would lower transport costs. The general director of Unesid has said that the Ministry of Transport was willing to do it and a pilot project was going to be carried out for the steel industry, but “it vanished”, and now a working group is pending to be created to advance this issue.