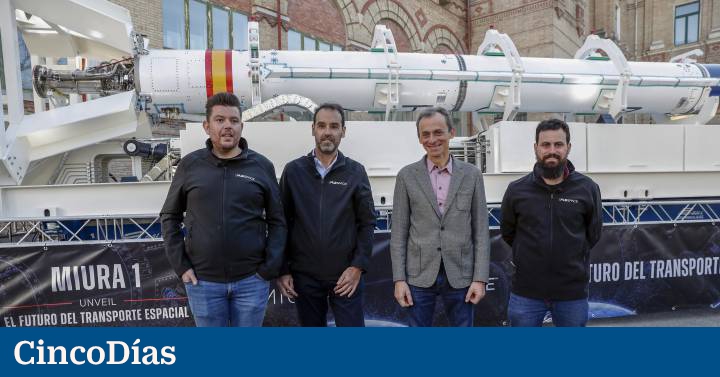 “It has been very hard work to this day.” With these words Ezequiel Sánchez, executive president of PLD Space, summarized the effort carried out by this Spanish company that wants to lead the business of reusable rockets for the dedicated launch of small satellites in Europe, and which these days fully exposes for the first time assembled its Miura 1 suborbital rocket on the esplanade of the National Museum of Natural Sciences in Madrid. This suborbital vehicle is the culmination of the dream started 10 years ago by two young people passionate about space, Raúl Torres and Raúl Verdú, project leaders and co-founders of this company that aims to make history inside and outside our borders in the space industry. considered by Morgan Stanley as the next trillion dollar industry.

With a decade of history, PLD Space plans to launch its Miura 1 prototype in the second half of 2022 and tackle its first real space transport mission with Miura 5, its second space vehicle, in 2024. The firm, based in Elche (Alicante) ) and with technical facilities in Teruel, Huelva and French Guiana, it has already achieved more than 36 million in investment to promote its project, 80% from private investors. Among its current shareholders are industrial groups such as Aciturri and GMV, financiers such as JME Venture Capital (manager heir to the José Manuel Entrecanales Foundation, created by the president of Acciona) and various family offices and business angels. The company from Elche has also had the backing of European institutions such as the European Space Agency or the European Commission.

PLD Space plans to carry out a financing round of around 100 million euros in the near future to finance its Miura 5 orbital rocket, which will mark the start of the company’s commercial satellite launches. “The launch of both rockets will make Spain the fourteenth country with access to space,” explained Torres, who highlighted how since 2008 he had already dreamed of “taking advantage of the business opportunity in the space sector and helping to democratize it, making room for new actors. in this increasingly thriving industry and that will play a key role in the coming years ”. “It has not been an easy path, but the achievements are heroic on a technical, human and financial level,” he remarked. According to the co-founder of PLD Space, to date Spain was only capable of manufacturing ships and aircraft parts, but “now we are capable of manufacturing space rockets.”

The Miura 1 rocket, exhibited in Madrid until this Sunday, will then return to the company’s base at Teruel Airport to carry out combined qualification tests (something that will take about 4-5 months), with the aim of moving later , to the technical installation of the company in Huelva. The rocket will be launched into space from the El Arenosillo base. Once there, it will validate the ground infrastructure with the National Institute of Aerospace Technology (INTA), with a view to its launch in the second half of 2022, in which, as they have explained, it will be the first launch mission of a European rocket in history, designed to reach a maximum altitude of 150 kilometers and capable of carrying a payload of up to 100 kilos. In the case of the MIURA 5, which will be launched into space from French Guiana, this load will reach 450 kilos.

“The benefits will be multiple, since it will allow us to provide service to any company or institution that wants to put its small satellites into orbit, in a more viable and safe way, with a more contained budget,” said Verdú, who highlighted the key role institutions such as CDTI, ENISA or the IVF, which have co-financed the company’s developments over the last 10 years, have played in the project.

The president of the company also highlighted “the strategic relevance” that, from an industrial perspective, the launch of the PLD Space rockets will have for Spain, “because our business model integrated throughout the value chain will allow us to have a crucial autonomy to address the future of science and national industry ”.

The act of launching the MIURA 1 rocket was attended by former minister and astronaut Pedro Duque; the director of INTA, José María Salom Piqueres; the head of the R&D Planning Area of ​​the General Sub-Directorate of Planning, Technology and Innovation on behalf of the Ministry of Defense, José Ramón Sala Trigueros, and the head of the Office for the Coordination of Strategic Initiatives associated with CDTI European funds, Jorge Lopez.

During the event, Torres and Verdú, who founded PLD Space in 2011, explained the “heroic” of this business adventure, because how they related when they launched the project that they were only 22 and 23 years old and few people took them seriously. “They were told that they looked like Mortadelo and Filemón, that they were very young for this industry, but the average age of the people who worked for NASA when the man arrived on the Moon was 33 years old and ours is 32”, said Sánchez . But, after that stage of disbelief, “we have felt very sheltered and we are covering stages and dodging challenges to achieve our dream.”

If Torres and Verdú’s dream finally comes true, Spain and Europe will have a reusable launch system. Currently, only SpaceX, by Elon Musk, founder of Tesla, and Blue Origin, by Jeff Bezos, founder of Amazon, have a similar proposal.

PLD Space has announced that the development of its Miura 5 rocket will triple the pace of work at Teruel airport, where the company has its test benches to test the engines. According to Verdú, the commissioning of this second rocket will force to carry out some 300 propulsion tests per year compared to the 30 carried out on average so far and indicated that they plan to build four new test benches at said airport during 2022, for which they already have a land reserve, with an investment of about four million euros. Sánchez also advanced that the company’s goal is to hire more than 100 professionals next year, which will mean doubling the current team. Most of the professionals are in Elche, where they have their design and manufacturing center.

Torres explained that the main technological challenges addressed to date have been the design of a liquid fuel engine for the rocket, the electronics for the flight control of the spacecraft and the development of the complete structure of the launcher. The executive president of PLD Space recognized that among the challenges that the company now faces is obtaining the necessary financing to develop the Miura 5, which will already be able to be used commercially and launch small satellites into space for public and private clients, both for civil uses. as military. Although he warned that 70% of the technologies they need for Miura 5, are already tested in Miura 1.

This latest rocket is scheduled to reach a height of between 120 and 150 kilometers after launch. The launcher will return by parachute to the waters of the Atlantic, about 70 kilometers from the launch point, from where it will be picked up by a boat, according to Torres.