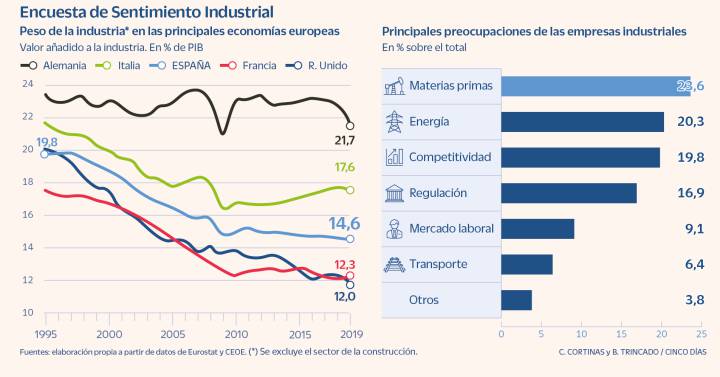 The latest data prepared by the CEOE employers show how Spain is well below the 20% target set by the European Union as a desirable weight for the industry in the national GDP. Over the last few decades, the sector has been losing prominence, going from accounting for around 20% in the mid-1990s to 14.5% today, if the energy sector is included (manufacturing represents around 11% of GDP).

There is no single reason that explains this sharp decline and it is not an exclusive case of Spain. The relocation of some companies, as well as the saturation in some activities, are largely responsible. And although the loss of prominence has been generalized in the main countries of the Union, it is true that the Spanish setback is one of the most pronounced.

To find out in depth what has caused this phenomenon and, above all, how to reverse it, CEOE has conducted interviews with almost 200 representative companies from practically all subsectors of the industry. The answers offered in its Industrial Sentiment Survey put the focus on the main concerns of companies and explain why their outlook is so negative.

The study has crossed the statistical data of economic growth registered in each autonomous community with the weight that industry has also by region and from this analysis it can be concluded that the most industrialized territories are those that have had the least setback in their GDP during 2020 , the worst moment of the pandemic.

Asked how they expect their sales to behave this year, most companies foresee an improvement compared to the two previous years, but due to the increase in production costs, spurred by the rise in raw materials and the rebound in prices of energy, many expect a worrying decline in their competitiveness. Only 1 out of every 8 firms consulted has positive perspectives on their competitiveness and only 3 out of 100 have “very positive” perspectives.

In the long term, the situation is no more promising and 52% of those consulted see the future of their sector negatively or very negatively. Barely 21% trust that they will have a positive long-term situation. After asking them to compare the situation of their activity with that of their European counterparts, 61% rate their situation as weak. Barely 11% of companies say they feel in a strong position compared to other countries. No company responds that the long-term situation of their sector is much better than what they can find in other European countries.

This result is consistent with that obtained by other studies, such as the survey growing industries about the company’s growing industry sectors Pervasives. The survey shows that there are many more growing sectors in the EU as a whole than in Spain and those activities with positive growth rates in Spain do so with less intensity.

The three major problems have been fully identified: high production costs, restrictions in the labor market and transport, which they fear will translate into a significant loss of competitiveness. Nor does over-regulation help.

Restrictions. But the worst rated is, without a doubt, the so-called over-regulation or excessive regulation, such as that which usually surrounds compliance with environmental regulations and ends up having high costs and excessive bureaucracy.