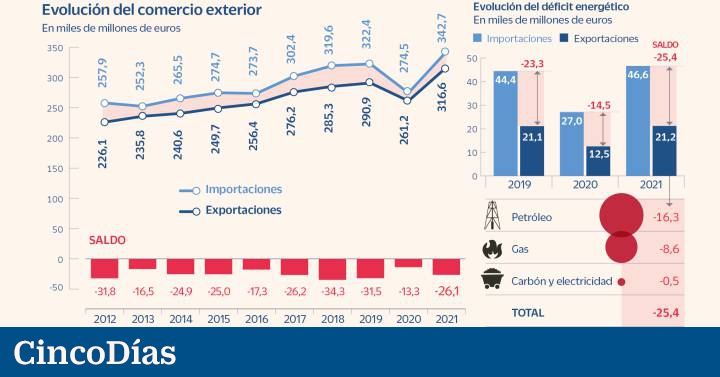 Exports of goods reached the highest level in history in 2021, with 316,609 million euros, according to the balance presented by the Secretary of State for Commerce. Sales to third countries rebounded strongly and grew by 21.2% annually in the second year of the pandemic, which was taken advantage of by the Secretary of State for Commerce, Xiana Méndezto highlight “the fundamental role” of foreign trade in the fight against the pandemic.

This good result was, however, diluted by the unprecedented increase in imports, which rose by 24.8% annually to total 342,787 million euros, which resulted in a trade deficit of 26,177 million euros, practically double compared to the closing of 2020. The argument that explains the deterioration of the trade balance is Spain’s strong energy dependency which forces it to import practically all the resources it consumes in a scenario in which the price of a barrel of Brent and that of gas have skyrocketed without finding a ceiling.

This fact was especially striking in the second half of the year, in which the trade deficit (the negative difference between exports and imports of goods) shot up to 7,870 million euros in the third quarter and to 12,910 million in the fourth quarterwhen in the first it was only 3,263 million and in the second 2,134 million. The price of a barrel of Brent it became more expensive last year by 60%, going from 50 to 80 dollars.

The export record has caused a recomposition of the sectors that contributed the most to sales of goods abroad. The automotive industry, which traditionally ranked as the second best-selling activity, has been relegated to fourth position, with a market share of 12.8%, as a result of the microchip crisis, which has caused a strong imbalance between supply and demand in the last twelve months. The lack of electronic components from Asia caused many factories in Europe and Spain to stop their production and left thousands of assembled cars waiting for the aforementioned parts to arrive. Exports from the automobile sector only grew by 5% to 40.45 billion euros. “The semiconductor crisis is still the main pending issue and it will only be resolved with investments,” assured Méndez, who trusted that the European chip directive, which aims to mobilize 43,000 million between public and private investmentobtain quick results and promote the desired objective: that the national production of electronic microcomponents in Europe accounts for 20% of the total in the world, doubling its current contribution.

On the other hand, the three sectors most benefited by the export boom have been chemical productswith a rise in sales of 32.3% to 53,725 million euros (17% of the total); equipment goodswith an annual rise of 13.8% and consolidating the first position among exporters, with 18.6% of total exports, and feeding, with 18% of sales and an annual growth of 11.1%. If in 2020, the distance in sales between the two sectors was only 337.6 million euros, twelve months later it widened to 1,789 million euros, thanks to the rebound in purchases of motors and electrical appliances, especially from France and already , quite a distance, from Italy, Belgium and France.

The impact of vaccines

In his exposition, The Secretary of State for Commerce emphasized the impact that vaccines against Covid-19 have had on the sale of medicines (integrated within chemical products), which at the end of 2021 became the fourth most exported product from Spain, with a value of 17,647 million euros, which represented an annual increase of 40.5% and a weight of 5 .6% in total Spanish exports. Only ahead of medicines are cars and motorcycles, with 29,621 million and 9.4% of the total; fruits, legumes and vegetables, with 20,942 million and 6.6% of the total, and textile products, with 18,125 million and 5.7% of the total.

Black table olive producers continue to pay a 35% tariff for sales to the US, despite the fact that the World Trade Organization declared in mid-November 2021 that they were illegal and that the Biden administration should proceed to annul them. Three months later there is no news about it. “In mid-January, the 45-day period was opened for the US and the EU to negotiate to try to reach an agreement. Despite the initial skepticism, I am confident that the US will change its position and choose to take advantage of the fact that in March the current tariffs will be reviewed again to eliminate it. We do not want complex solutions or solutions that can take time; We advocate a pragmatic resolution, which eliminates the tariff immediately”, highlighted the Secretary of State for Trade, Xiana Méndez.