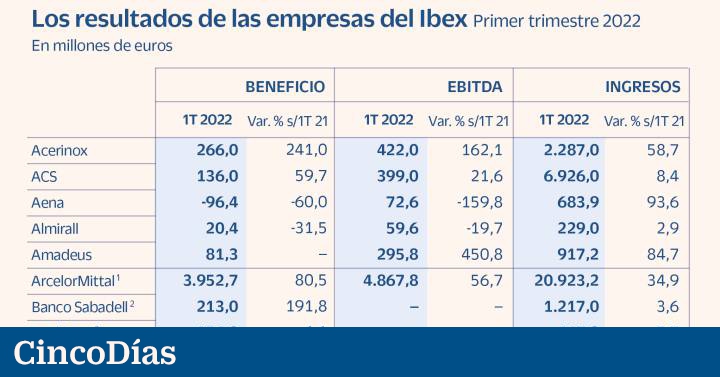 Recovery is prolonged. Three months after the Ibex 35 listed companies registered a historic profit, in the first quarter of 2022 they have continued to reap the fruits of the lifting of restrictions and the recovery of activity. At the end of March, the firms that have chosen to report to investors have reported a profit of 12,896.8 million euros, 51.5% more than in the same period of the previous year and a long way from the losses recorded in 2020, coinciding with the Great Confinement.

The improvement in the net result is also replicated in the gross operating profit (ebitda) and in the income, two variables that with a simple glance allow the solidity of the business and the balance of the companies to be analyzed. In the first three months of this fiscal year, the listed companies that had made their accounts public – the figures for Inditex, Inmobiliaria Colonial, Solaria together with Acciona and Grifols, which only publish half-yearly data – are yet to be known, the EBITDA reached 19,403 .5 million, 26% more than a year before. For its part, the turnover increased by 28.9%, to 127,850.6 million.

After having left behind the toughest moments of the pandemic, the challenge now is to maintain a positive tone. Achieving the large double-digit increases of previous quarters is complicated, and more so in an environment in which recession warnings are growing day by day. Although the accounts for the first three months already show the first effects of the war in Ukraine, its impact at the end of March was the tip of the iceberg. In the coming months, listed companies will have to face an environment in which high inflation and signs of a slowdown are beginning to shake the recovery. Preventing margins from shrinking and resuming financial discipline to comfortably overcome the increase in financing costs in an environment of monetary normalization will be the priorities of the management teams.

Although the recovery is widespread, at the end of March five listed companies continued to register red numbers. To the tourist companies Aena (-96.4 million), IAG (-787 million) and Meliá (-59.3 million) are added Cellnex (-93 million) and Siemens Gamesa (-403 million). The communications tower operator multiplied by two the losses due to the effect of higher amortizations and financial costs, associated with investment activity.The inability of Siemens Gamesa to put losses behind had an immediate effect on the management leadership.The renewable energy company appointed Jochen Eickholt as new CEO, the third in less than two years Straightening the course of the company and leaving behind the crisis that has prevailed since 2017 are the two great tasks of Eickholt, who took the helm of the company on March 1.

The recovery of tourism is still insufficient for the positive figures to be transferred to the net result. For now, the improvement is limited to revenue and EBITDA. Between January and March Meliá registered a positive operating result of 22.7 million compared to losses of 51.2 million registered 12 months ago. For its part, Aena achieved 72.6 million, in contrast to the red numbers of 121.5 million registered in the same period of the previous year.

Among the companies that experienced the greatest increases in profits, listed companies linked to raw materials stand out. In an environment marked by the rise in materials such as steel, oil or gas, Acerinox earned 266 million, 3.4 times more than the same period in 2021 and 34% more than the previous quarter. In addition to this strong increase, the steel company went a step further and achieved the best quarterly result in its history. ArcelorMittal moves along the same lines, raising its profit by 80%, to 4,125 million dollars (about 3,952.7 million euros).

The invasion of Ukraine and the recovery of activity have served as a shock to oil. In the first three months of 2022, Brent rose 38%, a rise that has expanded to 70% in the last 12 months. This increase has allowed Repsol to double its profits (1,392 million).

Outside the field of raw materials, the results of banking stood out, as well as those registered by Rovi and Indra. The pharmaceutical company takes advantage of its alliance with Moderna, one of the creators of the Covid vaccine, and raises its profit by 80%, to 53 million. With the help of a maximum order book, the technology company increases its results by 77.3% (39 million). Cie Automotive, one of the companies most affected by the increase in production costs, continues to display its strength and starts the year breaking records (82.2 million). Ebitda was also the best quarterly figure in its history, reaching 159.5 million.

Apart from ArcelorMittal (20,923.2 million), a firm with a marked international profile, Repsol manages to remain the non-financial company with the largest turnover (18,216 million), followed by Iberdrola (12,150 million). After snatching the throne of the most capitalized company from Inditex, the electric company unseats Telefónica (9,410 million) from the podium of the firm with the most income.