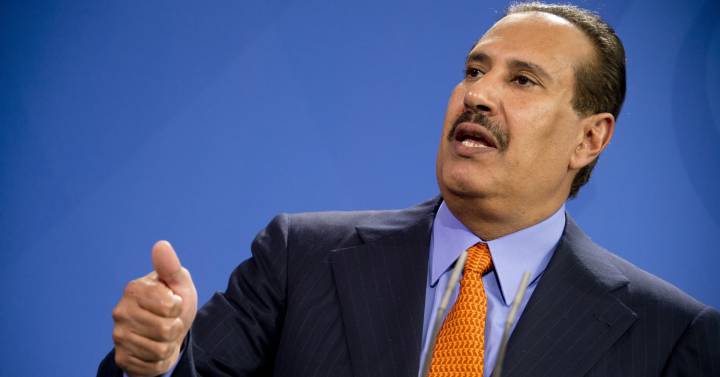 primefinthe Luxembourg company through which Qatari Sheikh Al Thani controls 11% of the capital The English Court, reduced the value of its shares in the distribution group by 15% in 2020, due to the impact that the pandemic had on the business of the company chaired by Marta Álvarez. Furthermore, she fears that the recoverable amount of your investment has been “significantly impacted”.

This is stated in the annual accounts for that year that Primefin has just deposited in the Luxembourg Mercantile Registry. These reflect a net loss of 144 million euros at the end of 2020, almost six times higher than the previous year. The annual results presented by this company usually have significant variations from one year to another. If the red numbers of 2020 were much higher than those of 2019, these, of 24.4 million, contrasted in turn with the 87 million that he won in 2018. And a year before, he lost another 46.

The reason is in the changes that Primefin undertakes in each financial year on the value of its shares in El Corte Inglés, and that they are the main and almost only asset that appears on its balance sheet. A revaluation of the same, or a devaluation, as in the case of the 2020 financial year, decant the final result of the year. To do this, it uses the future cash flow discount valuation method, introducing a series of percentages that define the value of the shares in each year.

In 2020, this was 971.6 million euros, 15% less than in 2019, or what is the same, a depreciation of 176 million compared to the value reflected in that year. This negative difference not only affects the balance sheet, but also the income statement, as it is included as financial expenses. These amounted to a total of 184.8 million, causing a net loss for the year of 144.4 million. In the part of the income, Primefin saw the dividend received by El Corte Inglés reduced by half, to 4.16 million. The distribution company decided to halve shareholder remuneration charged to 2019 profits, as a precautionary measure due to the impacts of the pandemic. For this reason, the board decided on a distribution of 37.5 million, for the 75 of the previous year.

In the management report, Primefin reviews the effects that the arrival of Covid-19 had in 2020 on its activity, and more specifically, on that of El Corte Inglés. He explains that the confinement measures or the restrictions on mobility “caused the temporary closure of all commercial establishments, except food establishments, and the premises of the travel agency and the insurer.” A situation that gradually recovered during the year, but “in the second half of 2020 and the beginning of 2021, severe restrictions on commercial openings returned.”

For all these reasons, and for “the performance of El Corte Inglés”, the Primevin management team “expects that certain assets, such as equipment, real estate, tax credits or inventories, will be significantly impacted along with the need to recognize provisions or other liabilities” , and also that “the recoverable amount of your investment may be significantly impacted”.

Even with everything, Primefin says it has a “strong liquidity position”, of more than 650 million, and “unconditional” support from shareholders.

primefin, the company of the Qatari investor, Hamad Bin Jassim Bin Jaber Al Thani, entered El Corte Inglés in 2015, when Dimas Gimeno was president of the group. He did it through a convertible loan of 1,000 million euros, which after three years became 10% of the capital of the distribution group, valuing 100% at 10,000 million.

The agreement contemplated the possibility of adding another additional 2.25%, but in 2018 he renounced it in exchange for receiving 75 million. The total participation could have reached 15.25%, depending on the fulfillment of a series of EBITDA objectives, but it only increased it to 10.33%. Now it owns 11.07%, after El Corte Inglés amortized its treasury stock.

The original agreement also included that the distribution group undertake a process of going public, through which Al Thani could recover its investment. However, this was never carried out. With the dividends, he has barely recovered 20 million.

As revealed in the prospectus for the issue of 600 million in bonds that the group launched in September 2018, Al Thani may require El Corte Inglés to facilitate the exit of its capital once 10 years have elapsed from the date of the first agreement. That is, in July 2025, three years seen. The distribution group promised to repurchase the shares that it has transferred to this Qatari investor if he pressed the sale button as of that date.

Meanwhile, the Qatari shareholder has restructured Primefin’s capital. Until March 2020, the company that owns 100% of it was Swan Island. However, coinciding with the start of the pandemic, the emirate split the property in two: the aforementioned Swan Island came to have 50%, and the other half passed into the hands of Regis Spain, also domiciled in Luxembourg.