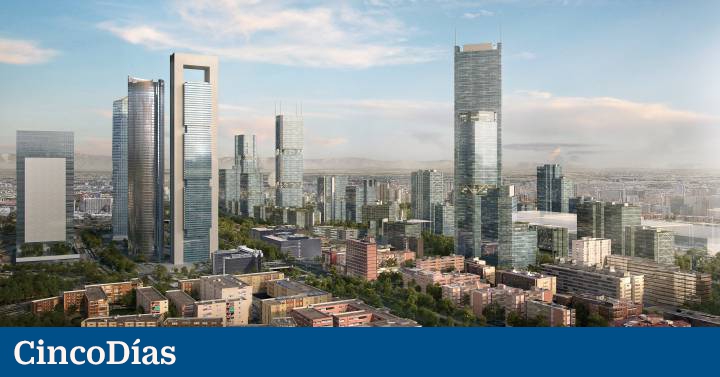 The promoter of the historic Operation Chamartín changes its name to adapt to the new project. Distrito Castellana Norte (DCN) -a company controlled by BBVA and which has Merlin Properties and San José as minority partners- will change its name to Create Madrid New Northas published this Friday in the Borme and advance Five days.

In the call for the shareholders’ meeting, the company puts to a vote the modification of article one of its bylaws in order to change the name of the corporation, a point that has already been validated in the board of directors.

DCN is the private promoter of what is known as Operación Chamartín, an urban macroproject that was later renamed the Castellana Norte District and, finally, during Manuela Carmena’s mandate as mayor, it received the name of Madrid Nuevo Norte.

Now, the company adapts to this new name of the project, at a time when years of planning have been left behind and the urbanization and development stage begins.

Operation Chamartín, an urban project to close the gap in the capital north of the Chamartín station, was born in 1993 with the then Argentaria public bank as promoter. Then the company was established SHOWER (Urban Developments of Chamartín), a company that fell to BBVA after the absorption of Argentaria.

In 2015 the development changed again, to Distrito Castellana Norte, and also the name of the developer, which was renamed DCN, a company that will control most of the land in this macro-urbanization when it formalizes the purchase option from Adif over throughout the year.

The company explains that it has chosen this new company name to face the decisive stage in the development of the Madrid Nuevo Norte urban action, which, after 28 years in the planning phase, has entered its execution phase “and, therefore, It’s already a reality.”

“The new name responds to the fusion of the two elements that define the company itself, such as the ability to ‘create’ and the objective of promoting the Madrid Nuevo Norte project, whose development will be led by Crea Madrid Nuevo Norte together with the Public Administrations and the rest of the land owners in the area over the next 25 years”, says a spokesperson.

The Madrid Nuevo Norte project will entail an investment of 25,197 million euros and will generate 350,000 jobs. Of that investment figure, 14,128 million euros corresponds to the purchase of real estate. In land acquisition, the figure reaches 3,765 million, in construction another 4,023 million and in infrastructure paid for by private capital it reaches 1,468 million. The Public Administration will spend 488 million on equipment and 1,325 million on infrastructure, for example linked to the reform of the Chamartín station by Adif or the northern highway junction.

The development affects 2.3 million square meters of surface, with 1.6 million of tertiary buildability where the new business center of the capital will be built and 1.05 million of residential buildability to build 10,500 homes.