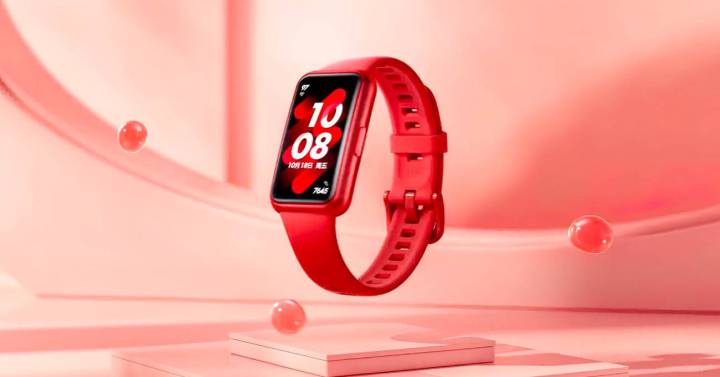 Huawei has just announced the arrival of the new alternative to the Xiaomi Mi Band. We talk about the Huawei Band 7, a new generation of its star wearable and that has some elements with which to make a difference. The most remarkable? Its NFC connectivity to make mobile payments.

HistoricallyHuawei has been the great rival of Xiaomi now to buy a smartband. And its new Huawei Band 7 comes with a series of features that make Xiaomi’s next bracelet have to aim very high to be an option to consider.

Design and features of the Huawei Band 7

On an aesthetic level, we find a model that boasts a traditional design, although in this type of device the truth is that we can expect little news. In this way, the Huawei Band 7 is almost identical to its predecessor, with that aspect that reminiscent of Apple’s Apple Watch, albeit with a more rectangular screen.

As for the technical characteristics, we will start by talking about the screen of the Huawei Band 7, made up of a 1.47-inch 368 x 194 pixel AMOLED panel to provide the best image quality. There is little we can tell you that you do not know about this technology, a type of screen that guarantees that you can see all kinds of notifications on the sunniest days.

To this we must add all kinds of sensors to monitor every last step you take. For example, boast a heart rate sensor with 24 hour trackings, blood oxygen level monitor (SpO2)NFC for mobile payments, although it dispenses with GPS to cut as much as possible and offer a product at a moderate price.

Note that this activity bracelet is capable of monitoring up to 96 different sports activities, in addition to having True Sleep 2.0the manufacturer’s technology to track sleep and control stress levels.

How could it be otherwise in a wearable with these characteristicsthe Huawei Band 7 is waterproof, in addition to offering autonomy of up to 14 days on a single charge. And beware, this model has a fast charge so that, in just 5 minutes, you have a battery for two days.

Regarding the price and release date, for now it has been presented in China at a price of 39 euros for the version without NFC, and 45 euros for the model with NFC. Without a doubt, a really attractive product.

We will have to see how the Asian manufacturer responds. Xiaomi has been dominating the sales of activity bracelets thanks to her Mi Band family. And the latest rumors suggest that the Xiaomi Mi Smart Band 7 could have a version that would include GPS, but until it is officially presented, it seems that the Huawei Band 7 is going to be a very tough rival.