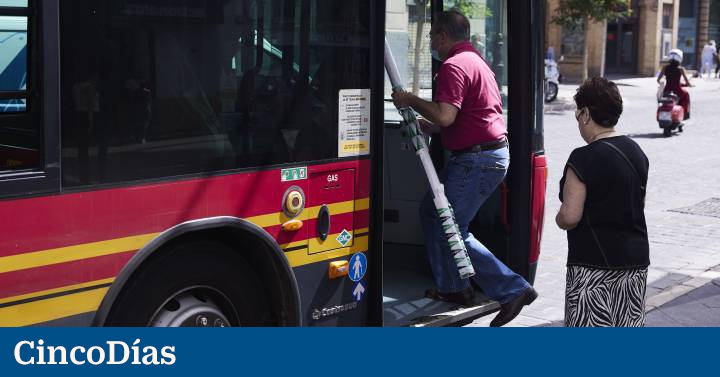 The Council of Ministers has approved this Monday a royal decree law with regulations that guarantee that the transport sector does not work below costs, that is, at a loss. With the same principles of the law of the food chain, the document requires that the contracts be in writing and with the indicated price. These measures, created to alleviate the increase in the price of fuel, also contemplate that citizens can carry out certain free itineraries by train for the next four months.

The main objectives are two: to encourage the use of public transport and the protection of vulnerable workers in the negotiation of the prices of services. For this reason, another aid package for the sector of 450 million euros and compensation to companies with public transport concessions for the increase in the cost of fuel. These initiatives are a replica of those approved at the end of March; with direct payments of 1,250 euros per truck, 950 euros per bus, 500 euros per van and ambulance, 300 euros for ambulances, taxis and VTC and 15,000 for diesel locomotives.

As announced this Monday at a press conference, María José Rallo, Secretary General of Transport and Mobility, is a “temporary” provision to resolve a specific difficulty. “For structural changes, decisions would have to be made at the European level”, she added when asked about the claim of the National Committee for the Transport of Goods (CNTC) of a bonus of 40 cents before the rise in fuel last June. “We have to see how the price evolves,” he assured. The result will be collected in six months, with an analysis of the effectiveness of the measures and the presentation of a bill on subcontracting.

The text now approved includes new sanctions. It contains a code of good practices on levels of subcontracting and conditions of transport intermediaries. In addition, new beneficiaries will receive aid that was not considered in the first aid package: urban buses, moving trucks and taxis from Ceuta and Melilla, among others.

For the secretary, encouraging the use of public transport has a triple consequence: “It is a social umbrella, it contributes to decarbonisation and reduces energy consumption.” The decree plans to stimulate its use through aid to the administrations so that they reduce the price of transport passes of your competition by 30%that of the State bus concessions by 50% and through new measures to promote rail transport, which will become effective from September 1 to December 31.

However, it is the autonomous communities that have the last word when it comes to applying price reductions to monthly subscriptions, since it is a voluntary option. The Ministry of Transport, Mobility and Urban Agenda (MITMA) has announced that it will assume the payment of the amount that the regional consortiums pay Renfe for trips on Cercanías with the condition of that this money be dedicated to lowering the price of the transport pass.

Regarding the public service obligations (OSP) in rail transport -provided exclusively by Renfe and whose losses are compensated by the public budget: Cercanías, Rodalies, conventional mid-distance, Avant or metric gauge network-, the option is opened free of charge For recurrent users, this transport will have no cost except for the Avant, whose subscription price will drop by 50%. In addition, new subscriptions will be created for high-speed commercial services for users with daily mobility.

The requirement for the free four-month subscription to Cercanías is to use at least 16 trips (four per month). To benefit from it, you must pay a deposit of 10 euros that will be returned to the card directly or at the box office, if paid in cash. For example, in Barcelona this implies the savings of more than 92.15 euros, which is the cost of one of the most used quarterly subscriptions. Rallo announced that Renfe will have about 1,000 workers, in charge of informing travelers about this measure.

In the case of conventional half distance and metric width the conditions are the same, only increases the deposit to 20 euros. According to data from the Ministry, the average price per trip is 7.59 euros, although it reaches 18.05 euros on routes such as the one from Madrid to Jaén.

Reinforcements for airport and maritime activity

With the aim of reinforcing the competitiveness of airport activity, the Ministry of Transport is going to relax the measures that were implemented for passenger management during the hardest months of the pandemic. Practically all, except the use of masks, which will continue to be mandatory for now.

Measures such as signage or the installation of hydroalcoholic gel dispensers in the facilities had been made mandatory in 2020 for better management of air travelers and aviation personnel at Spanish airports. With the decrease in positive cases of Covid-19, the Spanish authorities are going to suppress them, although the ability to recover them in the event of a resurgence is maintained. “This does not concern the masks, which depend on the Ministry of Health”, the Secretary General for Transport has added. In fact, in May the recommendation for the mandatory use of masks in airports and on board a flight was eliminated, but it was maintained on those journeys that began or ended in countries where they were mandatory on public transport, such as Spain.

In contrast, another of the measures that is now being implemented is a new regulation of the investment undertaken to facilitate and speed up the control of arrivals and departures of non-EU passengers at the airports managed by AENA, with the aim, for example, of minimizing the long queues of tourists from the UK. Also, it plans to implement the price review in the company’s construction contracts to avoid delays in investments.

And within maritime transport, Spanish shipping companies are authorized to hire private security services from foreign companies for their protection against cases of piracy. Ukrainians will also be considered citizens of the European Economic Area.