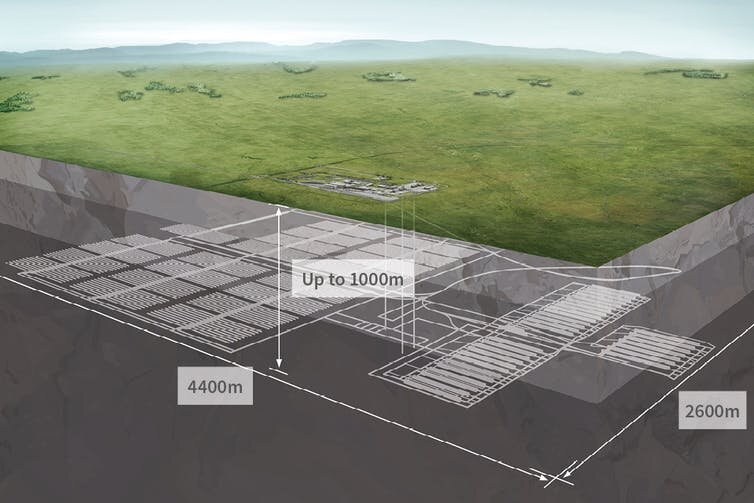 The U.K. is planning to significantly expand its nuclear capability, in an effort to decrease its reliance on carbon-based fossil fuels. The government is aiming to construct up to eight new reactors over the next couple of decades, with a view to increasing power capacity from approximately 8 gigawatts (GW) today to 24GW by 2050. This would meet around 25% of the forecast U.K. energy demand, compared to around 16% in 2020.

As part of this plan to triple nuclear capacity, also in the works is a £210 million investment for Rolls-Royce to develop and produce a fleet of small modular reactors (SMRs). SMRs are cheaper and can be used in locations which can’t host traditional, larger reactors, so this will give more options for future nuclear sites.

New reactors will inevitably mean more radioactive waste. Nuclear waste decommissioning, as of 2019, was already estimated to cost U.K. taxpayers £3 billion per year. The vast majority of our waste is held in storage facilities at or near ground level, mostly at Sellafield nuclear waste site in Cumbria, which is so large it has the infrastructure of a small town.

But above-ground nuclear storage isn’t a feasible long term plan—governments, academics and scientists are in agreement that permanent disposal below ground is the only long-term strategy that satisfies security and environmental concerns. So what plans are underway, and can they be delivered safely?

It has taken many decades of international collaboration between academic and scientific institutions and government regulators to identify a feasible route towards the ultimate disposal of nuclear waste. Previous ideas have included disposing of the extra waste in space, in the sea and below the ocean floor where tectonic plates converge, but each has been shelved as too risky.

Now, almost every nation plans to isolate radioactive waste from the environment in an underground, highly engineered structure called a geological disposal facility (GDF). Some models see GDFs constructed at 1,000 meters underground but 700 meters is more realistic. These facilities will receive low, intermediate or high level nuclear wastes (classified as such according to radioactivity and half-life) and store them safely for up to hundreds of thousands of years.

The process for creating such a facility is not simple. The organization responsible for delivering the GDF, which in the U.K. is Nuclear Waste Services (NWS), must not only overcome huge environmental and technical issues but also earn the public’s support.

Will all GDFs look the same?

Although generic design concepts do exist, each GDF will have unique aspects based on the size and constitution of the waste inventory and the geology of where it is installed. Every nation will tailor its GDF to its individual needs, under the scrutiny of regulators and the public.

Underpinning all GDFs, however, will be what is known as the multi-barrier concept. This combines man-made and natural barriers to isolate nuclear waste from the environment, and allow it to steadily decay.

The system for preparing high-level waste for storage in such a system will start with spent nuclear fuel rods from reactors. First, any uranium and plutonium that is still usable for future reactions will be recovered. The residual waste will then be dried and dispersed into a host glass, which is used because glass is tough, durable in groundwater and resistant to radiation. The molten glass will then be poured into a metal container and solidified, so that there are two layers of protection.

This packaged waste will then be surrounded by a backfill of clay or cement, which seals the excavated rock cavities and underground tunnel structures. Hundreds of meters of rock itself will act as the final layer of containment.

How is the UK program going?

The U.K. GDF program is in its early stages. The siting process operates on a so-called volunteerism approach, in which communities can put themselves forward as potential sites to host the facility. At present, a working group (Theddlethorpe, Lincolnshire) and three community partnerships (Allerdale, Mid Copeland and South Copeland in Cumbria) have formed. Whilst working groups are at earlier stages of the siting process, the next steps for community partnerships are to begin more extensive geological surveys, followed by drilling boreholes to assess the underlying rock.

Public support is the basis of the entire GDF program. While some nations may take a more heavy-handed approach and choose a site regardless of public support, the U.K. GDF mission has community and stakeholder engagement at its core.

Why would residents volunteer? This is a 100+ year project that will require a lot of people working very close by. At the community partnership stage, an investment of up to £2.5million per year, per community, is expected.

The U.K. program is some way behind certain other nations. The world leader is Finland, which has almost finished the world’s first GDF at Onkalo, several hundred kilometers west of Helsinki. Preferred sites for GDFs have also been selected in the U.S., Sweden and France.

The U.K. government aims to identify a suitable site within the next 15–20 years, after which construction can start. The timescale from siting to closing and sealing the first U.K. GDF is 100 years, making this the largest U.K. infrastructure project ever. The technology to deliver the GDF is ready; all that remains is to find a willing community with a suitable geology.

Is there another way?

It is the scientific consensus, internationally, that the GDF approach is the most technically feasible way to permanently dispose of nuclear waste. Onkalo is an example to the world that scientific collaboration and open engagement with the public can make safe disposal of nuclear waste possible.

The only other approach that has received any traction is the deep borehole disposal (DBD) concept. At face value, this is not too dissimilar from a GDF approach; drilling boreholes much deeper than a GDF would be (up to several kilometers) and putting waste packages at the bottom. Countries such as Norway are considering this approach.

Nuclear waste is piling up: Governments need to stop dithering and take action

Provided by
The Conversation


This article is republished from The Conversation under a Creative Commons license. Read the original article.