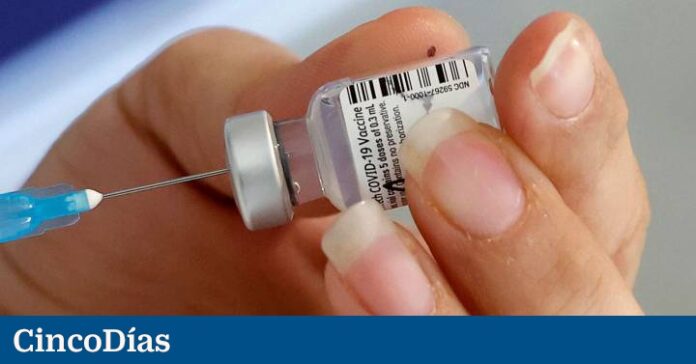 Europe authorizes the Pfizer and BioNTech vaccine against the coronavirus so that it can be administered from Sunday to the first European citizens. The European Medicines Agency (EMA) issued this Monday afternoon its position in favor of the product being used in the 27 Member States. Shortly after, the Community Executive of Ursula von der Leyen gave the final ratification.

In this way, it allows the vaccination campaign to begin in the different countries on Sunday 27. The Spanish Government confirmed last week that the plan will begin on Sunday with the elderly in nursing homes and social and health professionals on the front line of the fight against the virus.

Von der Leyen assured in a brief appearance that this license opens “an important chapter in the fight against the pandemic” and will allow the launch of vaccination campaigns “at the same time and under the same conditions” in all European countries, which will be reached the first doses from the Pfizer factory in Belgium “in the next few days”.

“It’s a good way to end this difficult year and finally start turning the page when it comes to covid-19,” he added, calling the vaccine “a true European innovation product” as it was developed together with the partner. German BioNTech, a victory he called “a true European Union success story.”

The European Union will pay 15.50 euros per dose of the vaccine developed by Pfizer and BioNTech, according to an internal EU document that Reuters has had access to. The price, which is confidential and was negotiated for a total of 300 million doses and is slightly less than the $ 19.50 per injection that the United States agreed to pay for a first shipment of 100 million doses of the same vaccine.

To achieve immunization, two injections of the product must be administered, so its price per treatment would reach 31 euros.

This price is much higher than in the case of AstraZeneca, 2.9 euros per dose (5.8 euros per person), according to the amount advanced by Minister Salvador Illa a few months ago.

Endorsement in efficacy and safety

The European Agency’s Committee for Products for Human Use (CHMP) brought together its experts to evaluate the medical data provided by Pfizer and BioNTech from clinical trials conducted with thousands of volunteers of their vaccine against Covid- 19. After analyzing the documentation in recent weeks, health technicians endorse the safety and efficacy of the product, which, as previously reported by the driving companies, protects in 95% of cases, therefore with high effectiveness.

The European Commission (EC) authorized this Monday the use of the covid-19 vaccine developed by Pfizer / BioNTech a few hours after the European Medicines Agency (EMA) confirmed its safety and efficacy, which opens the doors to launch starting next Sunday vaccination campaigns in all the countries of the European Union (EU).

The EMA reveals the commercial name of the vaccine in Europe, baptized as Comirnaty, which is authorized for people over 16 years of age. In this way, the conditional commercial authorization process for the first vaccine against the pandemic to be distributed in Europe begins. The Pfizer and BioNTech product is already distributed in the US, UK, Canada and other countries.

The committee has completed “its rigorous evaluation of Comirnaty, and has reached the consensus conclusion that there is now sufficiently robust data on the quality, safety and efficacy of the vaccine to recommend a formal conditional marketing authorization,” the committee noted. agency in a statement.

“Today’s positive news is an important step forward in our fight against this pandemic, which has caused suffering and hardship for many,” said Emer Cooke, Executive Director of the EMA. “Our comprehensive assessment means that we can confidently assure the EU citizens the safety and efficacy of this vaccine and that it meets the necessary quality standards. However, our work does not stop here. We will continue to collect and analyze data on the safety and efficacy of this vaccine to protect people who get vaccinated in the EU, “he added.

Since Comirnaty is recommended for a conditional marketing authorization, manufacturers must continue to provide medical results for two years.

Although now the European health can begin to use this alternative, it does not mean that its safety and efficacy has not been proven before. In fact, these companies have conducted a final study with almost 44,000 people from different countries in phase III of the clinical trial. They previously performed phase I (safety) and II (initial immunization evaluation). In this case, the initial research comes from Germany’s BioNTech, which has relied on US giant Pfizer for large-scale studies, production and commercial distribution.

The Executive of Von der Leyen closed the supply of 200 million doses with these manufacturers, expandable to another 100 million. By proportional distribution to the population, Spain has 21 million injections (plus another 10.5 optional). Pfizer assured that in the final stretch of 2020 it will distribute 50 million doses in the countries where its product has been approved, although the big leap will come in 2021, when it plans to manufacture 1.3 billion doses (each person must receive two punctures, so that amount serves 650 million inhabitants of the world).

Pfizer guarantees the arrival of the vaccine in hours to countries facing a logistical challenge, since the containers must be kept deep-frozen at 75º below zero. In Spain, it will deliver in 50 distribution points, which will then be distributed in batches equally among the autonomous communities. He Transportation will be carried out by distributors of approved medicines and will be monitored by the Security Forces and Bodies.

Accelerated process at the Commission

“It is a watershed moment in our efforts to bring safe and effective vaccines to Europeans. The EMA has just published a positive scientific opinion of the BioNTech and Pfizer vaccine. Now we will act fast, I await a decision from the Commission by this afternoon.” President Von der Leyen wrote on Twitter, speeding up the authorization process by her Executive, which conventionally can take up to 60 days from the recommendation of the EMA and which in this case has been finalized in hours.

Brussels had already informed that it would shorten all procedures to grant a marketing authorization for the vaccine as quickly as possible. At first, he announced that it would take about three days.

Other vaccines in Europe

This is the first recommendation for commercial authorization issued by the European body’s CHMP. Soon, on January 6, you must analyze the candidate of the US company Modern, which could be approved in 48 hours by the Community Executive and begin to be distributed in a few hours. In this case, the Commission doubled the order to this American biotech company to 160 million doses last week.

The EU has also signed supply contracts with Janssen (Johnson & Johnson group), whose product could be ready for the first quarter of 2021, the British AstraZeneca, the german CureVac, and the French Sanofi, that he has delayed a potential distribution of his research until the end of next year. The Von der Leyen Executive also negotiates with the American Novavax what would be the seventh contract European.

The German company said this is “a particularly personal and emotional day” for BioNTech. “Being in the heart of the EU, we are delighted to be one step closer to the possible delivery of the first vaccine in Europe to help combat this devastating pandemic,” Sahin said.

For his part, the president and CEO of Pfizer, Albert Bourla, was satisfied with the “strong vote of confidence” in Europe. “If the European Commission issues an authorization, we are ready to start delivering this vaccine to government designated sites across the EU where disease cases continue to increase and several countries are managing lockdowns,” he said.