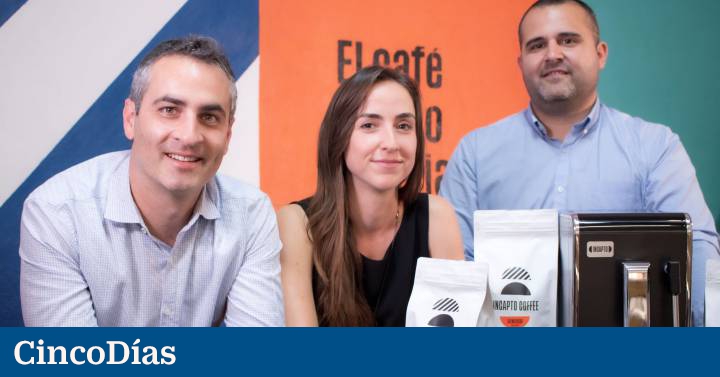 The Entrecanales family subscribe to the Incapto cafe. His fund JME Ventures has led a round of financing of 3.5 million in this Catalan startup that wants to challenge the status quo of the coffee sector. The young company, which was born in June 2020, in the midst of a pandemic, promotes the consumption of superior quality specialty coffee, along with an automatic coffee machine that allows you to taste freshly ground coffee, with the immediacy and convenience associated with capsules, but with a natural product and without generating unnecessary waste”, explains the co-founder and CEO of the company, Francesc Font.

The results achieved by the startup in a year and a half of life have also convinced Banco Sabadell, Atresmedia, Bellmoore Consulting, the Portuguese fund Bynd and Dozen Investment, which have participated in the operation. The company closed 2021 with more than 10,000 clients (a large part of them subscribers to its coffee) and more than 500 businesses connected to its coffee platform for companies. Its turnover last year was 2.3 million.

Incapto currently sells two coffee maker models, one connected to a coffee delivery platform for companies and another for individuals, without that connection. This costs 269 euros if an annual subscription is contracted to receive the brand’s coffee at home every three months (400 euros is worth without the subscription). The minimum order is 1.5 kilos. A kilo of the company’s coffee allows you to make about 120 espressos and costs about 20 euros, which means that each coffee costs the user between 17 and 25 cents, compared to the cost of the capsules, which range between 35 and 40 cents. cents, according to Font.

It will launch models of connected coffee machines manufactured in Europe

Incapto customers can choose between twelve varieties of Arabica coffee from different origins and 100% organic. According to Font, customer loyalty once they try the company’s product and service is maximum, “90%”. “What we are looking for is to democratize specialty coffee, directly attacking the capsule. With our proposal we seek that people enjoy the experience more because it is ground coffee, and it is also cheaper, since a kilo of our coffee costs between 25 and 30 euros when the capsule is around 75 euros per kilo” . The co-founder of Incapto explains that specialty coffee is “a huge global trend”, not reaching 1% in Spain but that in Northern European countries or the US it already has a penetration of 30%.

Font details that today the brands of coffee in capsules account for 50% of the coffee consumed in Spain, but 95% are not recycled. And it advances that the coffee market will take a significant turn with a decrease in the consumption of capsules. This is shown by a study by Euromonitor, which indicates that the category that will grow the most between 2020-2025 is that of coffee beans, while that of capsules will fall.

The manager is convinced that the rise of automatic coffee machines, like the one they offer, as well as the model Bundle (coffee machine plus specialty coffee) that they propose, fits perfectly with the demands of an increasingly responsible and aware consumer, who wants to enjoy a quality coffee, freshly ground, and without losing the comfort of obtaining it with a single clickbut without generating the waste caused by the capsules.

“The sector was clamoring for this change and we will put all our efforts into offering the best coffee experience,” continues the co-founder of Incaptio, who currently has offices in Barcelona and Alcover (Tarragona) and employs 30 people, with the forecast of finishing this year with more than 50 employees.

Along with Font, the company was founded by Joaquim Mach (with a track record in the world of technology startups) and Beatriz Mesas, who is a professional cupper and the second generation of a coffee company specializing in hospitality and based in Alcover, where it is currently located. locate Incapto’s toaster.

Pop-up stores. With the funds obtained in this round of financing, Incapto wants to start its international expansion. It will be at the end of 2022 in Italy, France and Portugal. It also plans to open more stores pop up in shopping centers (some were already opened last year) to publicize their brand.

Like the printers. The company will also allocate part of the money to develop new models of coffee machines. “We want to build a model similar to that of the printers, where in the end the machines are connected to our platform and the subscription will depend on the amount of coffee consumed,” explains Francesc Font.

In Spain. The coffee machines currently marketed by the company are manufactured in China through an ODM producer, which owns the intellectual property of the designs. But, the objective is that the new machines that they launch (the first will be by the end of the year) are manufactured in Spain and in other European countries. “We are going to bring manufacturing to Europe,” emphasizes Font, who does not want to reveal the precise location so as not to give clues to his competitors.

New toaster. Incapto buys the green coffee directly from the producers and roasts and packs it in its plant located in Alcover, from where the shipments are made. The company’s new plans involve opening a new roasting center in Ripollet, in the province of Barcelona, ​​and closing its facility in Tarragona.