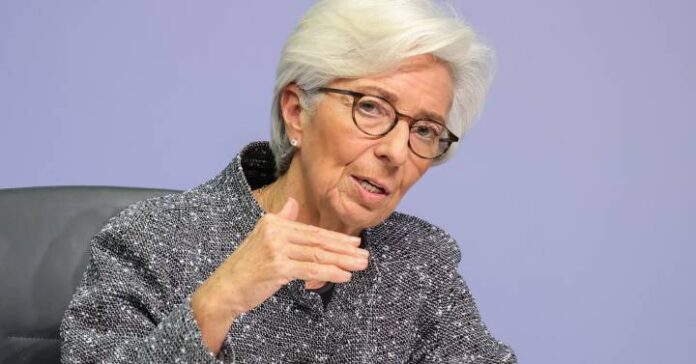 There is already a decision, and it is in line with what was expected a day before, but despite this, it does not completely convince the strongest financial institutions. The European Central Bank (ECB) yesterday recommended that banks “act with extreme caution in relation to dividends and share buybacks.” For this, it has demanded that all entities “consider refraining from distributing cash dividends and repurchasing shares or that they limit such distributions until September 30, 2021.”

In any case, it asks that given the persistent uncertainty about the economic impact of the coronavirus pandemic, dividends and share buybacks remain below 15% of the accumulated profit for the 2019 and 2020 fiscal years and not exceed 20 points. basis of the Common Equity Tier 1 Capital Ratio (CET1), if this amount is less.

But, in addition, it limits this distribution of shareholder remuneration to profitable banks with solid capital trajectories. In order to determine which entities meet these requirements, the ECB and the Bank of Spain advise them to contact “their joint supervisory team to determine whether the expected level of distribution is prudent.”

For now, the ECB is blunt and alert that “entities must refrain from distributing dividends on account of their 2021 profits.”

The limitation imposed now is still very far from the pay out (part of the ordinary profits destined to dividends) that the bank distributes among its investors, which is usually around 50% to 35%.

The European supervisor recalls that the previous recommendation of March 27, 2020 (and the subsequent extension of July 28) on the temporary suspension of all cash dividends and the repurchase of shares “reflected the exceptional and difficult circumstances to which has faced the European economy in 2020 ”. Now he acknowledges that in the revision of his recommendation certain aspects of the economy have improved, but uncertainties remain, although they have “declined” in macroeconomic projections. ”

It maintains, in fact, that despite the current challenges, “the revised projections are close to the central scenario used in the vulnerability analysis carried out by the ECB in the first half of the year, which confirmed the resilience of the European banking sector” .
The ECB recalls that the objective of the revised recommendation is to safeguard the sector’s ability to absorb losses “and provide support to the economy. It is still necessary to maintain a prudent approach, given that the impact of the pandemic has not been fully manifested on banks’ balance sheets in a context in which banks continue to benefit from various public support measures and considering that credit deterioration occurs with temporary delay ”.

The measure, imposed until September 30 and communicated on Tuesday by letter to the managing directors of the entities, would be repealed on that date “if there are no significant adverse circumstances”, and the capital and dividend distribution plans will be re-evaluated. institutions based on the result of the normal supervision cycle.

The supervisor also reminds that banks must continue to use their capital and liquidity buffers to grant credit and absorb losses. And it tells them that it will not require them to begin restoring their capital buffers before it reaches the maximum level of decline.

The banks, despite not being fully satisfied with the measure, do recognize that if the ECB had chosen to link the dividend to the capital level, the distribution of dividends would have been more complicated since the Spanish banks are at the bottom of the capital ratio of Europe.

Variable remuneration
The ECB has also asked entities through a letter to the CEOs to “be extremely moderate in relation to variable remuneration during the same period as that foreseen for dividends and share buybacks (30 September 2021) ”.

The supervisor, he explains, will evaluate “carefully the remuneration policies, paying special attention to their impact on the ability of entities to maintain a solid capital base.”

The ECB recommends that national supervisors apply the same approach to less significant institutions that they directly supervise, as appropriate.

Santander, BBVA, Sabadell and Unicaja, among others, have already communicated their objective of paying a dividend with the repurchase of shares, as stated in the recommendation of the ECB.

Spanish banks have felt discriminated against in other sectors by not being able to distribute dividends, which they believe works against them since investors prefer to invest in companies that can reward the shareholder.

The United Kingdom lifted its ban on distributing dividends by the financial sector on December 11, although with limitations, such as that banks cannot distribute more than 25% of the accumulated earnings of eight quarters that cover 2019 and 2020.

Fernando de la Mora, general director of the Álvarez & Marsal banking consultancy in Spain and Portugal, “in the United States they are discriminated by entity based on their capital needs.” The manager explained that the Federal Reserve previously performs solvency tests with the internal models of each bank and based on the results it decides whether it can pay compensation to its shareholders or not.

The entities expect that after today’s announcement their shares will trade higher tomorrow, as they consider that after the March veto their securities lost attractiveness to investors.

The Spanish banks distributed between 2019 and the first months of 2020 out of last year’s profits about 8,000 million euros in dividends, although this figure was already reduced by the pandemic, and the March recommendation of the ECB, which prevented some entities distribute the complementary of the previous year.