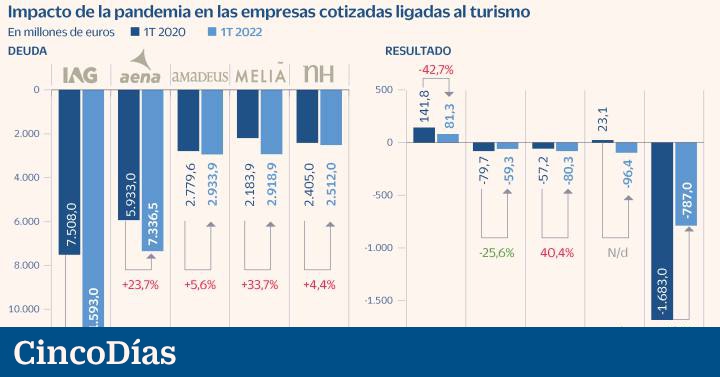 Tourism faces the straight out of the crisis. After more than two years without income, with a large part of the templates in ERTE and assuming historical losses, hotels, airlines, tour operators and travel agencies see the light at the end of the tunnel with an unprecedented rise in reservations and prices that may lead to recovering billing and profits prior to the crisis earlier than expected . In parallel, companies will have to prioritize reducing the heavy debt load they have inherited from the pandemic.

And a good example is the listed companies linked to tourism. IAG, Aena, Amadeus, Meliá and NH added a debt of 20,810 million euros at the start of the pandemic. Two years later that figure has grown by 6,485 million eurosof which IAG and Aena, the most affected by the rise in debt and the most difficult to lower it, account for 85% of the total, with 4,085 million for IAG and 1,403 million for Aena.

The restrictions on mobility and the consequent collapse of air activity caused Aena to shield its liquidity in the early stages of the pandemic. Increased indebtedness while EBITDA deteriorated. For this reason, the company fails to comply with its agreements with the creditor banks in terms of debt ratios compared to EBITDA, for which it has a waiver until June 2023.

Despite not having the pressure of its financing conditions, andhe airport manager has begun to reduce its net debt, of 7,336 million, seeking to reduce the financial cost. In this first trimester has returned 500 million to the banks and has settled 234 million of the principal loan with Enaire, as indicated in the amortization schedule. The return of activity, with the consequent recovery of EBITDA, has caused the net debt/EBITDA ratio to improve from 11.5 times as of December 31, 2021 to a new position of 8.7 times. Aena has planned maturities for 431 million this year, 1,094 million in 2023 and almost 2,000 million in 2024.

Equally affected by the collapse of flights, IAG had to load up on loans during the worst phases of the pandemic to meet its fixed costs when it hardly recorded income and the temporal scope of the crisis was completely unknown. The holding company directed by Luis Gallego concluded 2019 with 7,500 million net debta figure that has climbed to 11,593 million as of March 31 this year. The entry of liquidity due to the effect of the return of reserves begins to allow a reduction in the amount of credits.

The third most affected was Meliá. The first hotel company in Spain went from having a debt of 2,184 million in the first quarter of 2020 to another of 2,919 million euros. An increase of 735 million in two years that has only been partially offset with the sale of eight assets in July 2021, in what was an unprecedented operation in the recent history of Meliá, used to buying assets to grow and not selling them. In this transaction, eight hotels were disposed of (three in the Balearic Islands, two in the Canary Islands and another three distributed between Granada, Cádiz and Zaragoza) that went to an investment vehicle, 7.5% owned by Meliá and Bankinter respectively and the remaining 85% by private investors, for 204 million euros.

In presenting the latest results, The hotel company has set debt reduction as a priority and is preparing another sale of assets for this, which will surely materialize in the second half of the year. “The properties are identified and have names and surnames. And in all cases we are going to sell and we are going to be left with a long-term management contract (20 years)”, stressed Gabriel Escarrer, CEO of Meliá, in an interview with Cinco Días in May, in which he pointed out that the amount of the operation would be similar and that the hotels would be located mostly in the Caribbean area.

The situation is very different in Amadeus and NH, the two listed companies that have best weathered the coronavirus storm in terms of leverage. The technology company was the only one that entered the pandemic with benefits and the only one of the large tourism companies that are listed on the stock market that comes out with benefits. If the debt in March 2020 was 2,780 million euros, two years later it had only increased by 5.6% to 2,934 million. The adjustment applied by the company to reduce expenses in those two years has been very extensive, from a cost reduction plan of 635 million between 2020 and 2021 (550 of them structural), the amortization of a 500 million bond that matured in March 2022 or suspension of dividends. But the tailwind that has driven deleveraging the most, as confirmed by the company itself, is the generation of cash, already positive in 2021. “All these measures and the evolution of the business have allowed us to close the first quarter with a net debt to ebitda ratio of 3.4 times”. All this despite the fact that income between January and March barely reached 65% of that achieved in the same period of 2019 and net profit barely touched 29% of the pre-pandemic level.

Despite its good financial situation, NH, without payment commitments in 2022 and 2024faces in 2023 debt maturities for 628 million

Travel agencies have been the tourist activity hardest hit by the coronavirus crisis. The closure in the first months and the lack of activity in the following quarters led the vast majority of companies to suspend the employment of their workers and chain almost two years without income.

eDreams Odigeo, the only travel agency listed on the continuous market, has not been unaware of this trend. The firm, which presents the results of the first quarter of 2022 at the end of May, started the coronavirus crisis with a liability of 454 million euros as of March 31, 2020 and closed 2021 with 503 million. In that period, all the debt was refinanced, extending the maturity by 5.5 years, until 2027. “It will allow the business plan to be executed and the objectives set for the 2025 fiscal year to be achieved.”