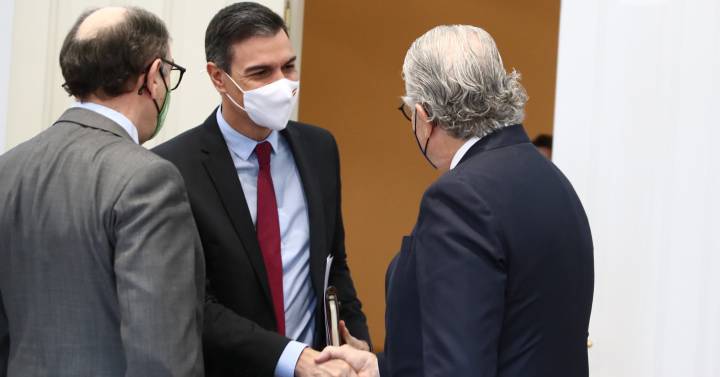 The CEOs of the energy companies Iberdrola, Enel (the main shareholder of Endesa) and Électricité de France (EDF) have requested this Wednesday that a cap be imposed on natural gas prices that will return them to their levels prior to a few months ago.

“We believe that we need a ceiling throughout the European Union so that gas prices return to at least the price levels prior to the crisis,” said Ignacio Galán (Iberdrola), Francesco Starace (Enel) and Jean-Bernard Lévy ( EDF) in a joint letter published in the ‘Politico’ media outlet. In this sense, the three executives have criticized the fact that, in the current energy price crisis, there have been various interventions in the electricity market but not in the gas markets, which are the main driver of the prices of the former.

Thus, Galán, Starace and Lévy consider that “ill-conceived changes” in the design of the electricity market or the “capture of non-existent additional benefits” will not be a true solution to the energy crisis. “It is necessary to develop liquid futures markets and long-term price signals that play a greater role, helping to cover risks and facilitating investments,” they explained, reports EP.

In any case, they have warned that any proposed solution must be applied equally to the whole of the Twenty-seven, since uncoordinated interventions between countries “distort and end up destroying” the integrated electricity market.

“Europe’s long-term objective would be to be completely independent of fossil fuels. But in the short and medium term Europe must be self-sufficient and avoid being exposed to possible interruptions from a single supplier,” they warned.

In this line, as published today Five daysthe large Spanish electricity companies (Endesa, Iberdrola, Naturgy and EDP Spain) continue to insist that the most effective way to decouple electricity prices from natural gas, which marks marginal prices in the wholesale market as being the most expensive (pool) and, therefore, the price of the rest of the energies, is to go to the origin of the problem, that is, to the cost of gas generation in combined cycle plants.

The proposal, already known, is that the cost of part of this generation be compensated so that it makes its offers cheaper and does not mark the marginal of the pool or it is lower. On the contrary, they do not want to hear about intervening in the electricity market by imposing a price cap, even temporarily.

Given that the Government has these and other options on the table to decontaminate electricity prices, Spanish companies are doing lobby in Brussels, which have intensified in recent days, so that the European Commission opts for the formula they defend, sources in the sector point out.

The proposals from the CEOs of three of the main energy companies in the community bloc come just one day before the European Council meeting starts in Brussels on Thursday and Friday, with energy as one of the main items on the agenda.