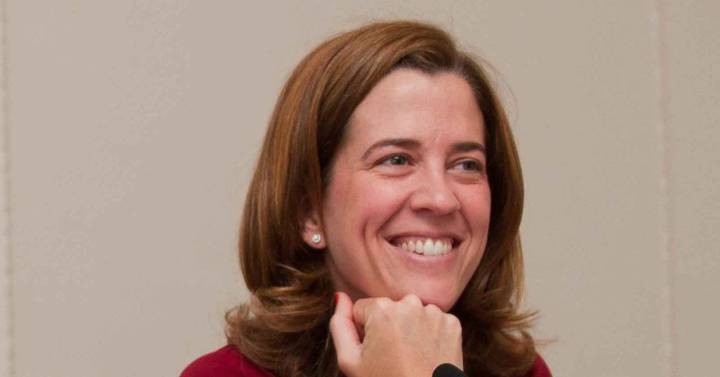 Alejandra Kindelán’s candidacy will be presented to the Association’s General Assembly, which is made up of all the member and associated banks and will be held on April 5, 2022.

Despite the fact that the sector had leaned from the beginning to a woman to replace Roldán, the truth is that his rival in these elections has been Francisco Uría, partner of the KPMG consultancy, according to sources in the sector. Among the candidates was also José Sevilla, former CEO of Bankia.

Previously, she worked as a consultant for the World Bank. Kindelán has a degree in Economics and Political Science from Wellesley College (Massachusetts) and has postgraduate studies at IESE (Madrid) and INSEAD (Fontainebleau).

The candidate to preside over the banking employer’s association has expressed her gratitude, interest and availability for the position. On her side, José María Roldán expressed his gratitude to the members of the AEB for the trust placed in him over the last eight years,
as well as his satisfaction for having been able to represent the sector during this period.

Some sources suggest that Kindelán’s salary will be around 700,000 euros.

Kindelán’s candidacy has had the logical support of Santander, but also of BBVA. In fact, both Ana Botín and the president of BBVA, Carlos Torres, commented in the presentation of the results of their respective banks for 2021, that they were in favor of a woman being the new president of the banking employers’ association.

Alejandra Kindelán will be the fifth president of the employer’s association. Its first president was Rafael Termes, who was followed by José Luis Leal, Miguel Martín and finally José María Roldán.

The challenges of the future president

Among its current challenges is improving the reputation of a sector that, after the latest office closures and Employment Regulation Files, has deteriorated. The signing on Monday of the protocol to prevent the financial exclusion of the elderly in banking can help improve the image of the sector, although now, and after this signing, the staff has started a series of mobilizations and criticisms due to the lack of personnel to carry out the signed protocol, since they consider, according to union sources, that after the departure in the last 10 years of 100,000 employees, 50% of the workers, and the closure also of 50% of the network of bank branches and old boxes, it is almost impossible to comply with the decalogue proposed by the bank, according to the Government.

Trying to resolve the regulatory differences between fintech and big tech and banking is also one of the main problems in the sector. The same thing happens with shadow banking, which is gaining more and more weight in financing companies, which is detrimental to banking.

Achieving gender equality in banking, both at the staff level and in the management leadership, is also part of the challenges of the future president of the AEB.

Traditionally, Santander’s proposal to chair the AEB has been decisive in the elections as it is the bank with the greatest weight.

One of the unknowns of Kindelán’s future mandate is whether finally the banking employers’ association, the AEB, will end up merging CECA, the employers’ association of the old savings banks, and which is currently chaired by Isidro Fainé, 79 years old of age, and that on Monday he was re-elected president of the La Caixa Banking Foundation, an institution whose main investee is CaixaBank, the largest bank in Spain.