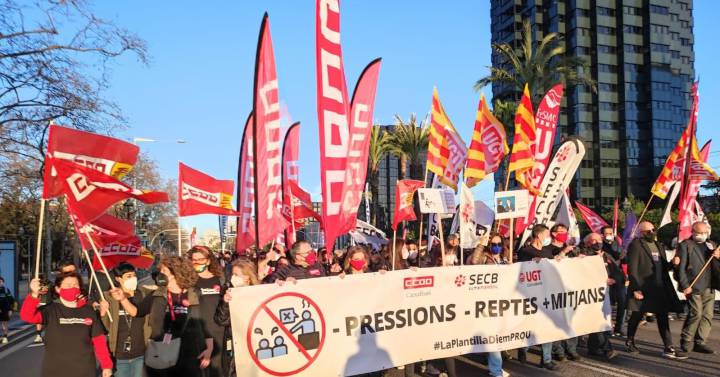 The bank has just solve a front, the one of the protests of the elderly clients before their possible financial exclusion due to the rapid digitization of the sector, and the massive closure of offices and cutbacks in the workforce, but another has been opened. Now, the workforce of the sector has started a series of protests and complaints as a result of the commercial and social pressure in which they find themselves, and to which is now added the implementation of the “decalogue of new measures to reinforce personalized attention to the elderly”, announced on Monday by the bank and the Government.

With the slogan “banks and bankers are not idiots either”, CC OO questions the “effectiveness” of the protocol published by the AEB, CECA and Unacc, since it considers that the measures “have not taken into account the participation of the templates, nor the situation in which the sector finds itself at the labor level”.

This union, the majority in the sector, criticizes “the drastic reduction of personnel undertaken” in banking, and which rises to more than 100,000 jobs in a decade, 50% of the existing employment 10 years ago, which is added to more than 50% closure of offices. Given this, CC OO considers it “unfeasible” that the measures included in the protocol to avoid the financial exclusion of older customers can be met. To which is added, according to the union, “commercial pressure from the management of the companies.” CC OO, in addition, crosses out the banking decisions of “short-term facelifts and, in some cases, short-termists.” The reaction of CC OO occurs once the financial entities have not had the participation of the staff to write the protocol for care of the elderly.

A few days ago, UGT also criticized the pressure to which the sector’s workforce is subjected. At the meeting of the Banco Santander employment table (which also launched an ERE last year that affected more than 3,500 employees), the unions demanded direct improvements in employment and “explicit support” from the management of the bank, “since we repeatedly suffer continuous harassment from public opinion, when workers strictly comply with orders from our superiors,” UGT sources explained at the time.

CaixaBank unions also demonstrated yesterday for these same reasons. It must be remembered that the banking giant approved an ERE that affected 6,452 employees. The CaixaBank staff demands improvements in their current situation “which is unbearable after the merger with Bankia due to the volume of clients they serve due to the considerable decrease in personnel after the application of the ERE”, explains UGT.

Rains, it pours. The staff of financial institutions have already demonstrated, and even went on strike last year in the face of the numerous EREs that the bank launched, with the departure of some 17,000 employees between 2021 and part of this year. At the moment, the bank does not plan to undertake new Employment Regulation Files this year, although they do not plan to reduce the number of jobs started, or stop the closure of branches.