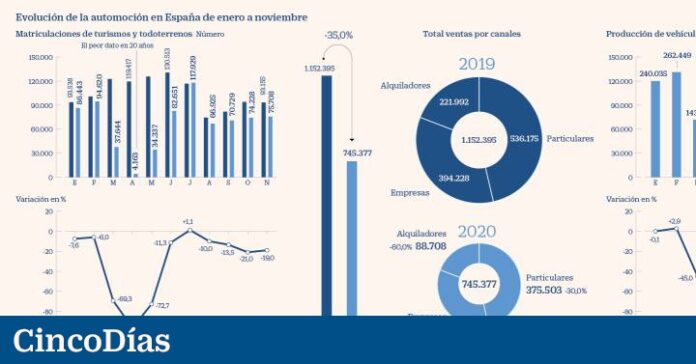 The automotive industry had a tough 2020 ahead and full of uncertainty due to the entry into force in Europe of the new European emissions regulation CAFE (Corporate Average Fuel Emissions), in a context of a widespread drop in car demand.

This year, the objectives set by Europe will be applied to 95% of the total number of vehicles registered by each group, leaving out of the calculation the 5% of the most polluting cars, which is known as phase-in. It will be as of next year when the emissions of the cars sold by each manufacturer must be below 95 grams of CO2 per kilometer traveled. If they do not comply, the brands will face billions of dollars in fines, since they will have to pay 95 euros for each gram exceeded, multiplied by the total number of cars they have registered.

However, the worst was yet to come. Covid-19 has turned the sector upside down and put it on the ropes. Car manufacturers managed to overcome the economic crisis of 2008 with great effort, but the pandemic has caused something that had not been experienced until now, such as the temporary closure of plants and dealerships around the world.

However, the motor has reached its worst crisis at a time when it faces the greatest transformation in its history: connectivity, autonomous car, mobility services and electrification. Under this conjuncture, the groups Volkswagen, Daimler, BMW, Ford, Renault, Fiat Chrysler Automobiles (FCA), PSA and General Motors recorded a combined turnover of 608,825 million euros until September (latest data available), which translates into a 18.4% drop compared to the same period of the previous year, that is, 137,892 million euros less.

The companies are somewhat optimistic after registering a recovery in their business between July and September, once the most complicated phase of the pandemic had passed. However, a great third wave of infections would be devastating for the sector. Many users are postponing their purchase decision due to uncertainty or are opting for second-hand models, which causes the fleet to continue aging and pollutant emissions are not reduced.

This goes in the opposite direction of where both the sector and the different governments are heading under the umbrella of the European Union, which has already set the decarbonization of the economy for 2050. Manufacturers have been forced to undertake restructuring plans that entail a reduction in the workforce, parking the distribution of dividends and the closure of plants. Many firms have also had to resort to loans in order to meet their obligations.

Nissan has been bleeding its plants in Barcelona little by little by withdrawing models and the closing noise has weighed on them for a long time. The worst omens were confirmed in May: “The decision has been made and it is irreversible.” This is how the Japanese brand announced the closure of the Zona Franca, Montcada i Reixac and Sant Andreu de la Barca (Barcelona) factories, a day after the Renault-Nissan-Mitsubishi alliance presented its new strategic plan, through which Nissan it will leave Europe behind to focus on China, Japan and North America.

At first, the Catalan centers had planned to lower the blind next week, but finally the company and unions agreed to extend the life of the plants until December 2021. The objective is to gain time to negotiate the entry of a buyer who gives them a second opportunity. The management of Nissan Motor Ibérica, the representation of the workers and the public administrations have constituted a working commission for the reindustrialization of plants and they manage projects related to the production of batteries to supply the European market, the assembly of electric vehicles and an electromobility hub made up of several companies. There are 2,525 workers affected by the ERE and 25,000 indirect jobs are at risk.

The main employers of the Spanish automotive industry forecast that car sales and production will plummet this year by around 35% (with some 800,000 units) and 19% (2.28 million units), respectively, and They anticipate a gray 2021 with an “extremely weak” market that will not reach even one million registered cars.

Anfac (manufacturers), Faconauto (dealers), Ganvam (distribution) and Sernauto (suppliers) have warned the Government that the adaptation of the registration tax to the new WLTP emission homologation cycle comes at the worst moment.

According to the sector, the new accounting of emissions will cause a rise in the tax and will increase the average price of cars by 800 euros, which will cause the consumer to withdraw even more.

In this sense, they demand unity in the Executive around the automobile and that a clear model be defined for the sector. “We builders want to invest in the country but we need legal security. We believe in a mobility model with zero-emission and connected vehicles, not in a mobility model without vehicles, and we need the Government to define the model it wants ”, claims the director of Manufacturing and Logistics of the Renault group and president of Renault Spain and Anfac De Los Mozos.

In 2019, car brands already invested 9% less in Spain than a year earlier, with 2,700 million euros. The 2025 vehicle awards are already being decided and Spain, the second largest vehicle producing country in Europe and the ninth in the world in 2019, has the disadvantage that it has no headquarters effect.

“We have to be much more competitive”, they have repeated over and over from Anfac, underlining that the country needs to be a “pole of attraction”, through a public-private collaboration and the stimulation of investments, for what it is It is necessary to establish a “positive, attractive and innovative” framework that allows the industry to be recognized internationally.

The President of the Government, Pedro Sánchez, announced in June the Plan to promote the value chain of the automotive industry, endowed with 3,750 million euros, of which 1,535 will be mobilized from this year and 2,215 from 2021. However, the sector denounces that it has not been implemented efficiently and asks that all administrations and political formations adhere to what should be considered a “country project”.

According to the Executive, 10 billion euros will be mobilized from the new Next Generation EU mechanism in three years to reactivate the automotive industry, which represents 14% of the total budget that Spain will receive (72,000 million).

Renove and Moves. The engine also demands that the endowments of both the Scrappage scheme (replacement of an old vehicle with a cleaner and safer one) as well as the Efficient and Sustainable Mobility Incentive Program (Moves), with 250 and 100 million euros respectively. Specifically, they request a total annual item of 450 million euros and that the aid for the purchase of a modern combustion vehicle be raised and that complies with the latest European emissions regulations. The plan includes aid to private customers of 4,000 euros for the purchase of a vehicle with a Zero label and up to 800 euros for a combustion one, although the reduction can be raised to 5,000 and 1,600 euros, respectively, if the contribution of the sector.

Brexi. The British car has warned that the sector will suffer an impact of 55,400 million pounds (62,180 million euros) during the next five years if the British country and the European Union do not reach a free trade agreement after Brexit and are imposed tariffs on the importation of vehicles.

Stellantis. PSA and Fiat Chrysler Automobiles (FCA) have already received this Monday the European Commission approval for their merger and thus create the fourth largest automobile group in the world. They expect to complete it by the end of January and the new company will have estimated sales of 8.7 million vehicles per year, only behind the Volkswagen group, Toyota and the Renault-Nissan-Mitsubishi alliance. The next step is for the shareholders of both companies to give the go-ahead on January 4.