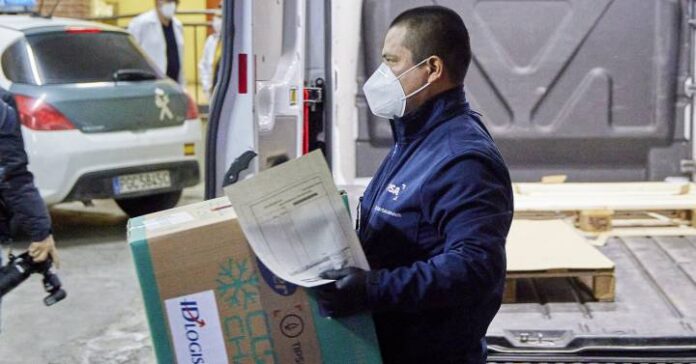 The first weekly batch of 350,000 doses of the covid-19 vaccine that Spain planned to receive this Monday to continue the immunization campaign has been postponed to Tuesday due to a delay by the pharmaceutical company Pfizer that it attributes to the loading and shipping process its factory in Belgium.

Pfizer Spain has assured the Ministry of Health that delivery “will be delayed one hours” and that the vaccines committed for this Monday will finally arrive on Tuesday. The pharmaceutical company has informed the department headed by Salvador Illa that this very night it had been informed by its factory in Puurs (Belgium) “of the delay in shipments to eight European countries, including Spain, due to a problem in the loading and shipping process. “.

The Ministry of Health has reported that, according to the pharmacist, “the situation is already resolved”, although “the next delivery of vaccines will be delayed a few hours and will arrive in Spain on Tuesday, December 29 for the continuation of vaccination throughout the National territory”.

This Sunday the immunization campaign began in all the autonomous communities with an initial delivery of vaccines that were delivered on Saturday by the pharmaceutical company. During the next twelve weeks, weekly batches of 350,000 doses are expected to arrive in Spain, completing around 4.5 million injections purchased from the US pharmaceutical company Pfizer and the German BioNTech.

In this first stage of vaccination, inmates and workers of nursing homes and centers for people with disabilities, health personnel and large dependents will benefit as they are the most vulnerable and exposed groups.

There will be 2.29 million citizens who will be immunized between January and March with the double dose of the vaccine to be applied, which will be distributed equally among the regions according to their population at risk. The first 9,750 units of Pfizer, the same amount received by each EU country, began to be injected this Sunday in the whole of the autonomous communities.

Araceli Hidalgo, 96, the oldest resident of the Los Olmos center in Guadalajara, and the nursing assistant Mónica Tapias, the youngest worker at the center, were the first people to receive the drug in Spain.

“It is a day of hope in Europe and in Spain. We are facing the beginning of the end,” Minister Illa said on Sunday, although he made a call not to trust himself because “there are still months ahead that will not be easy.”

Along with the Pfizer / BioNTech vaccine, it is expected that in the near future that of the company Moderna will be available, which will be evaluated by the European Medicines Agency (EMA, for its acronym in English) 6 January. The vaccine comes at a time of rebound in coronavirus infections in Spain, with an increase in the cumulative incidence, which reaches 262 cases per 100,000 inhabitants.