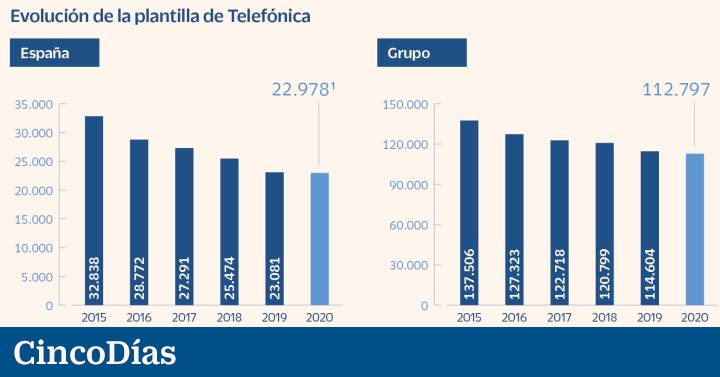 Telefónica is once again considering strategies to reduce costs, given the difficulties that the sector is experiencing in Spain, penalized by the drop in income due to strong competition. Thus, the teleco plans a new plan for voluntary redundancies in its subsidiaries in Spain, its main market, according to sources from the sector.

The exit age would be 55 years, in such a way that the group of employees that could be accepted would be around 4,000 people, almost 22% of the total of the 18,500 workers that make up the templates of the related companies agreement (CEV), Telefónica de España, Móviles y Soluciones (the group had 22,500 employees in Spain at the end of 2020, when including the corporation and other subsidiaries), and to which the plan is directed.

If a percentage similar to that of the previous Individual Suspension of Employment Plan (PSI), 60%, the number of exits would be between 2,400 and 2,500 people. In the previous plans, the exit age was 53 years, with 15 years of seniority. The teleco seeks the exit of employees who decided not to take advantage of the previous plans of leave.

In any case, everything will depend on the negotiation process that is going to be opened between the management and the unions. Industry sources point to a possible acceleration of the process, for its negotiation and approval before the end of the year.

The terms of the termination program would be in line with the two severance plans (PSI) applied by Telefónica in recent years, and included in the last two collective agreements agreed with the unions. In these plans, the assigned employees received 70% of the regulatory gross salary, the social security contributions paid by the company and maintained rights such as medical service.

If the same formula was followed, it would be the third PSI established by the operator, which opted for these adjustment formulas after the different EREs applied in previous years, and which received different criticisms due to the burdens they implied on the State coffers. In the case of ISPs, it is the company that assumes all the charges.

Telefónica had already studied in the previous months the option of launching another voluntary retirement plan, but the high cost, with multimillion-dollar provisions at a time when the company had accelerated in its debt reduction strategy, paralyzed this option. The operator did not want to include this alternative in the extension of the CEV until the end of 2022, agreed last spring with the unions.

Now the scenario seems different, once important operations such as the sale of Telxius’ mobile phone towers to American Tower or the merger in the United Kingdom of O2 with Virgin Media, a subsidiary of Liberty Global, have been closed. These transactions have brought the group’s debt to 25,000 million euros, with which the financial margin for a new retirement plan in Spain would be higher. The implementation of these adjustments forces the operator to make a strong provision in its accounts. In 2019, for example, it made a provision of 1,732 million for the PSI.

The first of the programs involved the exit of more than 6,000 people, at a cost of 3,800 million euros, while the second entailed the departure of about 2,600 workers, with disbursements close to 1,700 million. In return, Telefónica generated strong cost savings. For example, in 2020, personnel expenses in Spain fell by 9.1% organic. With the latest PSI, the teleco had estimated a generation of 210 million in recurring direct savings since 2020.

In addition, it would recover the growth of profitability in Spain, one of the approaches most demanded by investors. In the first nine months of 2021, Oibda fell 6% (8.9% in the third quarter), which placed the Spanish subsidiary as the worst in the group, within the aforementioned environment of tough competition. In the third quarter, revenues increased 0.4% thanks to the sale of handsets, while retail service revenues fell 2.7%.

Telefónica faces a different stage with the completion of fiber deployments. The company will no longer need as many employees for these network operations, after the strong development in recent years.

Corporation. In addition to the plan in Spain, Telefónica is studying exits for the corporation. In this case, it would seek agreements with those affected, who would receive compensation through deferred payments. It would not be the first plan in the corporation. At the beginning of 2020, it launched Plan 10, by which workers, with a minimum seniority in the company of 10 years, would receive five annuities, including salary and bonuses, for a period of 10 years as well.

Sector. Telefónica is not the only large operator involved in workforce adjustments. Its main competitors in Spain, Orange and Vodafone, have agreed to each ERE in 2021, which has led to the departure of more than 400 people in each of them.

UGT. UGT affirmed that the future of Telefónica cannot go through a permanent reduction of costs through the decrease in the volume of the workforce, but rather through the “decided commitment to competitiveness and the sustained increase in income”. In a statement, the union demanded a medium and long-term future plan that considers the sustainability of the company and the social and labor conditions of the workers.