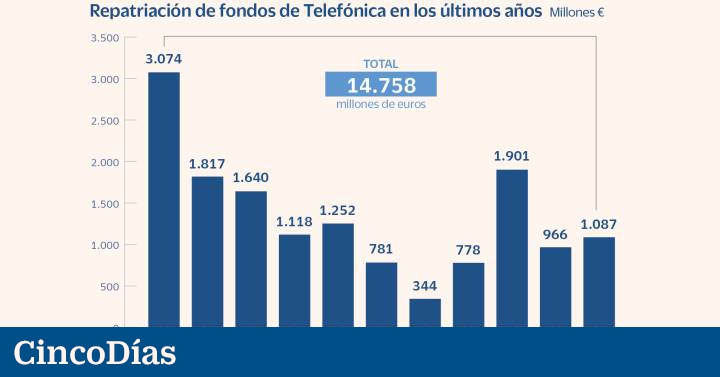 Telefónica repatriated funds from its subsidiaries in Latin America during 2021 for an amount of 1,087 million euros, 12% more than in the previous year. Of these, 712 million came from dividends paid by these subsidiaries, as explained by the operator in its annual financial report. In 2020, the group had received 966 million euros from Latin American companies, of which 746 million were as dividends.

The repatriation of funds is a key tool used by the company to mitigate country risk in all of its operations in Latin America. Since 2011, Telefónica has repatriated funds from the region for an amount close to 15,000 million euros. The company considers that these funds generated in Latin America are not necessary to undertake new profitable business development opportunities in the region.

In this sense, since the end of 2019, Telefónica has undertaken a strategy aimed at reducing its exposure to Latin America and increasing the return on capital, marked by the creation of Hispam, a division that groups its subsidiaries on the continent, with the exception of Brazil.

In recent months, Telefónica has proceeded to carry out the simplification of the portfolio in the region and the crystallization of value with different divestments. These include the final sale of the subsidiaries in Costa Rica and El Salvador with an EV/OIBDA multiple of more than seven times, as well as the sale of fiber assets to partners in countries such as Brazil, Chile or Colombia, to whom it could join Peru.

As explained by Telefónica in the recent presentation of 2021 results, the new operating model in these Latin American divisions, already in force, together with the optimization of capex, including the aforementioned fiber optic vehicles in Chile and Colombia, together with the greater allocation of debt in local currency, have contributed to a reduction in capital employed of 22% year-on-year and lower volatility.

Precisely, another of the tools used by Telefónica to reduce country risk involves partially offsetting assets with liabilities, not guaranteed by the parent company, in the Latin American subsidiaries, in such a way that a possible loss of assets is accompanied by a reduction of liabilities.

The operator indicates that, at the end of last year, it had a volume of net financial debt, not guaranteed by the parent company, of 1,265 million euros, 4.9% of the total net financial debt of the group (in some countries , as is traditional in Venezuela, there is a net cash position instead of a net liability).

Hispam once again contributed growth to the Telefónica group during 2021, after a period of great difficulties due to the economic and health crisis. Thus, revenues increased by 5.1% organically for the year as a whole (6% in the quarter), thanks to the 2.9% growth in service revenues and the 18.8% increase in the sale of mobiles. The teleco highlighted that Chile and Peru, despite strong competition, registered double-digit growth, leveraged in revenues from contract mobile and fiber. In turn, Hispam’s Oibda grew by 3.4% organically in the year.

Telefónica Brazil also increased its revenues by 2.8% in 2021 in organic terms, thanks to the mobile business and fiber optics, with an increase in Oibda of 1.8%.