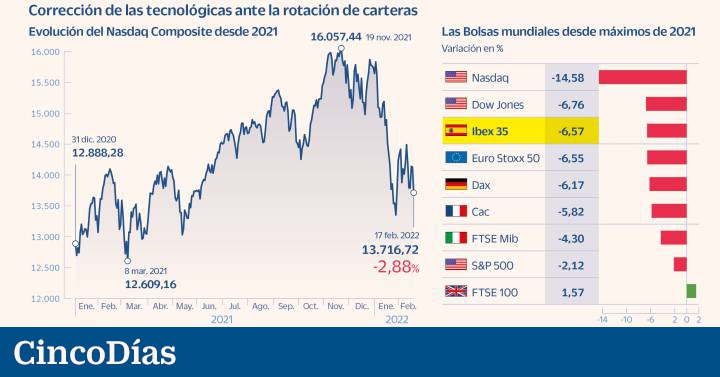 The expectation of an imminent rise in interest rates in the United States by the Federal Reserve, which is being accompanied by an escalation in sovereign debt yields that has led the 10-year bond to exceed 2%, it is causing the outflow of investment flows from equities and, more specifically, from technology companies. Since the all-time highs reached by the Nasdaq Composite last November, the selective loses 13.6%, and its members lose 4.2 billion dollars, about 3.7 billion euros.

A trend that is accelerating in recent weeks. During the first week of February alone, the net allocation to technology fell to the lowest level since August 2006, according to the latest survey of fund managers by Bank of America, which highlights managers’ fears of tightening conditions. the monetary policy of the main central banks. The last time there were net outflows from this sector was in December 2008.

Nearly half of the companies on the Nasdaq Composite have accumulated losses of more than 50% since they reached maximums at the end of last year, a level that has not been touched since 2008 and that for analysis firms is the result of the change in cycle and the commitment to cyclical values ​​that can perform better in an environment of tightening financing conditions and high inflation.

Since the start of the year, the Nasdaq Composite has fallen by 11.3%, although the evolution of the companies that comprise it is very uneven. While values ​​such as TDH Holdings have cut 89% since then, others such as Inspirato or Kaival Brands Innovation stand out 453% and 206%, respectively.

Patrick Suck, Manager of the ODDO BHF Polaris Flexible Fund, explains that “in recent months, there has been a clear correlation between rising rates and low returns from high valued stocks, which is likely to continue if rates continue to rise. There is also some risk of spillovers across the quality growth spectrum, especially to large-cap tech stocks that have done well in 2021. Valuations here are still somewhat reasonable, but also higher than in the past.”

Lofty valuations have also pushed big techs into a correction. Thus, the technology index NYSE FANG+ Index, which groups only the large global technology companies –Apple, Meta, Amazon, Alibaba, Baidu, Tesla, Alphabet, Microsoft, Netflix and Nvidia– also falls 11.3%. It is true that among the big technology companies the behavior is very uneven: the old social network Facebook is down 36.4%, while the streaming platform Netflix is ​​down 34.6% so far this year. In turn, Apple leaves only 3.7% and Amazon cuts 5.7% since the start of the year. A situation that has led hedge funds to redouble their bearish bet against these values, at the same time that they have reduced their long-term positions, according to Goldman Sachs.

Schroders’ equity team acknowledges that “the technology sector as a whole, particularly companies that are currently out of profits, may be at a disadvantage this year as investors look for opportunities in parts of the market that have hitherto been undervalued. –and, therefore, undervalued–, such as the energy sector”. Experts believe that this trend may continue beyond this year, as the Fed’s interest rates rise. “However, what we do not want is to lose sight of the long-term picture: that we are living in a world that is transforming,” they point out.

A disruption that has been carried by the manager Cathie Wood and that made her crowned the best manager of 2020 with her Ark Innovation ETF, an exchange-traded fund with Tesla, Roku, Zoom Video and Coinbase among its main bets. A bet that is not performing so well now, since the vehicle registers a negative return of 49% from its maximum in January 2021.

The investment bank UBS believes that this year the interest of S&P 500 companies in paying their shareholders via dividends or through share buybacks will be reduced. The entity calculates that the companies in this index will allocate 3.6 trillion dollars this year to capex, dividends, buybacks and corporate operations in 2022, 16% more than a year earlier. But he warns that growth will not occur in remuneration, but in investments and M&A.