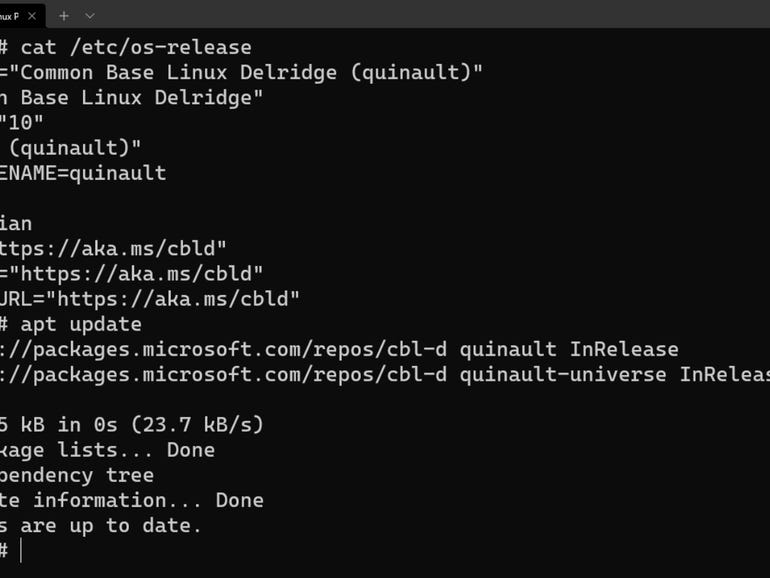 Mary Jo Foley has covered the tech industry for 30 years for a variety of publications, including ZDNet, eWeek, and Baseline. She is the author of Microsoft 2.

Microsoft’s Linux Group has been fairly public about its work on a Microsoft-created Linux distribution that is for the company’s internal use only. That variant, known as CBL (Common Base Linux) Mariner, is used across a variety of Microsoft products, from the Windows Subsystem for Linux GUI to AKS HCI, Azure Percept, and more. But it turns out there’s another Microsoft-developed Linux distribution that’s also for internal use that’s known as CBL-Delridge or CBL-D.

I discovered the existence of CBL-D for the first time this week in a rather round-about way. I stumbled onto a February 2 blog post from Hayden Barnes. a Senior Engineering Manager at SuSE who led the Windows on Rancher engineering team, which traced his steps in discovering and building his own image of CBL-D. Barnes noted that Microsoft published CBL-Delridge in 2020, the same year that it also published CBL-Mariner. The main difference between the two: Delridge is a custom Debian derivative, while Mariner is a custom Linux From Scratch-style distribution.

CBL-D powers Azure’s Cloud Shell. The Azure Cloud Shell provides a set of cloud-management tools packaged in a container. In a note on the GitHub repo for the Cloud Shell, officials noted that “the primary difference between Debian and CBL-D is that Microsoft compiles all the packages included in the CBL-D repository internally. This helps guard against supply chain attacks.”

Back to Mariner… It turns out Microsoft just hit the 2.0 milestone for CBL-Mariner a few days ago, which I discovered from this article on Linuxiac.com. Version 2.0 is still for Microsoft use only, as far as I know. CBL-Mariner 2.0 uses the latest Microsoft Linux System Group 5.15 kernel, includes major package version upgrades, and has improved SELinux support and proprietary packages required to support Nvidia hardware and CUDA.

CBL-Mariner and CBL-Delridge are just two of the Microsoft-developed Linux-related deliverables from the Linux Systems Group. Others include the Windows Subsystem for Linux version 2 (WSL2), which is part of Windows 10; an Azure-tuned Linux kernel which is designed for optimal performance as Hyper-V guests; and Integrity Policy Enforcement (IPE), a proposed Linux Security Module (LSM) from the Enterprise and Security team.

Microsoft has some other Linux-related projects it has developed in-house, including the Azure Sphere, its Linux-based microcontroller plus secure IoT service, and SONic, an open-sourced operating system for network switches, released as part of its Open Compute Project (OCP) work.

For those (like me) who are into discovering the roots of codenames and product names, Delridge has an interesting background, as noted by Barnes. Delridge is a district in West Seattle, Wash. Its current version (10) is codenamed Quinault, which is a valley in the Olympic National Park in Washington State.

How to set a static IP address on Debian server

CentOS Linux lives on in the new AlmaLinux 9

How to install fail2ban on Ubuntu Server 22.04: Jammy Jellyfish

Apecdata warns of the risks involved in choosing a ‘cloud’ provider