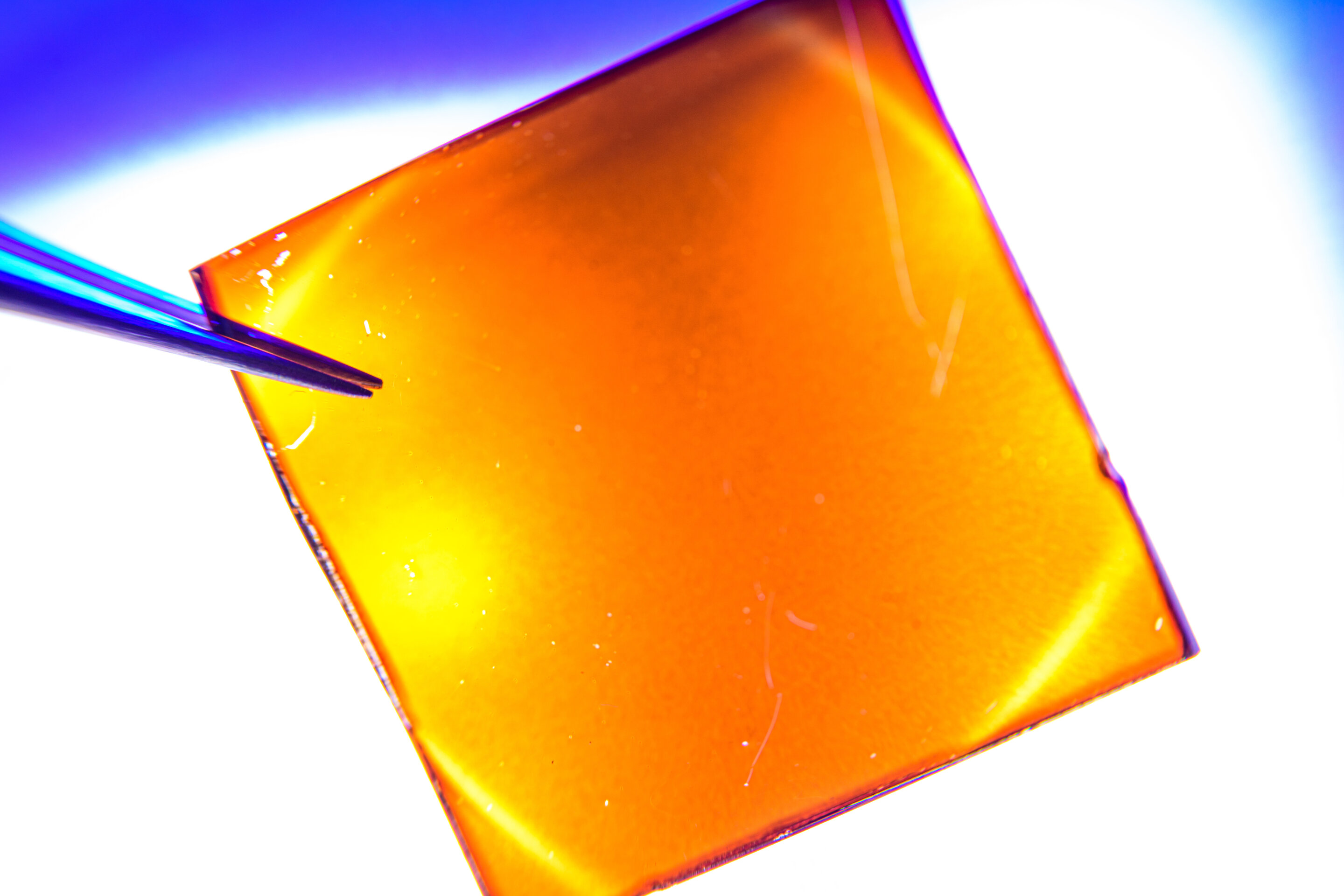 It took finding the right solvent design to apply a 2D top layer of desired composition and thickness without destroying the 3D bottom one (or vice versa). Such a cell would turn more sunlight into electricity than either layer on its own, with better stability.

Chemical and biomolecular engineer Aditya Mohite and his lab at Rice’s George R. Brown School of Engineeringreported in Science their success at building thin 3D/2D solar cells that deliver a power conversion efficiency of 24.5%.

“This is really good for flexible, bifacial cells where light comes in from both sides and also for back-contacted cells,” he said. “The 2D perovskites absorb blue and visible photons, and the 3D side absorbs near-infrared.”

Perovskites are crystals with cubelike lattices known to be efficient light harvesters, but the materials tend to be stressed by light, humidity and heat. Mohite and many others have worked for years to make perovskite solar cells practical.

“This is significant at multiple levels,” Mohite said. “One is that it’s fundamentally challenging to make a solution-processed bilayer when both layers are the same material. The problem is they both dissolve in the same solvents.

“When you put a 2D layer on top of a 3D layer, the solvent destroys the underlying layer,” he said. “But our new method resolves this.”

Mohite said 2D perovskite cells are stable, but less efficient at converting sunlight. 3D perovskites are more efficient but less stable. Combining them incorporates the best features of both.

“This leads to very high efficiencies because now, for the first time in the field, we are able to create layers with tremendous control,” he said. “It allows us to control the flow of charge and energy for not only solar cells but also optoelectronic devices and LEDs.”

The efficiency of test cells exposed to the lab equivalent of 100% sunlight for more than 2,000 hours “does not degrade by even 1%,” he said. Not counting a glass substrate, the cells were about 1 micron thick.

Solution processing is widely used in industry and incorporates a range of techniques—spin coating, dip coating, blade coating, slot die coating and others—to deposit material on a surface in a liquid. When the liquid evaporates, the pure coating remains.

The key is a balance between two properties of the solvent itself: its dielectric constant and Gutmann donor number. The dielectric constant is the ratio of the electric permeability of the material to its free space. That determines how well a solvent can dissolve an ionic compound. The donor number is a measure of the electron-donating capability of the solvent molecules.

“If you find the correlation between them, you’ll find there are about four solvents that allow you to dissolve perovskites and spin-coat them without destroying the 3D layer,” Mohite said.

He said their discovery should be compatible with roll-to-roll manufacturing that typically produces 30 meters of solar cell per minute.

“This breakthrough is leading, for the first time, to perovskite device heterostructures containing more than one active layer,” said co-author Jacky Even, a professor of physics at the National Institute of Science and Technology in Rennes, France. “The dream of engineering complex semiconductor architectures with perovskites is about to come true. Novel applications and the exploration of new physical phenomena will be the next steps.”

“This has implications not just for solar energy but also for green hydrogen, with cells that can produce energy and convert it to hydrogen,” Mohite said. “It could also enable non-grid solar for cars, drones, building-integrated photovoltaics or even agriculture.”