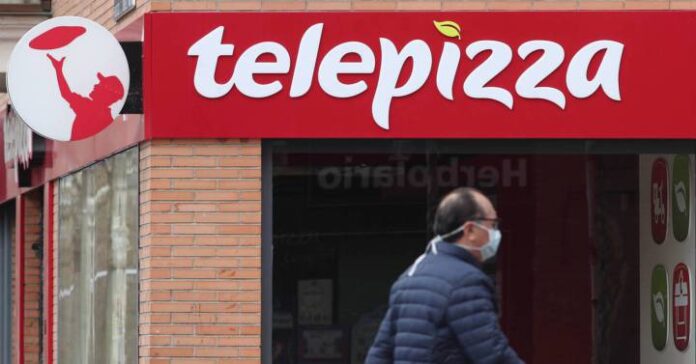 Fresh money for Telepizza. The restaurant company, now called Food Delivery Brands, will receive 82 million euros in new funds, which will give it more liquidity in a year of suffering from the coronavirus crisis.

An amount that is divided into two tranches. The first is a new loan of 40 million granted by Santander and that has the guarantee of the ICO for a term of five years and an annual interest of 3.75%. Among the requirements, the company has informed, it is included that Food Delivery Brands must have a minimum level of liquidity, although it has not detailed a figure. A loan that is added to the one that the company already received at the beginning of the pandemic for 10 million and that will be integrated into this new financing.

In addition to the minimum liquidity, other requirements for Telepizza to access this credit is, in addition to the confirmation of the ICO guarantee, that the owner of the group, the KKR fund, contributes at least 20 million euros during the coming weeks.

They will be joined by another 22, which will make a total of 42 million in direct injection from shareholders. “The commitments of funds received demonstrate the trust and commitment of KKR and the rest of the shareholders in Food Delivery Bands and its management team that the company becomes the world’s leading multi-brand digital operator”, values ​​in a note from Press KKR partner Nat Zilkha.

The restoration group recently appointed Jacobo Caller as its new CEO. “With this contribution of funds, the group will have the financial strength in the medium term to execute its business plan and continue offering the best experience for the consumer”, he valued, thanking “the trust and support of Banco Santander, ICO and the shareholders of Food Delivery Brands ”.

As this newspaper published at the end of November, Food Delivery Brands continued to explore new financing endorsed by the ICO. In its financial report for the third quarter, it detailed contacts “with several Spanish financial entities” to explore access to more credits of this type, “designed to cover the impacts derived from Covid.” In addition, it analyzed resorting to “other financing alternatives” in order to “optimize the current capital structure, in order to adapt it to the new commercial circumstances and the economic and competitive environment as a result of Covid-19, in addition to obtaining the resources financial resources necessary to fully develop the business plan for the coming years ”.

In addition to ICO credits; Telepizza has also accessed a 45 million revolving loan maturing in 2026 and facilitated by four entities. As of September 30, this line was fully ready. The cash position on that date was 50 million, which according to the company allowed it to “address the health emergency and continue operations.”

Until September, Telepizza recorded an attributable net loss of 38.6 million and revenues of 257 million, 12% less. Together with those of the franchises, these were 726 million, 21.4% less.

Even so, activity showed signs of recovery in the third quarter, continuing the good symptoms shown in May and June. During that period, Food Delivery Brands’ revenues reached 86 million, 16% less than a year earlier, or optimistically speaking, an 84% recovery in sales. A figure that corresponds to the restaurants managed directly by the company, up to 465. What the company calls chain sales, which include both its own stores and franchisees, reached 241 million, 23.6% less. The pace of recovery in the latter is slower, while they have also been affected by a greater number of closures.

As of September 30, this type of premises were 1,804, 101 less than in the previous year. On that date 89.4% of the network had already been able to reopen, although with a higher proportion in the European market, with 97 %. In Latin America, reopenings reached 82%.

Food Delivery Brands also managed to register a positive ebitda between July and September, of seven million euros, almost 60% lower than it had a year ago.