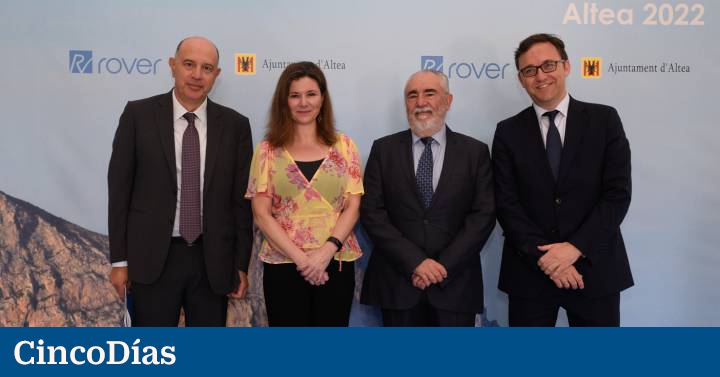 The president of the construction group Rover, Alfredo Rodriguez, has announced this Friday in Altea (Alicante) its intention to move some of the departments of its company to that town, including innovation. The commitment was launched during the first day of Innovation for Sustainability on the Coast in the face of Climate Change, promoted by Rover Maritime and that has brought together experts in the field and representatives of different Administrations.

Alfredo Rodríguez emphasized to the more than 600 attendees that society “has given us a clear mandate: to fight against climate change and for environmental sustainability”. He has also taken advantage of his intervention to announce that Rover has a project underway to create artificial reefs from sustainable concrete.

Regarding this latest environmental initiative, the Rover Group’s R&D director, Lisardo Fort, has warned of the “constant erosion and receding of the sand on our coasts caused by climate change, our beaches are undergoing significant changes”. As a defense strategy, the company has thought of submerged ecological concrete structures that protect against coastal phenomena and generate new marine habitats.

The protection of the coast against the effects of global warming is one of the bases of the National Plan for Adaptation to Climate Change. A challenge to which James Llinares, mayor of Altea, has demanded coordination: “The future of the planet requires the commitment of all, administrations and private companies. The sum of efforts is key”.

The Mediterranean, according to Maria Luisa Martinez, general director of Ports, Airports and Coasts of the Generalitat Valenciana, is “zone 0 of climate change”. The Valencian representative urges collaboration between administrations, and of these with the private initiative. She listened to the General Secretary for Transport and Mobility, Maria Jose Rallo, who has referred to the urgent action on two fronts, that of mitigation by reducing greenhouse gases, and that of adaptation to a change “that is already here and to which we cannot turn our backs. The great lever to act is innovation”.

Centimeters rising in sea level, extreme wave and wind phenomena on the coast, the cold drop or periods of drought, are some of the symptoms of the worsening of the planet that he has put on the table Jose Camachofrom Scientific Officer of the World Meteorological Organization.

Virginijus Sinkevicius, Commissioner for the Environment, Oceans and Fisheries of the EU, closed the day with a message in which he made it clear that the EU takes the protection of the marine environment very seriously. “I have no doubt that ports will play a key role in the ecological transition, and we must have good planning for the maritime environment so that its protection coexists with economic development.” In the closing act, the autonomous secretary of Public Works, Transport and Sustainable Mobility of the Generalitat Valenciana, Maria Perezhas warned that “we face the challenge of adding value to our coast while we must safeguard it from the negative effects of climate change”.