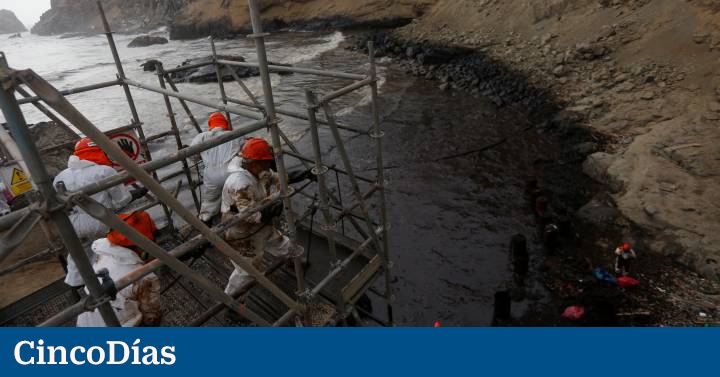 Repsol has initiated legal action against the owner of the Mare Doricum oil tanker for the accident that occurred in mid-January: the spill of more than 10,000 barrels of oil in Peruvian waters.

Through its lawyers, the Spanish group has filed a claim with the owners of the Mare Doricum and their insurers, which marks the start of the coverage process for the damage caused by the oil spill, company sources told Europa Press. .

According to what El País has advanced this Monday, the company considers that the accident was caused by a sudden displacement of the oil tanker Mare Doricumwhich destroyed the hoses and the discharge system.

Thus, through La Pampilla Refinery (Relapasaa), the energy company has initiated the procedure and has demanded, in the first place, the provision of guarantees in Peru that cover both environmental damage and that directly suffered by third parties such as fishermen, merchants and workers of the zone, as well as all the expenses that Relapasaa has incurred in the repair and cleaning tasks.

Last Friday, representatives of Repsol appeared in a Commission in the Peruvian Congress to explain their response to the oil spill and the cleanup and remediation plan launched by the company after it.

The president of Repsol Peru, Jaime Fernández-Cuesta, and the director of Optimization, Logistics and Sales of Refining Peru, Luis Vásquez, also presented the company’s social actions to support the communities affected by this event, also providing the documentation required and committing to deliver in writing the detailed information requested by the Commission.

Likewise, they highlighted that, to date, the cleaning actions had already reached an advance of more than 67%, committing themselves to “return the Peruvian coast to its natural state.”

The company anticipates that throughout this month of February the first stage of the response plan will be completed, which involves the high seas and more accessible beaches; and in March, the areas of difficult access.

Repsol has deployed a contingent of almost 2,500 people for cleaning and has implemented the use of state-of-the-art technology for satellite and real-time tracking.

In addition, the group has brought to the country the best specialists in events of this nature, such as the companies Environmental Resources Management (ERM), Lamor and OSRL.

Likewise, Repsol has reached agreements and collaboration acts to date with 34 groups of fishermen and merchants from the towns of Chancay, Ancón, Santa Rosa and Ventanilla, among others, comprising more than 2,400 people.

Peru recognizes progress, but fears it is superficial

This weekend, the Peruvian Environment Minister, Modesto Montoya, recognized the work of the Spanish oil company Repsol in cleaning up the crude oil spilled on the Peruvian coast, although he expressed concern that it is a “superficial” commitment.

“There is an advanced cleaning of the coasts, but only the superficial part. On the islands that we have visited we see a foam, we have found some 200 dead birds, 1,000 affected birds, and the Repsol company has not yet started cleaning that foam,” Montoya pointed out in statements collected by the Peruvian radio station RPP.

Last Friday, the country’s environmental assessment and control body (OEFA) also announced that imposed a fine of 460,000 soles (about 108,000 euros) on Repsol for non-compliance of the first measure ordered, related to the identification of the areas affected in the environmental emergency.

In addition, the country’s body stresses that these sanctions could continue to be applied “successively until compliance is proven.”