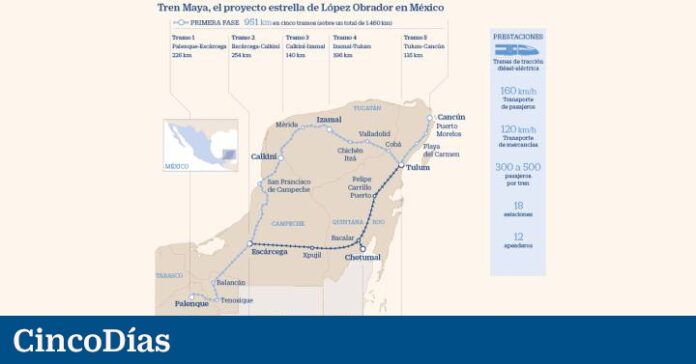 Renfe has taken a new and very important international leap with its entry into Mexico to advise on one of the main railway projects launched in America: the construction of the Maya Trends and the ordering and putting into circulation of rolling stock.

The consulting services that will be provided to the promoter of the line, the Mexican state company Fonatur, will last for three years and amount to 13.5 million euros. During this period, Renfe will play an essential role in the development of an initiative whose investment is planned in 6.5 billion euros.

The other great project in America, the one on the high-speed line between Houston y Dallas, in Texas (USA), is also being advised by Renfe, which also holds the actual operating contract until 2042. Its revenue portfolio in the Texan AVE, which it agreed to with a prior contract of shadow operator like the one now signed in Mexico, is estimated at $ 6 billion.

Beyond this trajectory in America, Renfe operates high speed in Saudi Arabia (Mecca-Medina line) and aspires to be an advisor to the line Rail Báltica, which will link Estonia, Latvia and Lithuania. The group chaired by Isaías Táboas has also placed its expectations on possible contracts for Cercanías in France.

The Mayan Train will have mixed use, for the transport of passengers and cargo. It will link the regions of Campeche, Chiapas, Tabasco, Quintana Roo and Yucatán, in the Yucatán Peninsula. Its extension will reach 1,460 kilometers divided into two phases: the first between Palenque and Cancún with 951 kilometers, and a second that goes from Cancún to Escárdega and that extends along 509 kilometers. A good part of the route does not require expropriations as it has to be built on old lines.

Part of the project, yes, is still subject to tough negotiations between the Government of Andrés Manuel López Obrador and the indigenous populations, who see in the Mayan Train a threat to their way of life and the natural environment.

The initial role will be of ‘shadow operator’ for three years, with a contract of 13.5 million

Among the tasks of the winning consortium is the design of the requirements for the operation of the line or the maintenance needs. Shadow operator jobs often also involve demand studies or the proposal of business models. Another key will be the control of the production and supply of rolling stock, an issue on which Fonatur has already requested samples of interest from international train manufacturers.

Renfe and its consortium allies will remain in charge of the infrastructure until the testing phase begins, which is expected in 2023 for the first phase.

The consortium with Ineco and DB Engineering & Consulting had bid in October to become shadow operator of the infrastructure that drives the current Administration. López Obrador has shown determination to carry out the works in the midst of the crisis once he suspended the star project of his predecessor: the New Mexico City International Airport.

In front of Renfe the team of Ferrocarrils de la Generalitat de Catalunya and Audingintraesa. But Renfe and his team went above the budget that Fonatur expected, although this had not been expressed in the specifications, and the seconds did not reach the required technical score. The contest was declared void, but Fonatur has continued negotiating with the Spanish-German option in search of an operator.

For the Spanish infrastructure and transport sector, this new triumph of Renfe outside its natural market is proof of solvency. The company has updated its business plan and goes from giving a weight of 10% on sales to international activity in 2028, to a new goal of 20% on revenues.

Companies from all over the world. Spanish manufacturers Talgo and CAF; the German Siemens; the Canadian Bombardier, the Chinese companies Huawei, CRRC Zhuzhou Locomotive y China Railway Construction Corporation; the french Alstom y Thales, or the Swiss Stadlerhave taken positions to participate in competitions for the equipment of the infrastructure and supply of rolling stock.

Initial fleet. In a first phase, Fonatur will order 43 trains for the Mayan Train. The purchase budget amounts to about 40,000 million pesos (about 1,640 million euros)

Concerns. Fonatur has received nearly 2,000 questions from companies in what is known as the clarification phase, once samples of interest have been requested.

Calendar. The scheduled date for the presentation of technical and economic offers is set for April 26, and the award should take place on May 26.