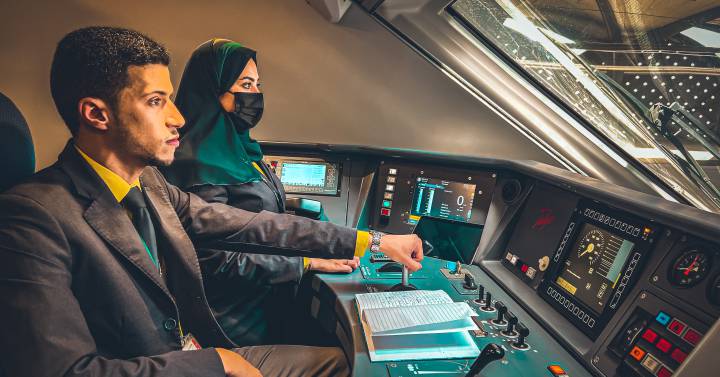 The 31 Saudi women aspiring to be high-speed train drivers who have passed the first training phase, of a theoretical nature, have begun to carry out internships in the cabin by Renfe, for its Haramain train in Saudi Arabia.

In this second phase, which will last between five and six months, the students travel as companions to train drivers on board commercial trains and drive effectively under the supervision of Renfe trainers, as reported by the operator.

They are expected to start driving alone in mid-December, being the first Saudis in the country’s history to carry out this profession. They belong to the ninth promotion of local train drivers of Renfe within the framework of the Haramain project, registering the highest proportion of applicants who pass the theoretical phase, since 34 women started it.

Theoretical training started on March 13: 483 hours in which subjects such as basic railway knowledge, traffic and safety regulations, occupational hazards, fire-fighting systems or technical aspects related to the train and infrastructure were taught. The practical part will have 674 hours, for a total of 1,157 training hours.

Of the 31 aspiring train drivers who have passed the first phase, six of them already belonged to the staff of Renfe KSA (the company’s Saudi branch). Their average age is 26 years and seven out of 10 have university studies, compared to three out of 10 of the rest of the promotions, all male.

The call for this promotion had a huge impact on Saudi society, to the point that 28,000 women signed up, of which approximately half took face-to-face exams. Of these, 145 were selected for the next phase, which consisted of a personal interview.