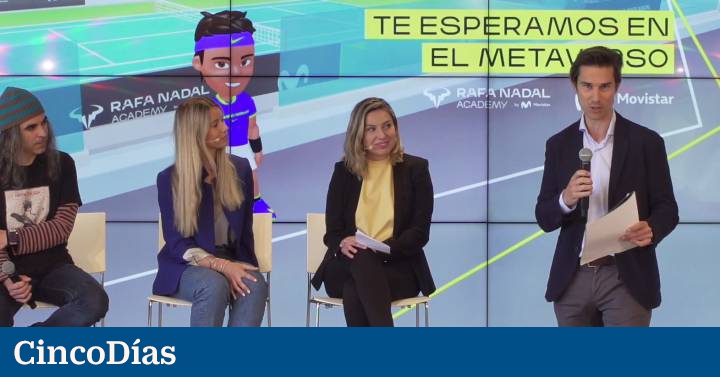 Telefónica has presented this Thursday in Palma de Mallorca its project “Metaverso de la Rafa Nadal Academy by Movistar”, a virtual space in 3D where users can learn about and interact digitally with the facilities of the tennis academy, one of the centers sporting reference of this sport worldwide.

This virtual experience includes games: users can unlock achievements and if they manage to complete all the missions that are set for them, they have the possibility of obtaining prizes through raffles. There are also several mini-games available, such as a virtual tennis training in which you can hit a ball, and you can also find the avatars of different characters with whom you can interact, such as the nutritionist Gemma and Toni, the director of the academy. The space also contains the 43 tennis courts of the royal academy plus two exclusive to the metaverse version.

Users can also choose Rafael Nadal outfits. Then some brief indications that indicate how to move through the virtual space. At the moment, the project still does not include access to the Rafael Nadal museum, which has the tennis player’s trophies and other relics donated or loaned by such important athletes as Michael Jordan, Lionel Messi, Cristiano Ronaldo, Fernando Alonso, Tiger Woods, among others. others. However, a spokesman for Telefónica has assured Cinco Días that it is projected to have this space completed within the next year.

The project has been developed by Telefónica, which ensures that its objective is to bring the new facilities and methodology of the Rafa Nadal Academy, a space that currently offers education to students from all over the world, to the younger audience through an innovative experience :“Digital identity is going to be very important. We are interested in positioning ourselves as a technological leader for the metaverse. We have a strategy that has to do with NFTs and the multiplayer experience, but we will see that later”, assured Yaiza Rubio, Chief Metaverse Officer of Telefónica. Rubio also says that she is collaborating with Facebook to further develop these technologies.

The tennis legend, Rafael Nadal, has also commented on the launch: “I think it is a very positive project that will allow anyone to know our facilities and programs from anywhere in the world and in a fun way”

Chema Alonso, Chief Digital Officer at Telefónica, explained: “With this new project, Telefónica demonstrates its strong commitment to continue delving into and exploring the technological possibilities offered by Web3 or the metaverse.”

The virtual space has been presented simultaneously at the facilities in Mallorca and in a virtual 3D press conference that people from all over the world have been able to access, both from computers and mobile phones.

Other Telefónica projects are added to this new project, such as the digital twin of the 2021 Mobile World Congress, the metaverse developed for the 2022 MWC, the collaboration with Meta to jointly explore network technologies for the metaverse or, more recently, the creation of a collection of NFTs based on a collection of drawings by Ferran Adrià that included a 3D virtual tour of the exhibition.

Interrupted the high-speed line in Catalonia due to material theft

What do sperm whales talk about? Scientists at the University...